Her Name is Rio

The journey to Rio began with an early morning call from Blas who made sure we awoke in time for the border crossing and flight. We said a fond farewell to him before climbing into our taxi.  Thankfully, our driver got us to the customs point just before a coach load of tourists arrived. Good news for us as we were through in no time and soon checking in at the airport. 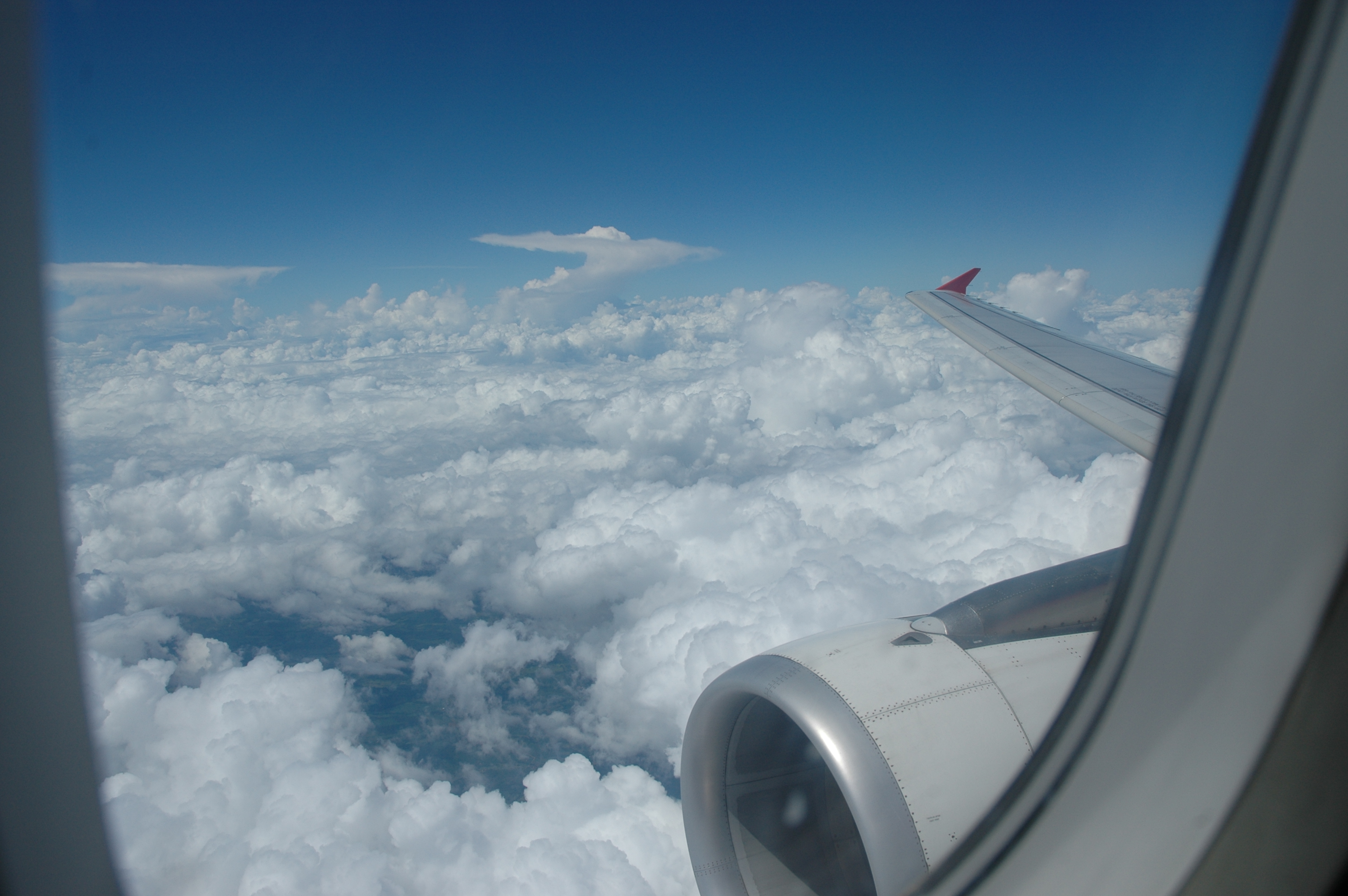 A mere 90 minutes later and we were landing in Rio de Janeiro. We were all a little surprised to see the mist and rain. It was a bit like landing in Manchester airport but much, much warmer.

And now let me share my traveller wisdom…never try to draw out money when you are tired, distracted and feeling a little under the weather. Throughout South America the cash machines had dispensed the cash first and then returned your card. But in Brazil it was the other way around.  After waiting for some time with the money safely in my purse my card was nowhere to be seen.

And here we experienced first hand the Brazilian kindness. A lady who worked for one of the airlines, who had clearly just got off duty and was no doubt itching to get home, tried to help. While she phoned the helpline and had a block put on my card, the airport police cordoned off the machine so no one else could use it and risk losing their own card or taking mine. Thankfully the money had come out first or we’d have been totally stuck.

Trying to put the whole card incident from my mind and determined to get to HSBC as soon as possible we hired a taxi to take us to Casa 48. This would be our home while we stayed in Rio and we were in for a treat.

Casa 48 is nestled down an alley, clinging to the hill side in the Favelas near Santa Teresa. Once the home of the fabulously rich with homes to match, the hills had been abandoned once the link tunnel to the coast had been opened. The rich flocked to the ocean side and the Flavelas became the haunt of the poor, down at heel and criminals. 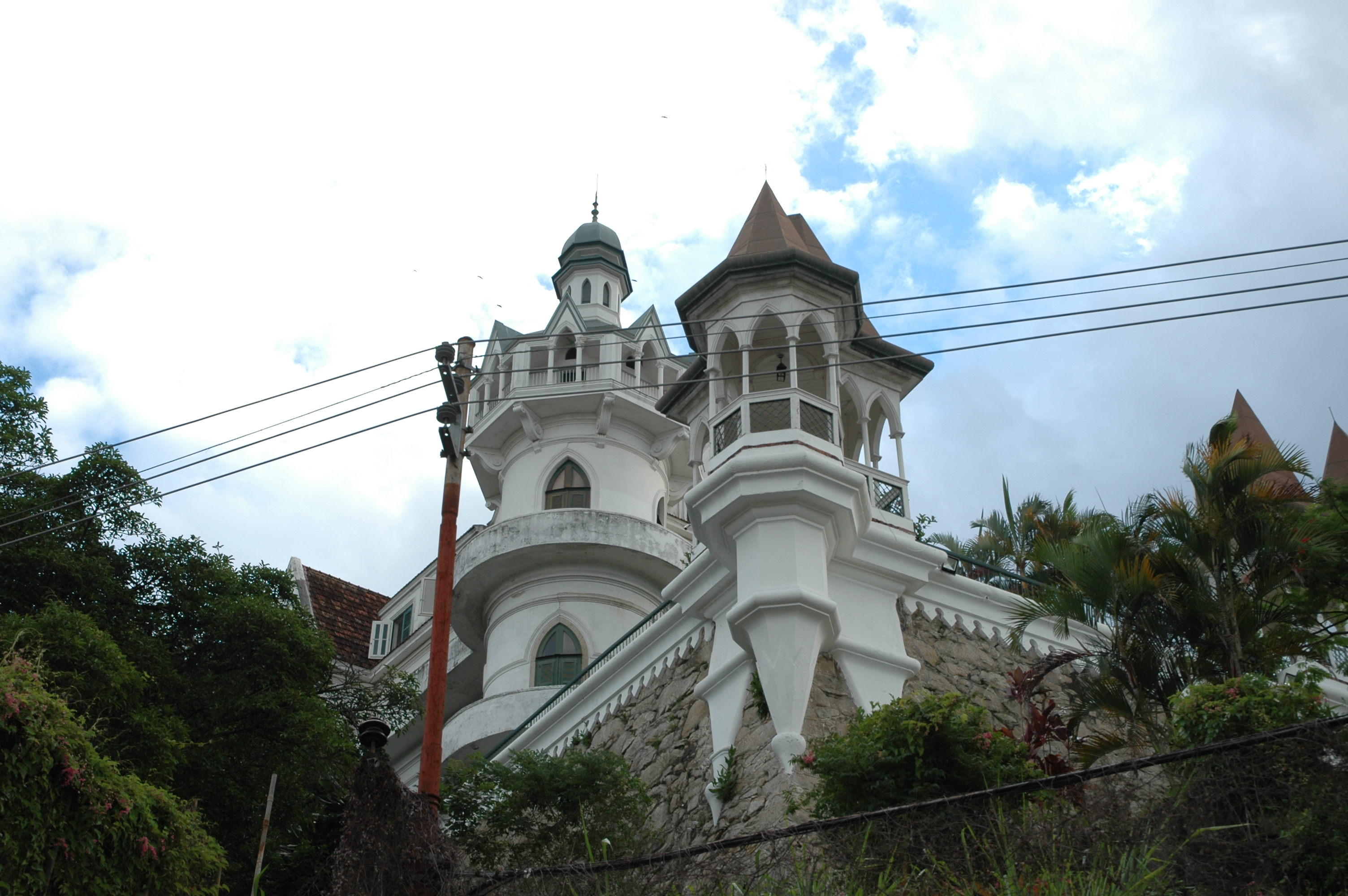 Like many places facing regeneration the flavelas are now achingly cool and Bo Ho Chic to the max. Yes there is still poverty and yes there are still problems but we encountered nothing but kindness and good will.

The taxi driver who had modelled himself on Ayrton Senna dropped us at the bottom of a steep path that wound up beyond sight. Staggering up this incline with full rucksacks in humidity and heat was an experience. But the sight of the artistically decorated Casa made it all worthwhile. 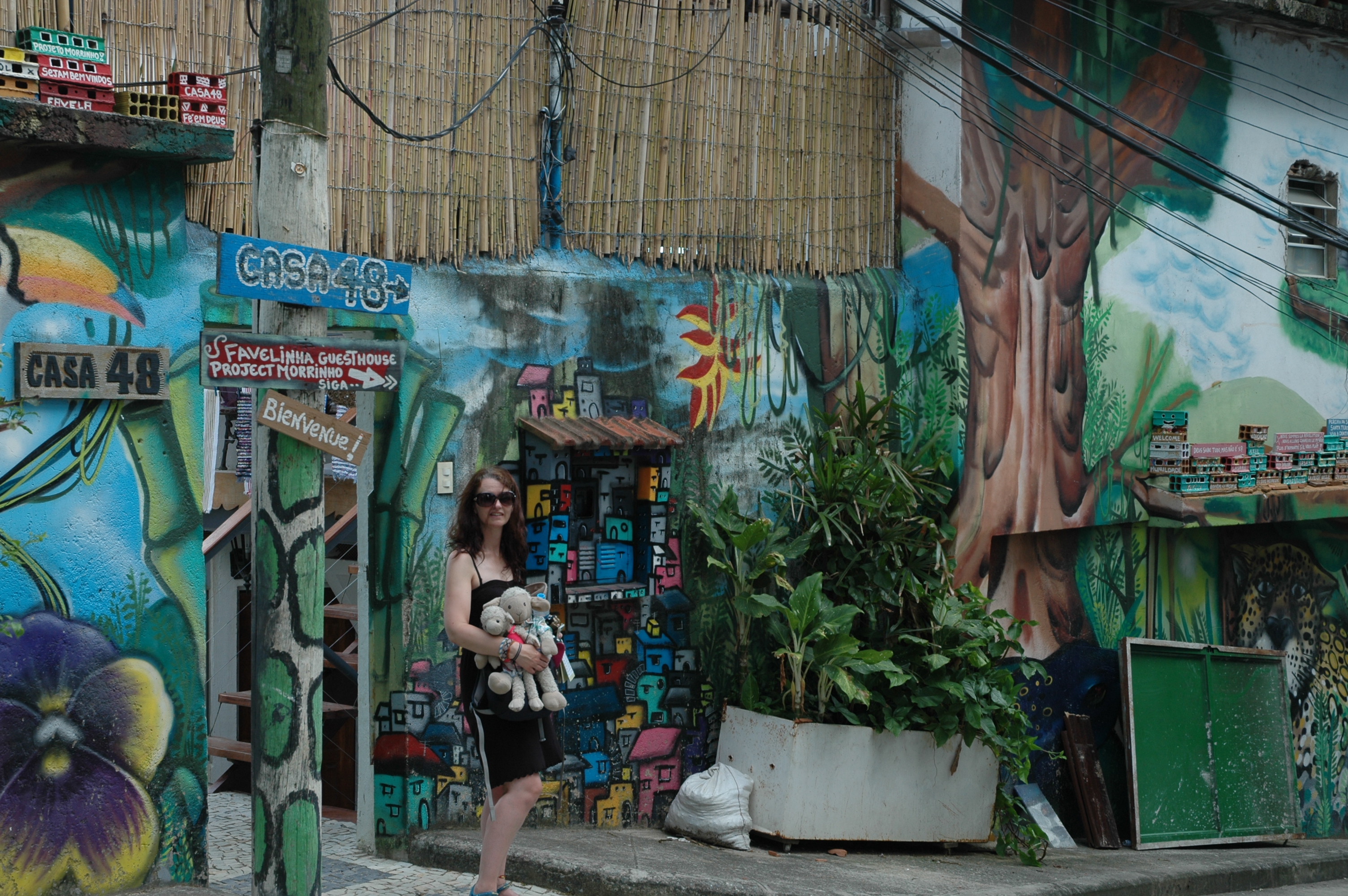 Several of the locals said hello with beaming smiles as we passed. All in all we felt very welcome already. Our French host Valentine who manages the accommodation with his Brazilian wife Agnes showed us in and suddenly, right there was the view. Exactly as it had looked on the booking site. Wow and wow and wow! Rising from the sea like something from the time of the dinosaurs was Rio’s famous Sugar Loaf mountain. 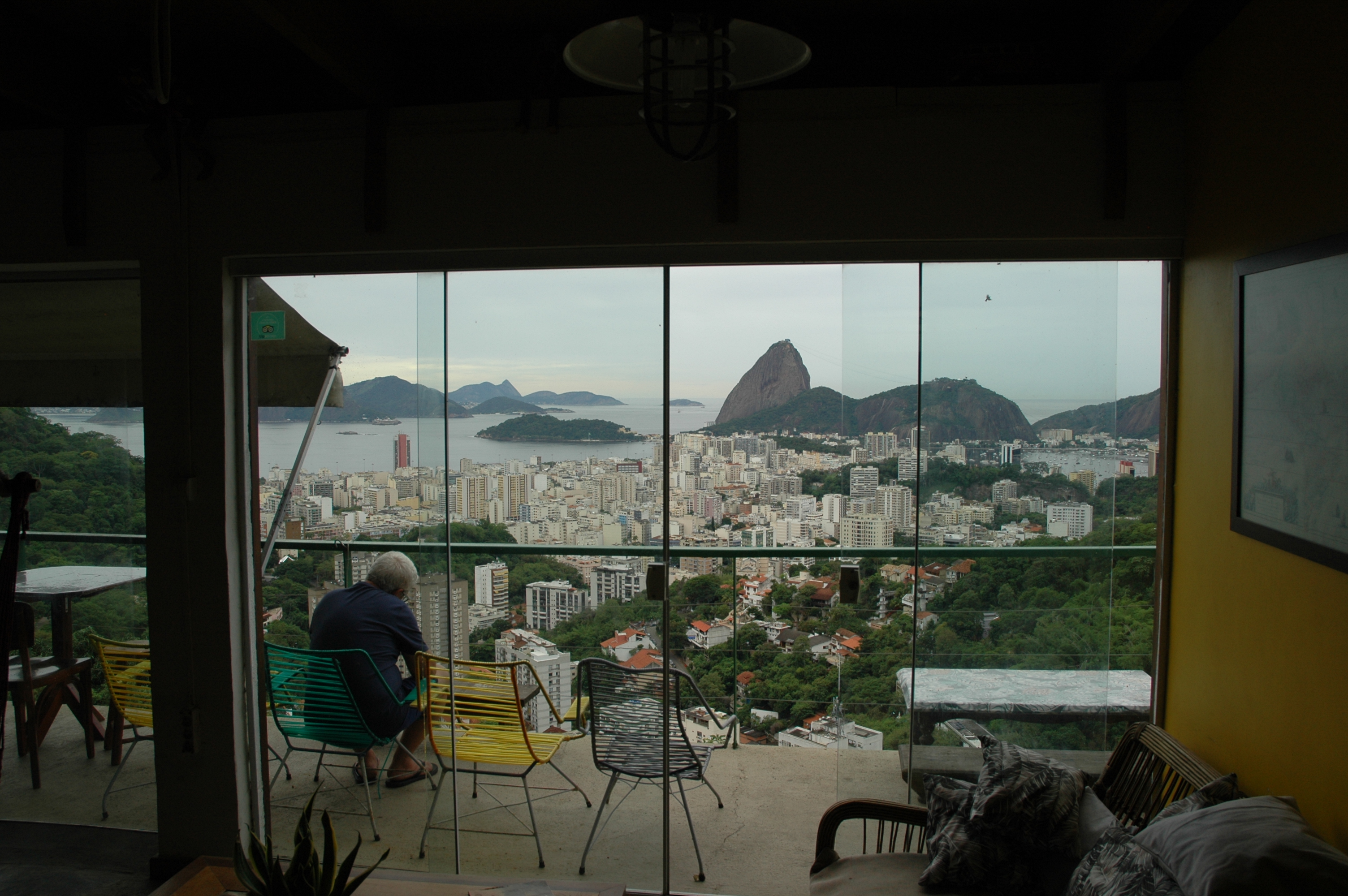 Valentine made us tea and then we spotted a cocktail list… Caipirinhas. When in Rio and all that. For the next hour we sat on the balcony with a very Brazilian cocktail enjoying a very Rio view. Perfection! 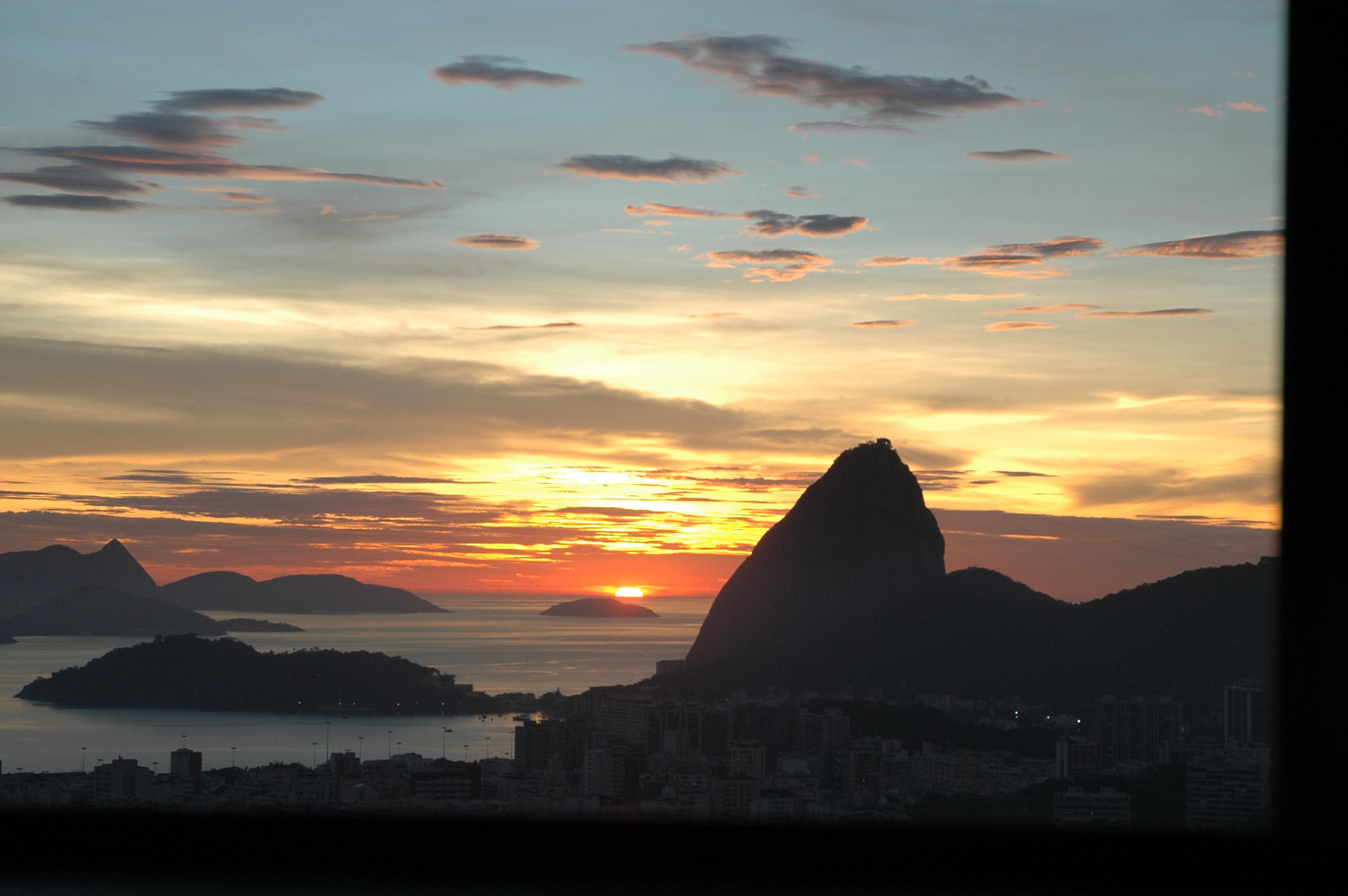