I’ve spent Christmas away from the UK before – both times in New Zealand. One of those Christmas days, it poured down, the other was not exactly clement either. Christmas in Buenos Aires would be very different. HOT! And with the bluest sky I’ve seen. 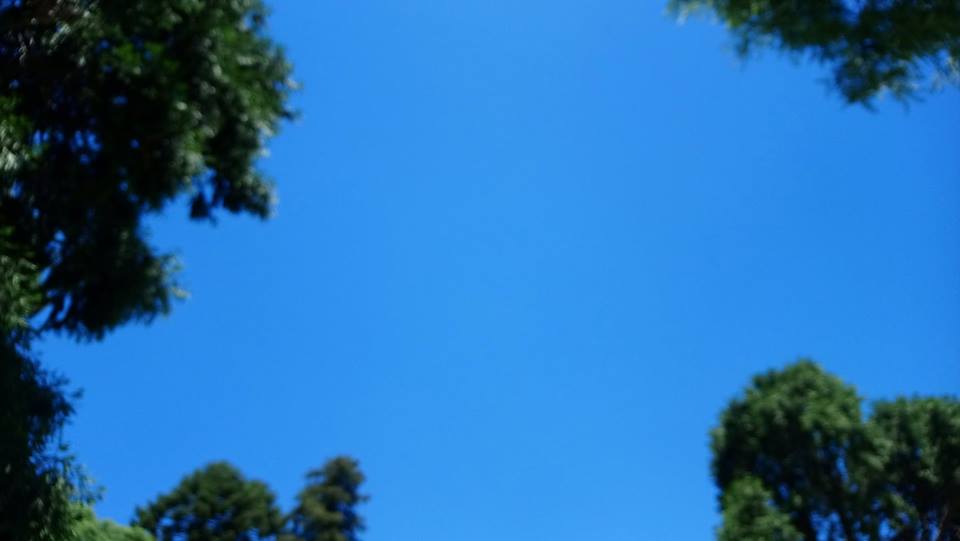 Unlike home, Christmas Eve is very low key in Argentina. Restaurants close early, bars aren’t open and it’s definite family time. Warned by our hotel that if we planned to eat we’d need to be in the restaurant by about 3.00 we followed their advice.

Before we’d even ordered desert, the doors to the restaurant had  been closed for the day and as each remaining customer left, the door was locked behind them.

Armed with wine we stayed in our hotel room – the strangest Christmas Eve I’ve spent for a long time. Christmas lunch proved strange too as we made do with a Subway salad! Stanger still, because it was so hot, I didn’t even miss the turkey and pigs in blankets! By evening Buenos Aires was back to its usual buzzing self and we headed down town to an Indian restaurant for Christmas dinner part two. Certainly not the culinary experience we normally have on Christmas Day. 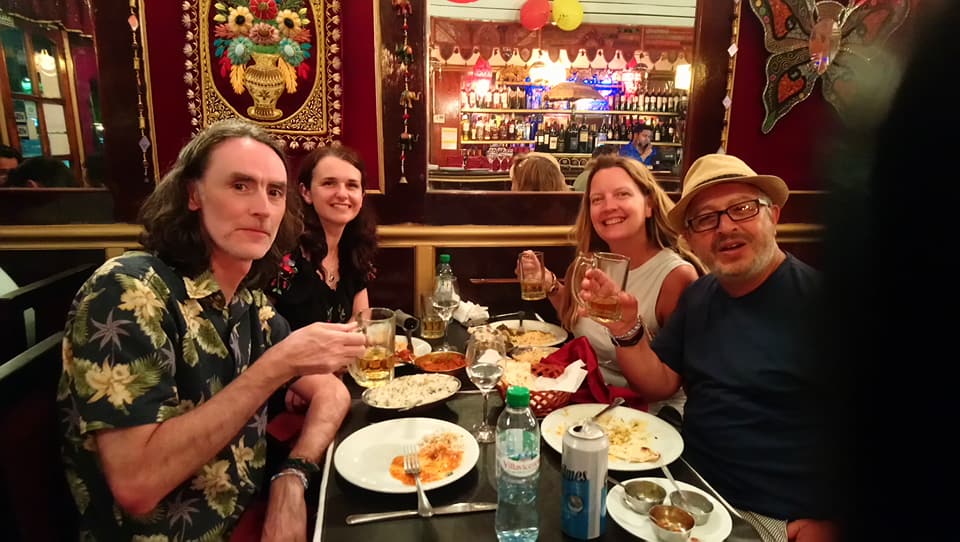 So what other delights did we enjoy while in Buenos Aires?

The Argentine Tango on the street was something to see. The theatres who put on regular shows use this as a way to bring in custom. I can see why it works as you can’t help but be drawn closer to watch them. The very next day we booked one through our hotel but more of that later. 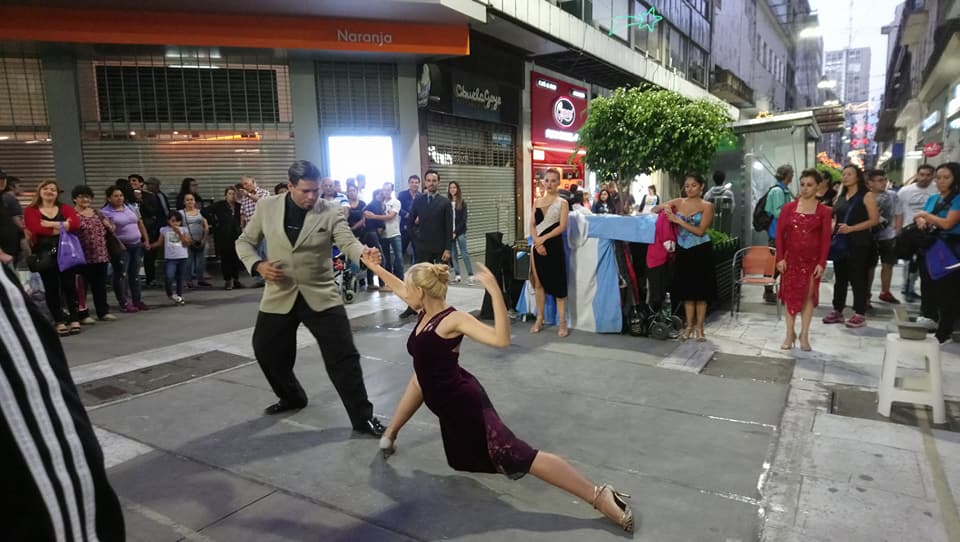 The Flea market which occupies streets just off the Plaza de Mayo was definitely worth a visit. The narrow streets were lined with stalls selling everything from beautiful artwork to the usual tourist tat. Never one for too much shopping there were other delights too.

In a city where music and dance is so revered it will come as no surprise to hear that the streets had plenty of this on offer. In tucked away bars, dancers performed the more traditional tango which is more flamenco like in movement. And in an open air bar on another street corner a band belted out Rolling Stones classics much to the delight of the multi-cultural crowd watching. 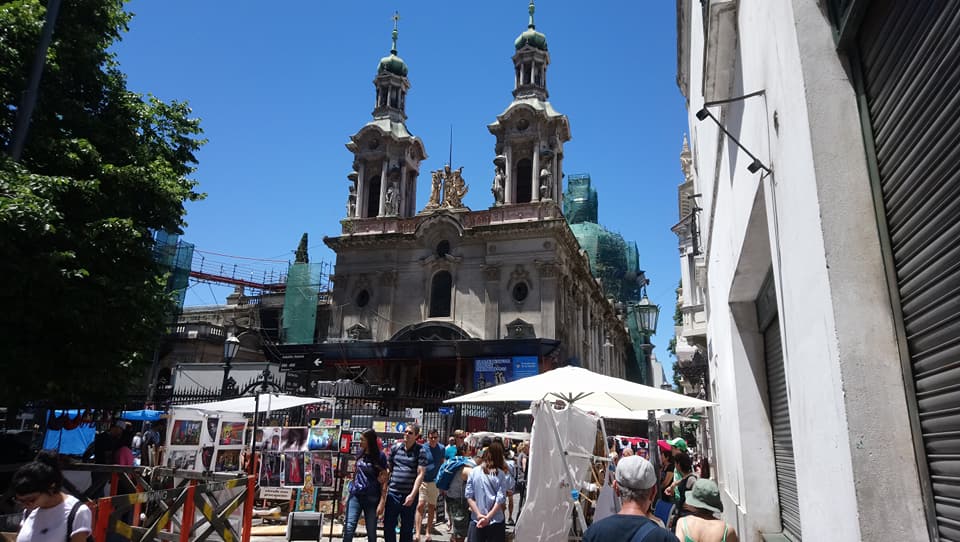 We couldn’t visit this city without going to see the monument for the Falklands War. The memorial is simple, beautiful and poignant.  Guarded 24 hours a day by the air force, military and navy who take their turn on a two week rota, it is a calm and peaceful place to remember the conflict and those who lost their lives. 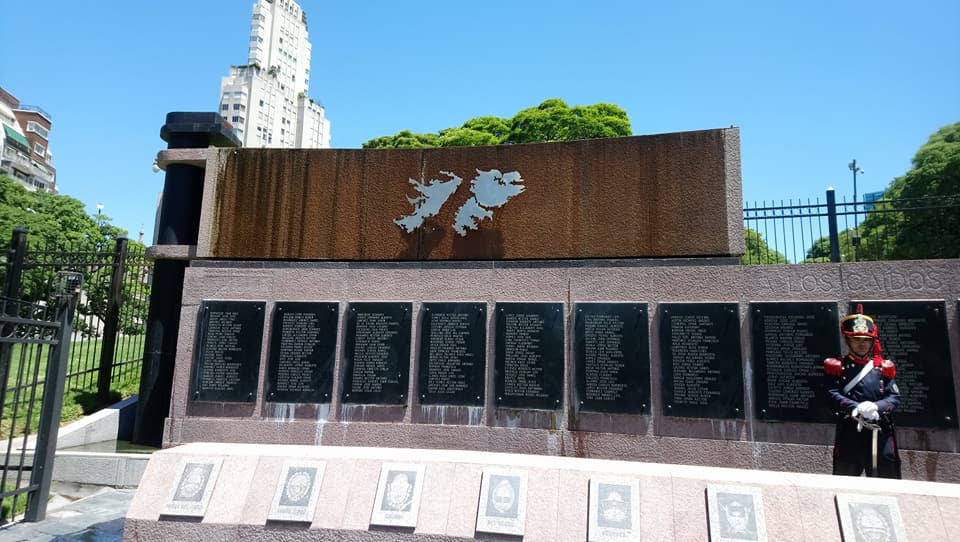 And, we had one more unforgettable experience to enjoy – a live Argentine Tango show. These run every night (apart from Christmas night) and are definitely worth booking on to. Obviously, they are geared up for tourists and some people may sneer at the lack of authenticity of some but we had a great time.

Our particular show charted the Tango and how it had changed, developed and moved with the times since it was first danced in the late 19th Century. It was breathtaking! Their legs move at such a speed and yet with such control and elegance. The music was spine tingling and there was a witty and humorous compere (well we assume so as everyone kept laughing!).

However, what made it particularly enjoyable for Helen and I was the fact that both Kass and Dom were invited to be part of the show. Kass went up on stage while one of the dancers showed him what to do and Dom donned a hat and headed down the central aisle with a dancer who reassured him “Don’t worry, you’ll be fine!”

Unfortunately, I managed to leave my phone in the taxi on the way home that night so these wonderful moments are lost forever.

Christmas in Buenos Aires had been different yet fun. And none of us had even so much as missed the cranberry sauce and egg nog!