I know the last post ended with myself and Dom arriving in San Pedro de Atacama in Chile but I hope you’ll forgive me if we back track just slightly for this one.
The journey across the Atacama had been one of the highlights that Dom had really looked forward to. The driest desert in the world, it covers a stretch of 600 miles and has been used as a backdrop for documentaries and films including Quantum of Solace.
What really strikes you is the colour. Every shade of orange, yellow, terracotta, beige and red imaginable. Vast spaces, mountains, rocks that have been carved by winds into weird and wonderful shapes. It really does have a sense of the ‘other world’ about it. How to capture all this in words or photographs is another matter. 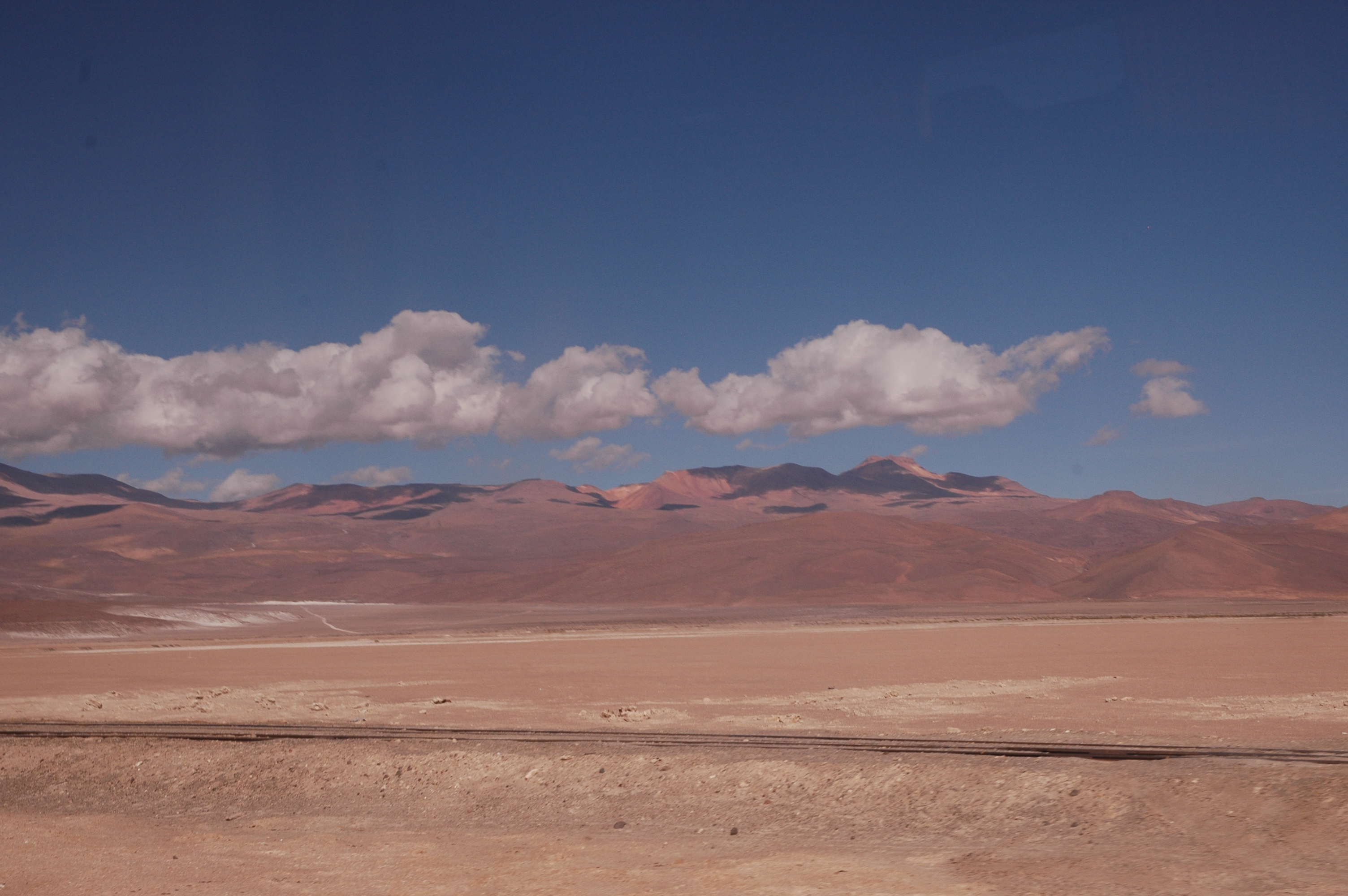 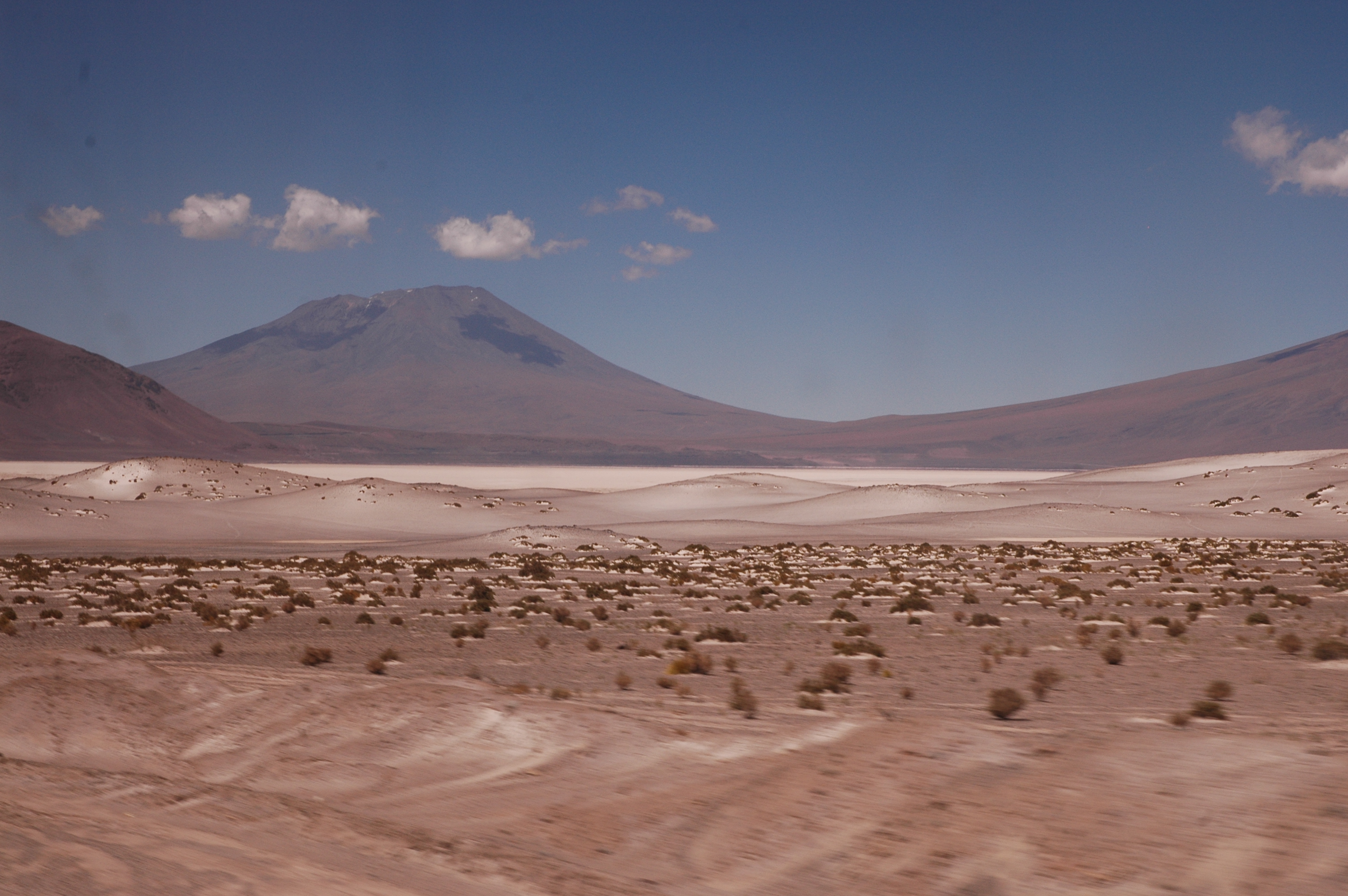 The journey across the Atacama involved a border crossing between Bolivia and Chile. Up until now these crossing experiences had been fairly straight forward and easy going. Documents had been shown and passports stamped. This was to be a little more long winded. Plus we were on a bargain basement bus with no air con and no toilet facilities. I’m just glad our stomach worries were over…

Four hours into the journey, we arrived at the checkpoint which was a tin shed in the middle of the dust with some attractive looking drums on trains. The road itself barely looked a like a road apart from all the lorries, coaches and vehicles waiting to continue along it. Having presented the correct paperwork (you have to keep every bit of official looking travel document, ticket etc just in case) we were back on the bus. 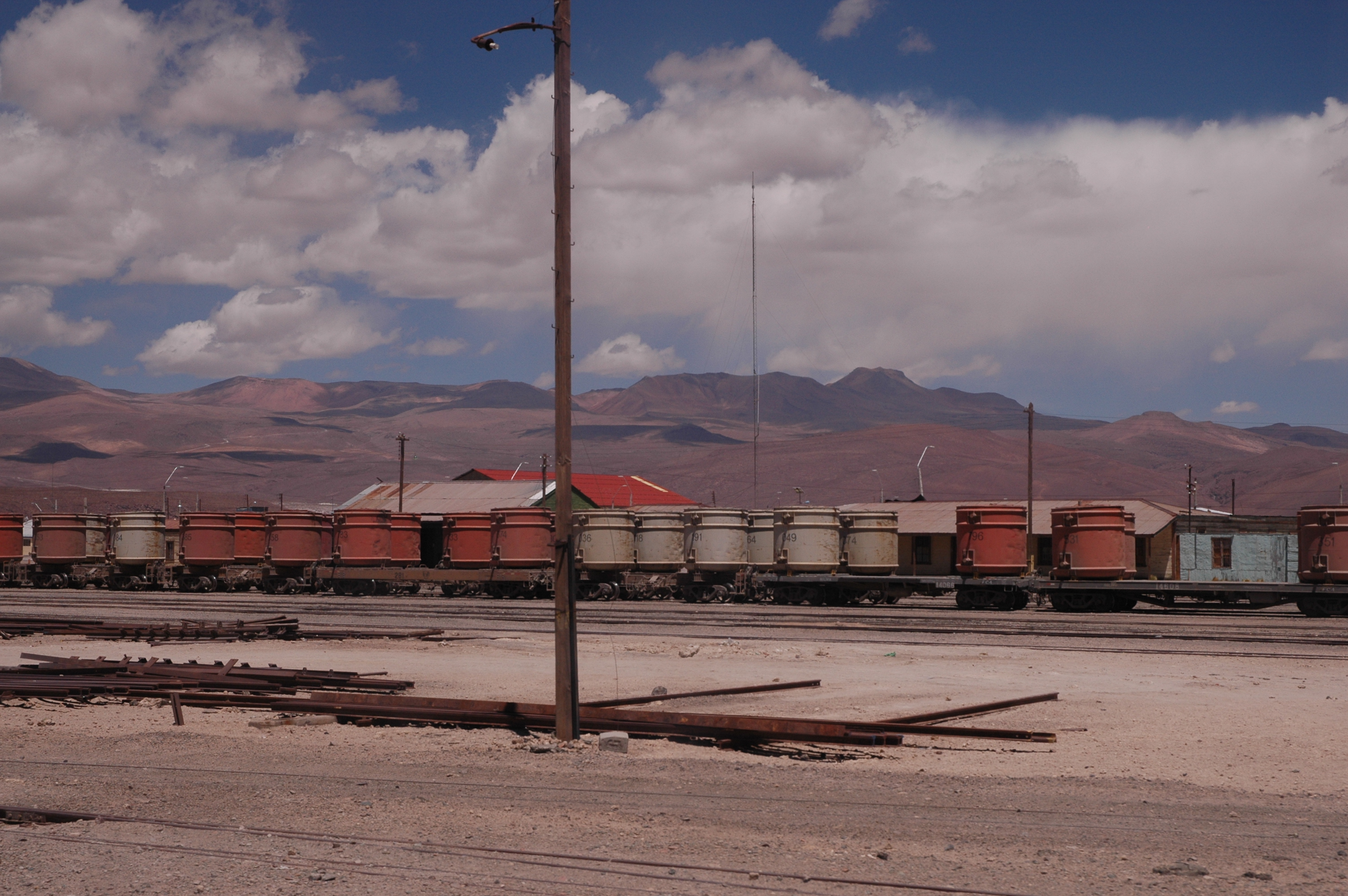 Well that had been painless, what had all the fuss been about? A mere half a mile up the road we found out when we pulled up next to another coach, and luggage and passengers were swapped. The bus now had air con but still no toilet!
The bus travelled for less than a minute before pulling over again. A lady came on to collect Chilean and Bolivian ID cards. We waited on the bus. The ID cards were returned 20 minutes later and everyone was then asked to get off the bust taking EVERYTHING with them.
Customs forms were filled in and a queue was joined. As in all the other checkpoints there is only ever one person waiting. Lots of people milling around in the background, eating lunch, drinking coffee but only one on the actual window! Finally, we were ushered out to a three sided shed with benches around the outside. On the ground in the middle was our luggage. 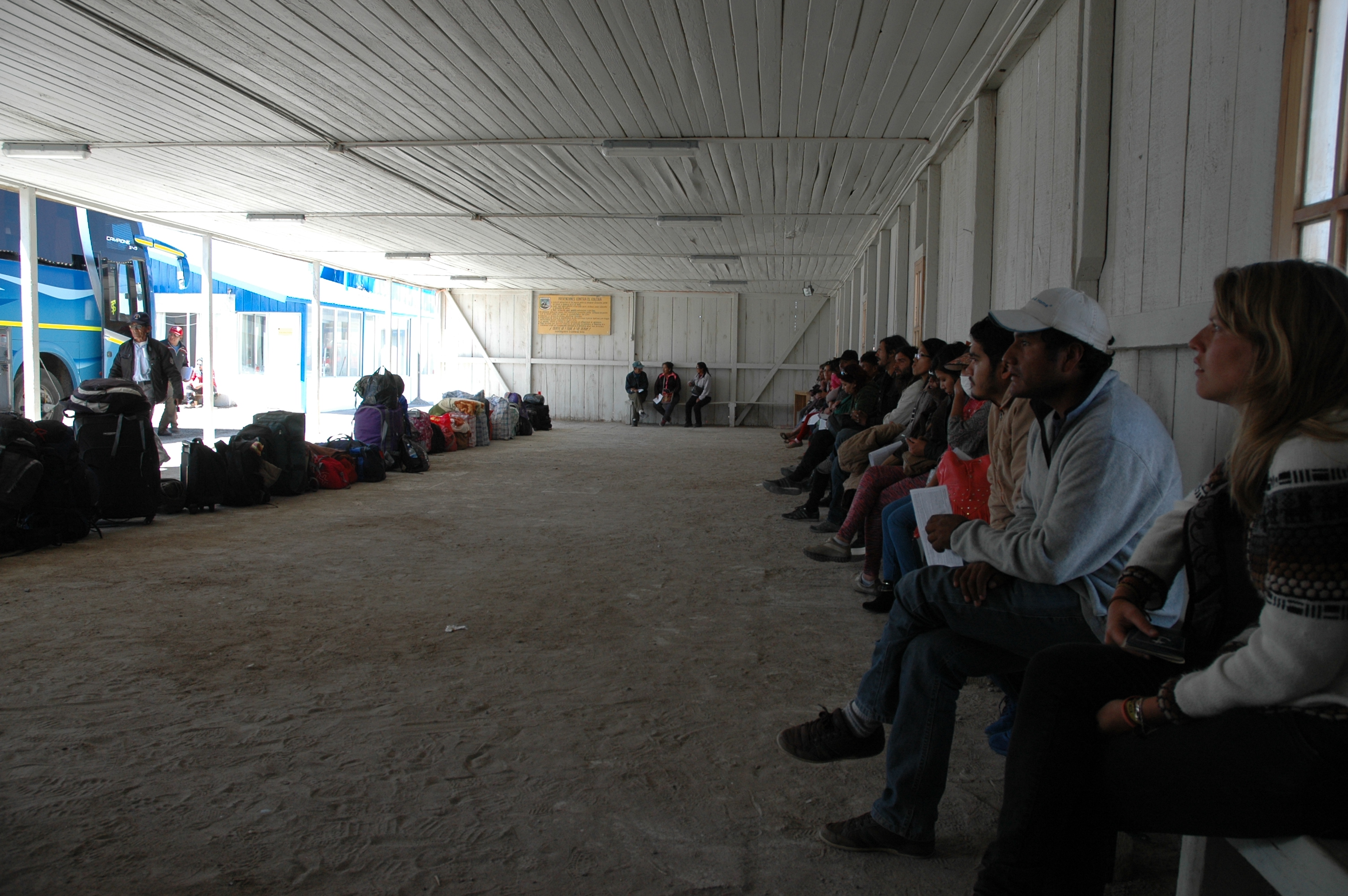 A sniffer dog was then led out and sent to sniff the luggage with a different scent to chase each time. I’ll just point out that there were NO children on our coach and our backpack with cuddly mascots Lamby and Flossie stood out like a sore hoof! The guard kept bringing the sniffer dog back around to give them a good sniff. He obviously thought they were suspicious. The jokes we’d made about Lamby being strip searched were looking more like a reality by the second.

Ordeal finally over we returned to the coach only to be directed into another building with our luggage. Not content with the sniffer dog, the officials now searched every single bag by hand. Dom gave the lamb bag to me! Just as well as I had to explain who they were and give the lady one of my business cards to prove it.

Eventually we were allowed back on the bus. The whole process had taken a good three hours.
The rest of the journey across the Atacama was uneventful and we could enjoy the colours and scenery in peace. 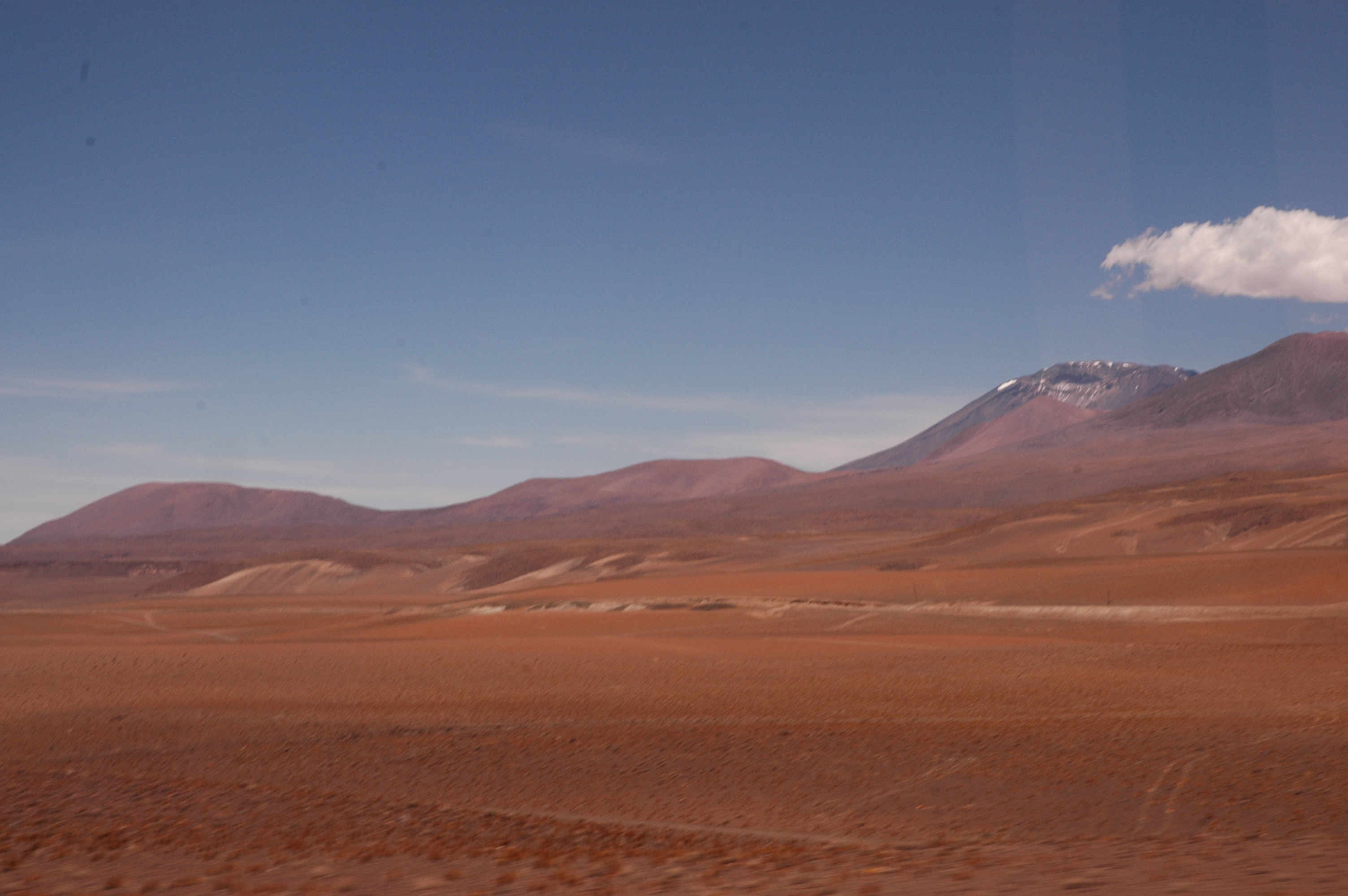 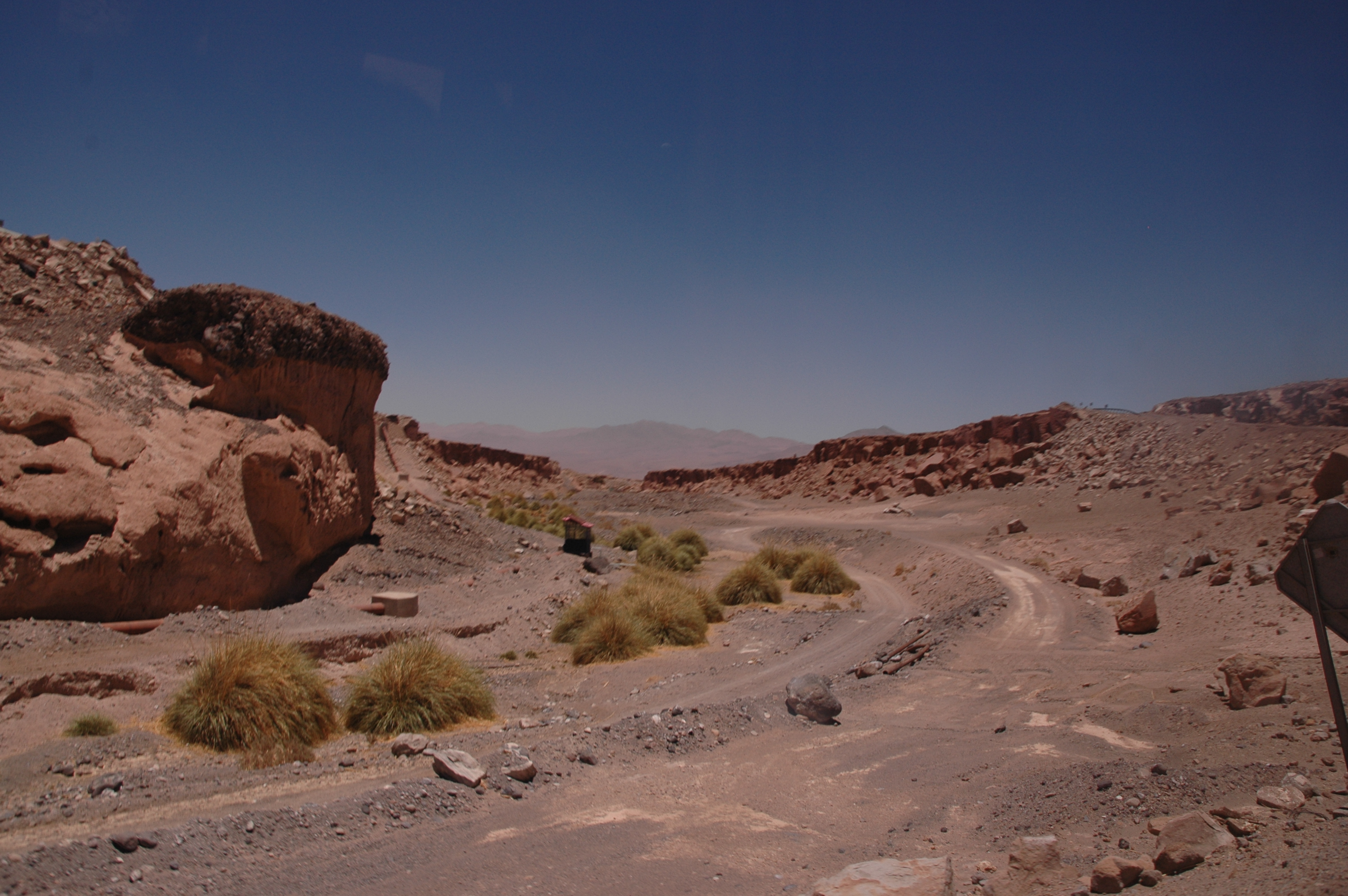 The road into San Pedro de Atacama itself was full of spectacular rock formations and stunning scenery. This is what we’d come to see and despite all the faff on the border, it was worth it.