Salt flats here we come! Having had our welcome from Carlos we were split into groups of six ready to get in our jeeps. Along with myself, Dom, Helen and Kass we were joined by Pedro and Luis from Brazil. And it will come as no surprise to hear that their English was brilliant too! We must try harder in the UK. 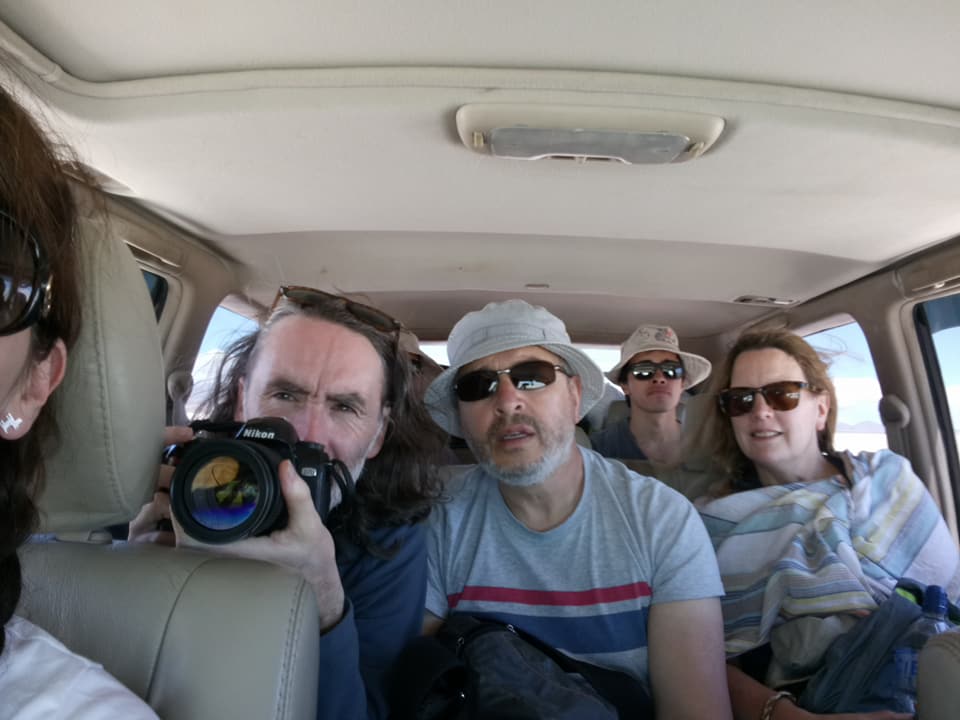 The driver welcomed us with a titanium smile and proceeded to select his music and turn it up for us all to appreciate. We didn’t. Listening to crap pop music (Barbie Girl being just one of the tracks on offer) while trying to enjoy the sights was not really our idea of fun but he was very reluctant to turn it off. Obviously the customer is not always right!

The convoy of jeeps set off along dusty roads which suddenly opened out into a desert. We didn’t travel far before coming to a halt by the Train Graveyard. Uyuni was the first place to get the railway in Bolivia and it was central to import and export. That has all changed now and although the trains still come to Uyuni they are very different from the trains we were looking at. 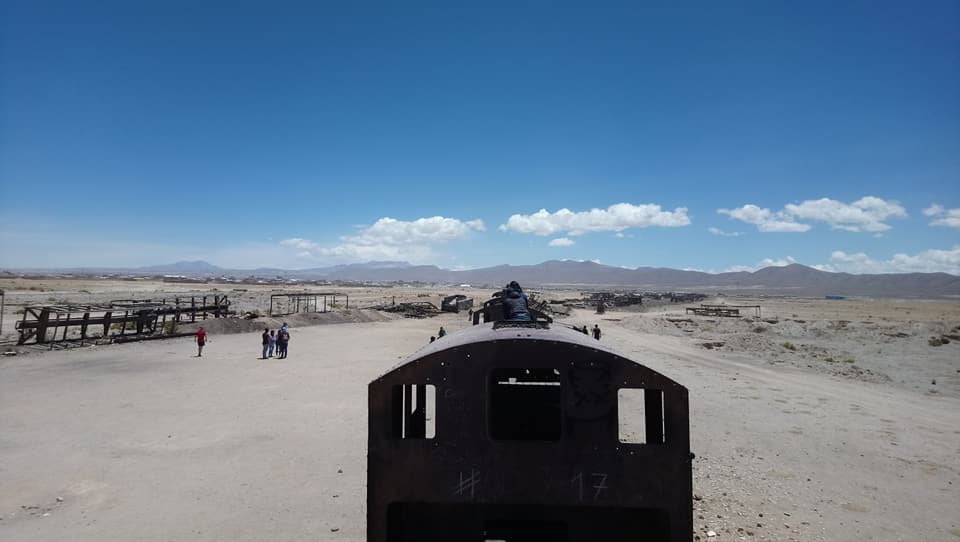 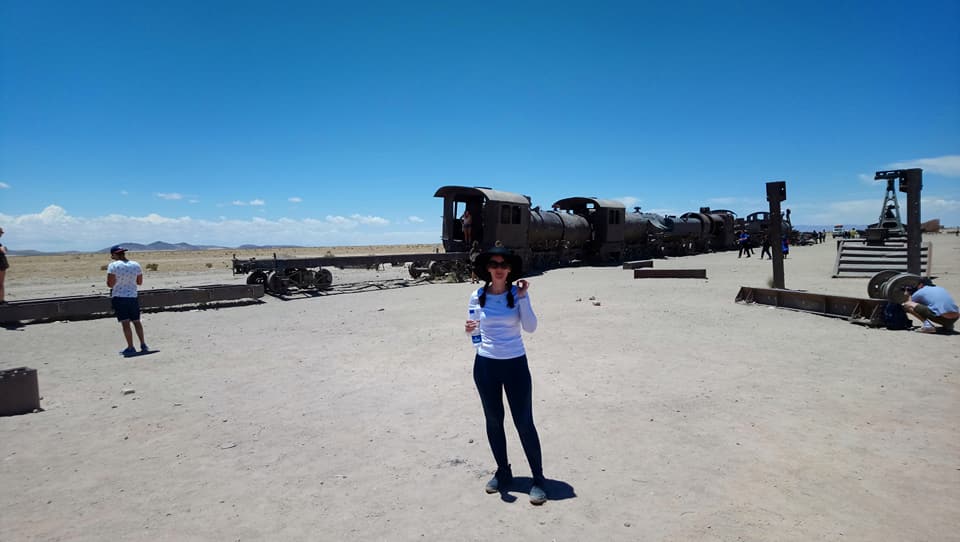 These metal ghosts are from another era. Steam trains in varying degrees of disrepair and collapse had been left to rust in the sun. They looked like something from Back to the Future III. Oddly eerie and forlorn we scrambled over them for photos. At this point Carlos confused us all by telling us to pose “Like sexy llama” (pronounced yamma). None of us were quite sure what a sexy llama looked like but we gave it our best shot… 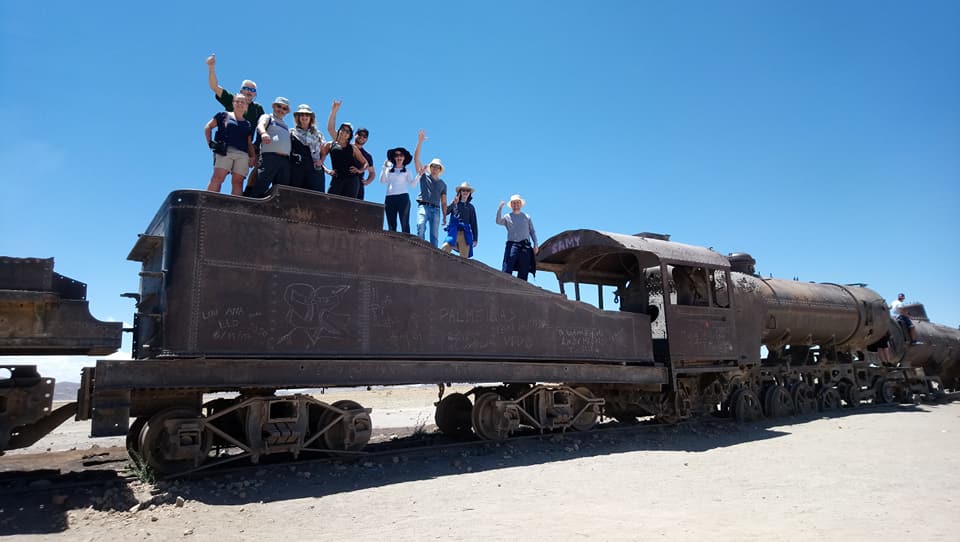 From the rusting trains we headed to our next stop Colchain.  This town is all about salt. Salt is mined there, the houses are made from it, they have salt sculptures. You name it everything is about salt. And of course, the inevitable market. I think it’s fair to say we’ve all got market fatigue and as we had spent most of our Bolivian money before we left Uyuni and we knew we’d need to buy toilet roll there were was little chance of the locals making anything from us.

After a tasty lunch of chicken and rice (Dom and I’s was cooked separately as it was Gluten Free, not sure how you make chicken and rice with gluten in but never mind) we were gathered into the jeeps once more.

And at last, the desert changed into the blindingly white, dazzling salt flats. Glistening like snow, the salt has formed hexagonal tessellation patterns that stretch for miles. It is truly breathtaking, staggering and beautiful. The noise under the tyres sounds like compacted sand but underfoot it sounds just like walking through crunchy, crisp snow. 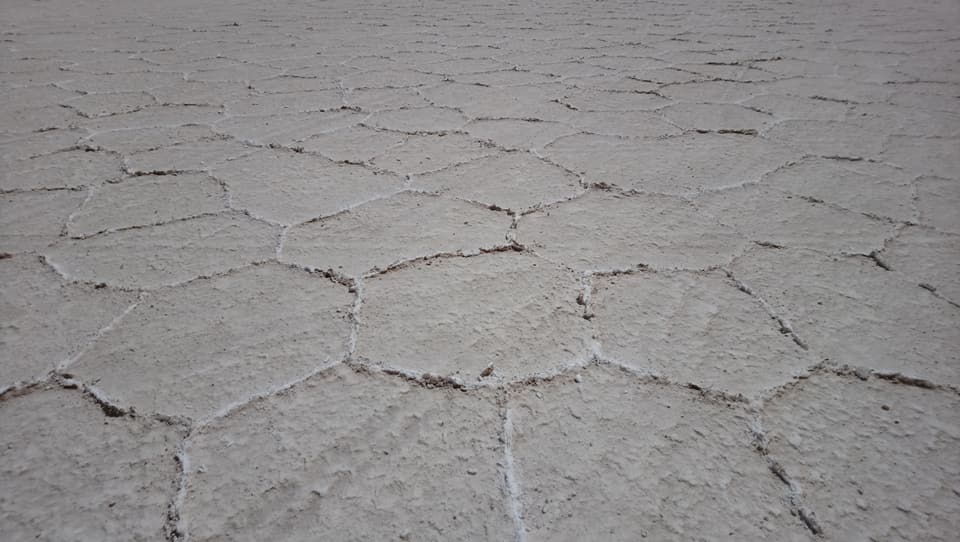 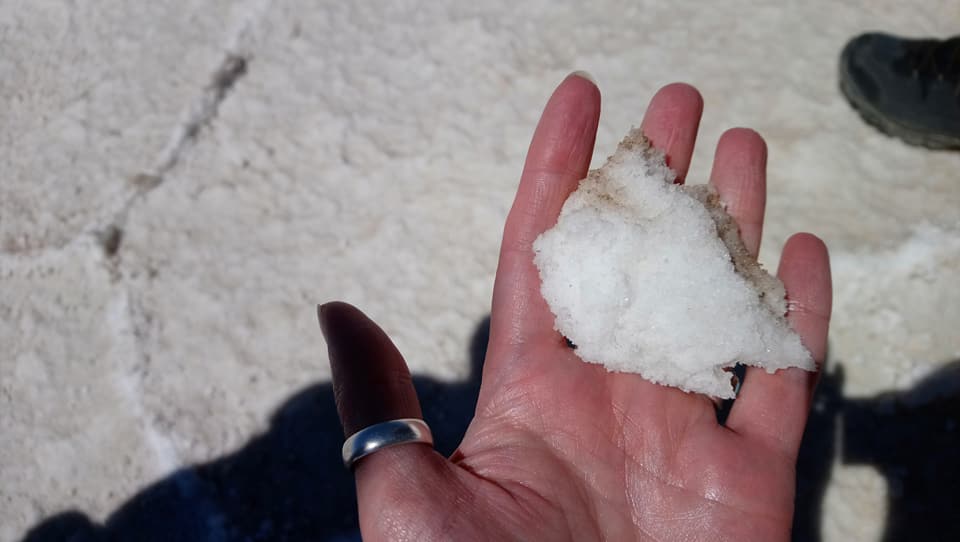 We stopped at the monument (made from Salt) from the Dakar Rally in 2016. Cue lots of photos. 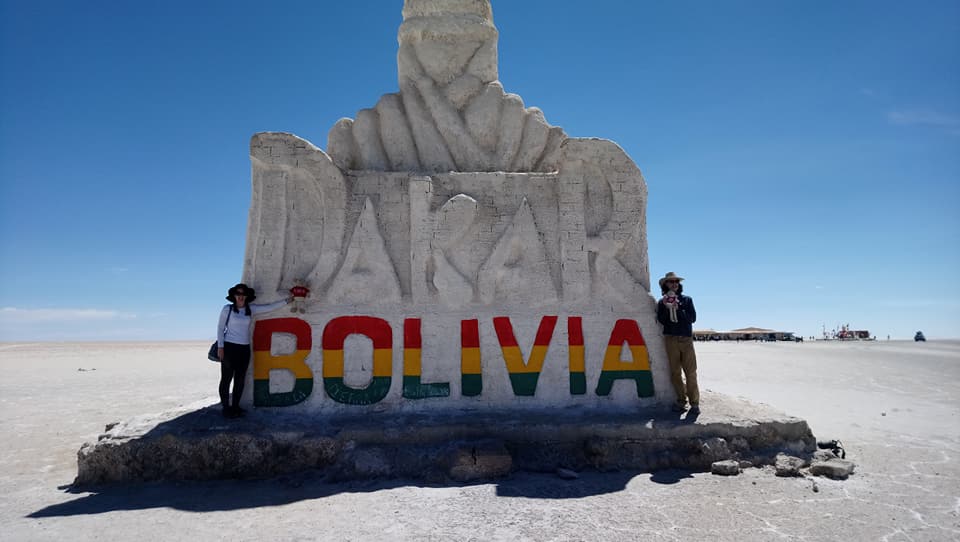 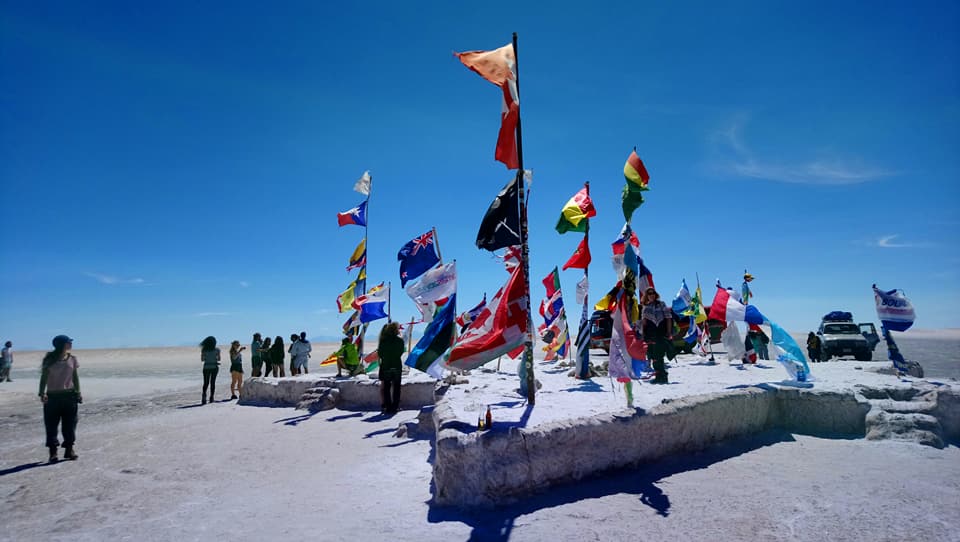 Back in the jeeps and a bumpy ride to what looked like the middle of nowhere – well apart from all  the other jeep tours. Here we had fun making all kinds of proportionally distorted photos. Carlos was very willing to photo us all in many different ways before letting us loose with some of his props. The dinosaur was particularly good fun. 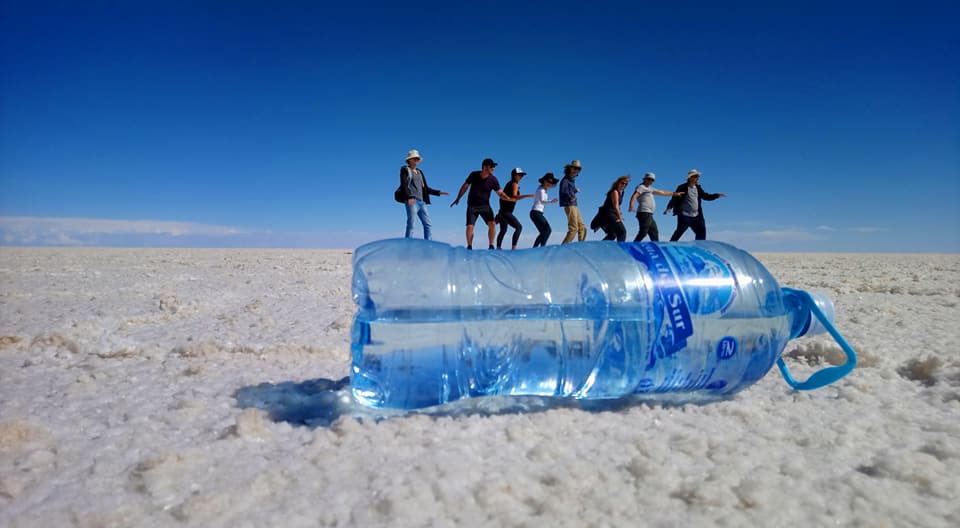 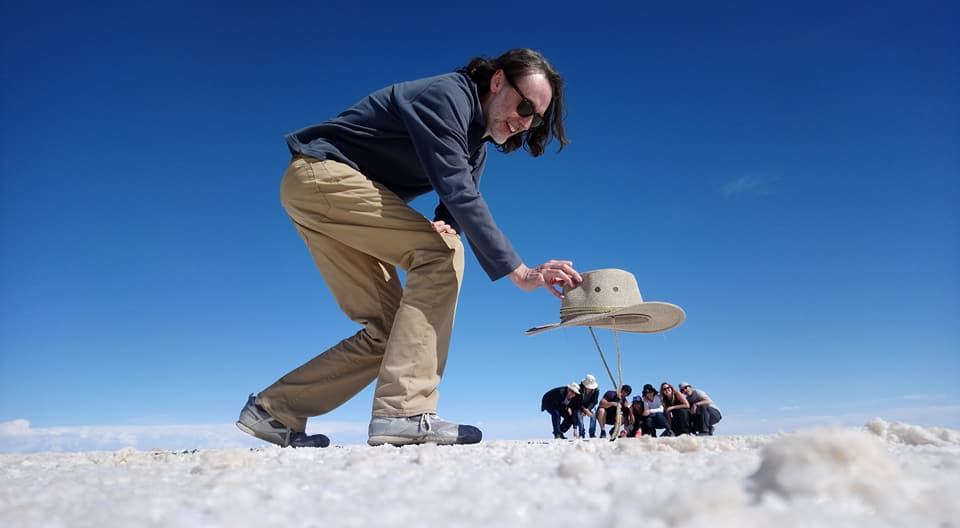 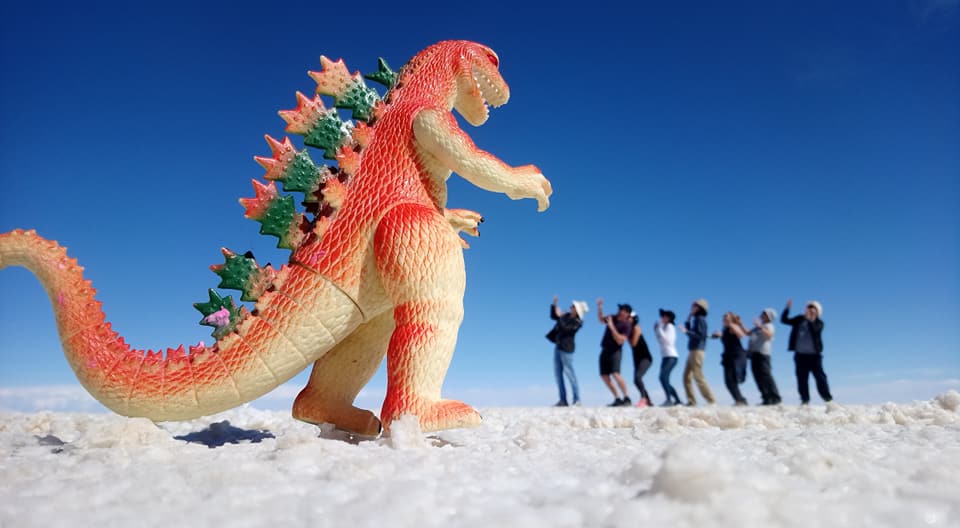 The salt flats are definitely worth going to see if you find yourself in Bolivia. They really do take your breath away and reflect the light back in a way I’ve not experienced anywhere else.

Would  I recommend you go with Red Planet tours – er no but that why will become apparent in the next blog!