Our first day in La Paz would be spent with Stef, a local guide who  would be showing us around the city including the famous Witches Market, the cable cars and the main square.

As mentioned before, La Paz is at high altitude – in fact as a seat of government  it is classed as the highest capital city in the world (Sucre is still the official non-government capital of Bolivia). This makes the simple act of walking around it really hard work. Your legs feel like lead, your lungs struggle to take in air and the fumes are ghastly. Poor Helen was really struggling and the fumes alone were making her feel really sick. The thought of spending most of the day walking around was not an appealing one.

However, Stef really made this tour interesting and fascinating. Like all our other guides, her English was excellent and she obviously knew the city like the back of her hand. Passing pretty colonial buildings we made our way down to the main square. Grand buildings with beautiful architectural features were dwarfed by a modern tower that looked like something Donald Trump would have commissioned. You can guess from the photo which building we preferred. 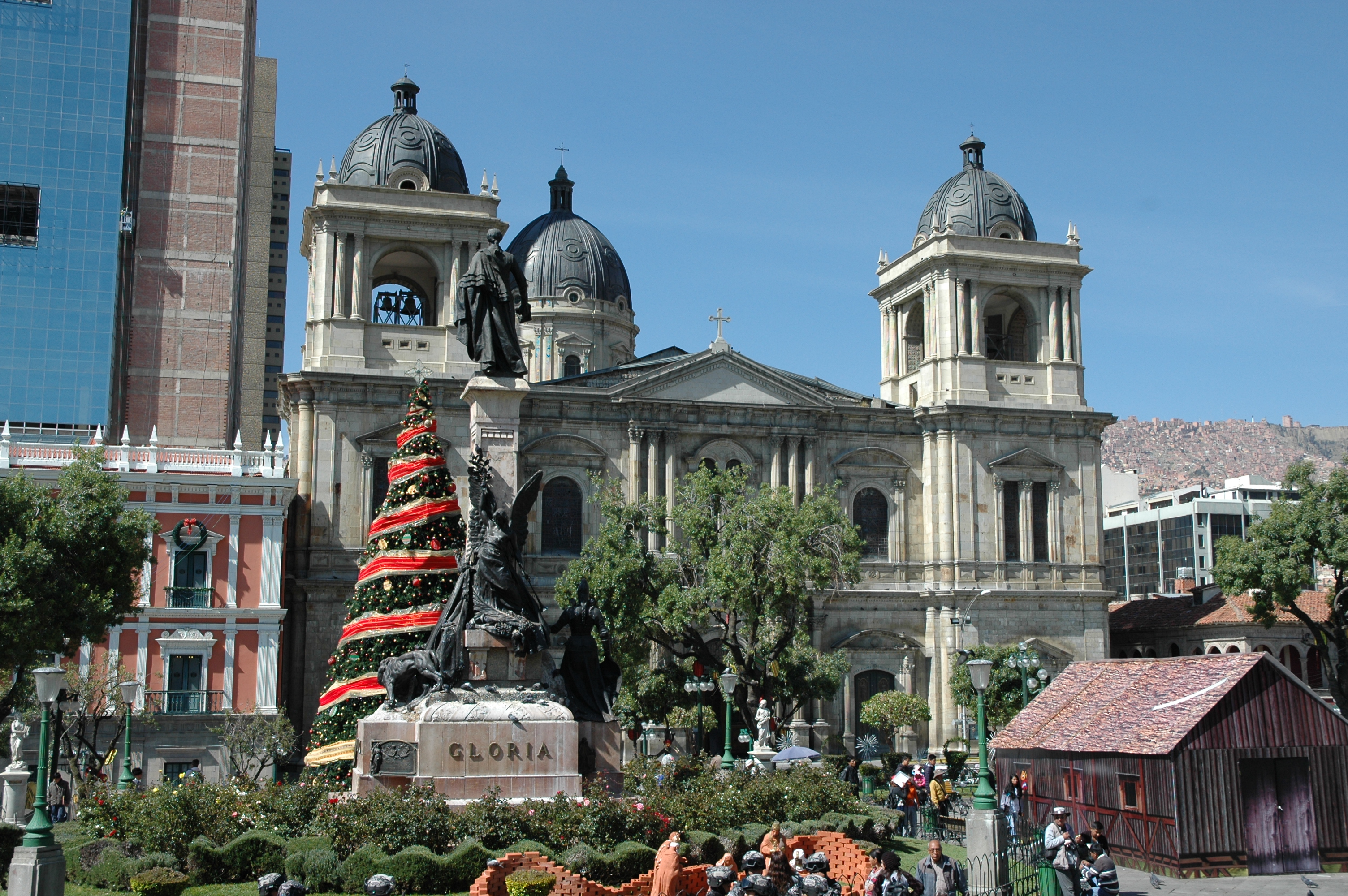 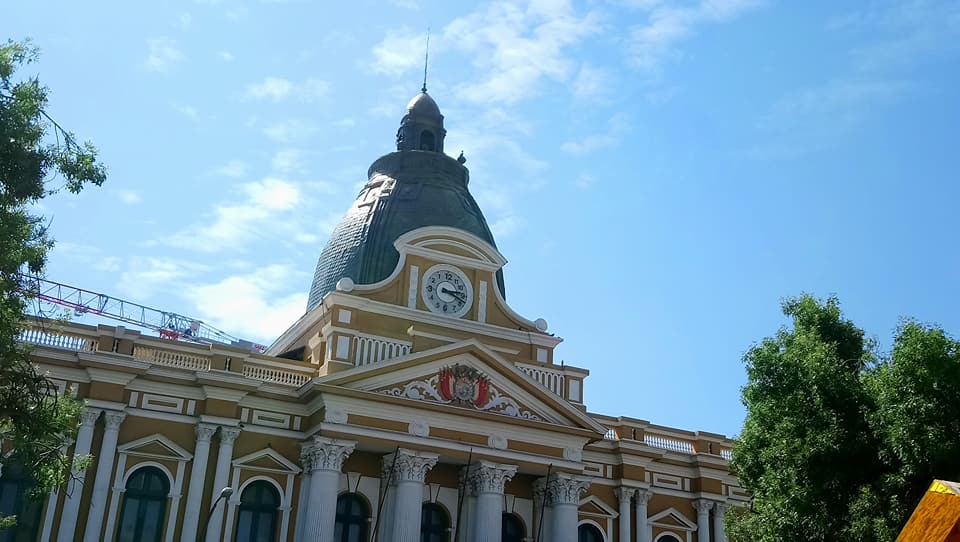 Here Stef told us some of the political background of Bolivia. The current president Evo Morales while originally welcomed as the first Aymara (Indigenous) ruler has now outstayed his welcome. Surrounding himself with yes men and women he is now deeply unpopular with much of the population. Corruption is rife and there are frequent demonstrations from dissatisfied voters. In fact just after Stef explained that the fireworks we would hear across the city were in fact firecrackers being set off to indicate the start of a protest, two or three went off in the square. Stef quickly led us away as when this happens the roads are blocked and people inside the barricades can wait hours to get out! Oh the irony of a city whose literal translation means The Peace! 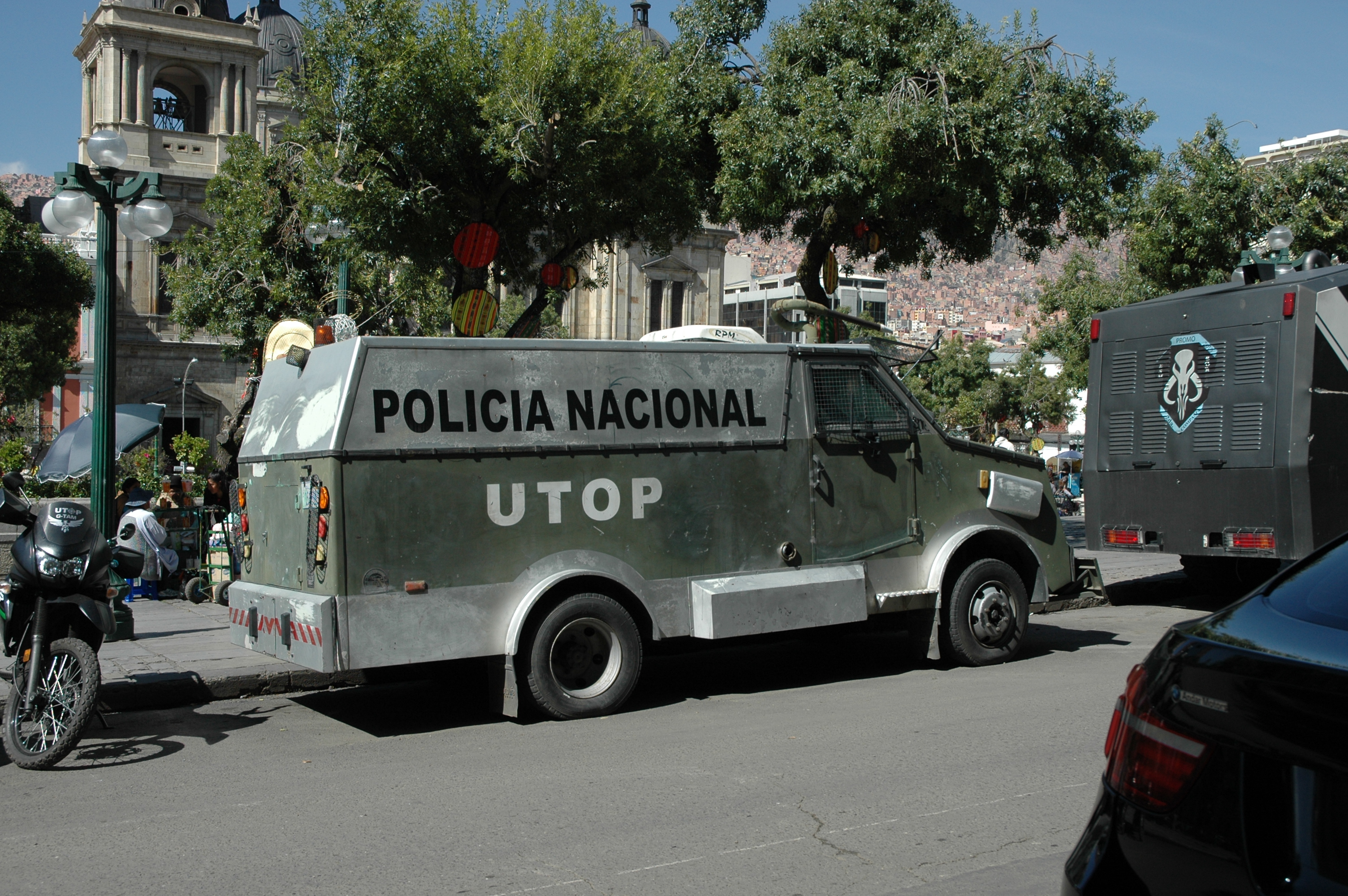 Next stop, the prison of San Pedro. This is the largest prison in La Paz and while we didn’t go in, we found out quite a lot. What Stef had to tell us about the prison was truly staggering. Rich inmates can actually pay for a separate room, and in some cases an entire suite of rooms. Some of the wealthiest inmates are drug barons who feel safer behind bars and are kept in luxury. Stef pointed out a little door in one of the side walls – this is where families ‘sneak’ in contraband for a bribe. Food, drink, drugs and luxury goods all flood in. At the other end of the scale, there is a whole community of children in the prison whose parents are both drug dealers. The children are kept with the fathers at San Pedro and the mothers housed in a separate prison. The children are allowed out during the day to attend school across the road. Despite this, many of the prison children get a far seedier education inside the jail and are drawn into a life of crime themselves.  Truly heartbreaking.

The mood was lightened by a trip to an Empanada shop. Empanadas are like pasties filled with meat and spices and although Dom and I couldn’t eat the glutenous pastry we did enjoy the filling! YUM! 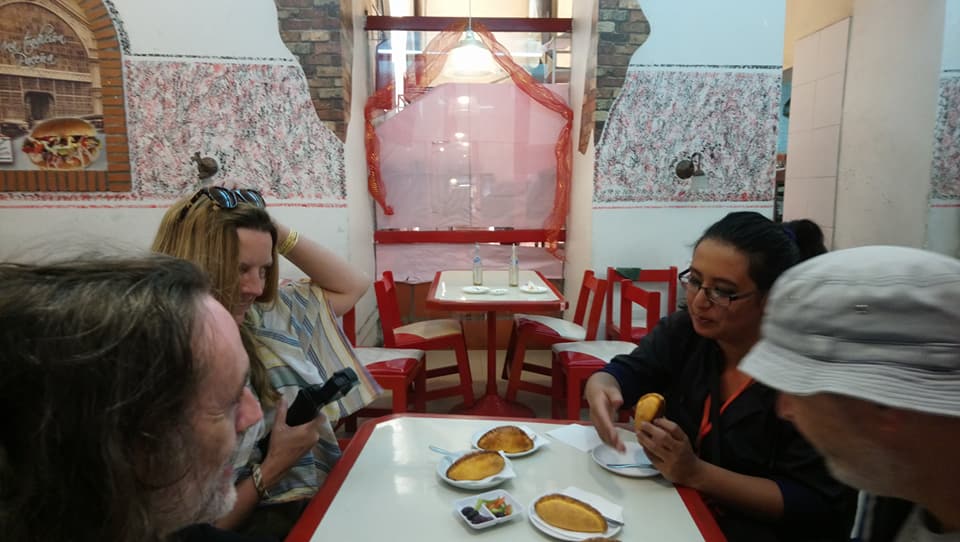 Our next stop was the Witches Market but first we had to brave a ride in a mini-bus taxi. We’ve seen some pretty scary driving over here but this was on another scale. Speed wasn’t the issue it was the constant honking, belching of exhausts and threat of other vehicles just ploughing into you that made this a less than relaxing experience.

Deposited into the middle of the Alto we followed Stef to the Witches Market. Wow! This is truly fascinating if a little eerie and alarming. Most of the stalls sold herbs and healing ointments. Many of them also sold ‘tables’.  These are the offerings that families make to Pachamama and consist of leaves, herbs and little sweet like tablets that are in the image of the things they wish for. Making offerings to Pachamama is done by the majority of the population, even those who still attend church. In fact Stef told us that many priests say the blessings for Father, Son, Holy Spirit and Pachamama. She is central to the way of life here. 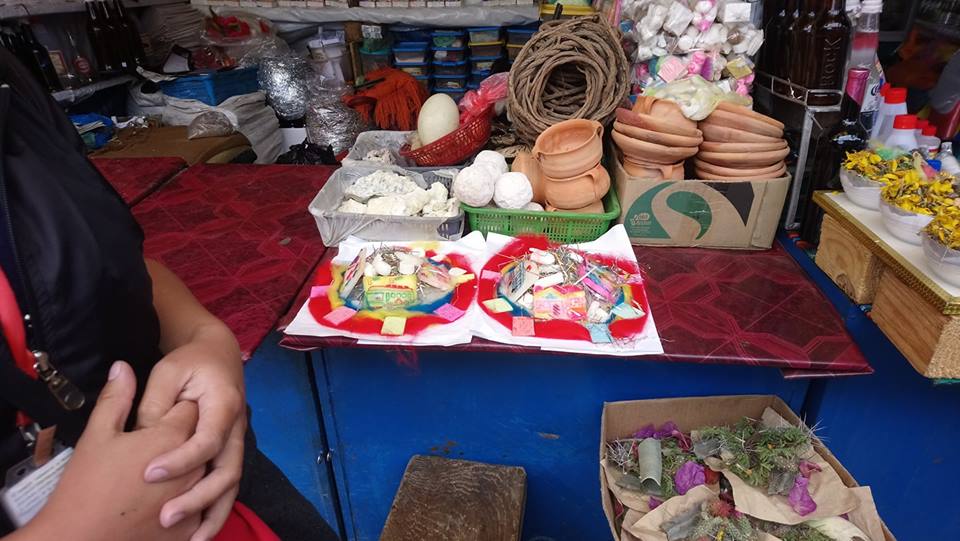 Despite Pachamama, around 60% of the population also use witches on a regular basis for healing. And most of it, like the old wise women of western culture, is based in herb knowledge and healing. However there is also an alarming amount of ‘dark magic’ in use. Black candles made with animal blood are used to create spells for love, revenge or other things. But the key message the witches spread if their powers are used for bad is that Karma will come again. We saw these black candles on sale and it did cause a shiver to pass down my spine.

Not feeling like casting spells on anyone we left the market and found ourselves outside the little cabins where the ‘real’ witches operate from. These are women and some men who have devoted their lives to finding ways to help others using their powers. While there, we saw a young child and family with a witch.  They were clearly in the middle of a ceremony and it appeared to be for the young child to regain health. Although Stef felt comfortable just walking past the family we all felt as if we were intruding and took a very wide berth. I don’t know what happened to the child but whether it was Pachamama, the witches or medicine I hope it worked. 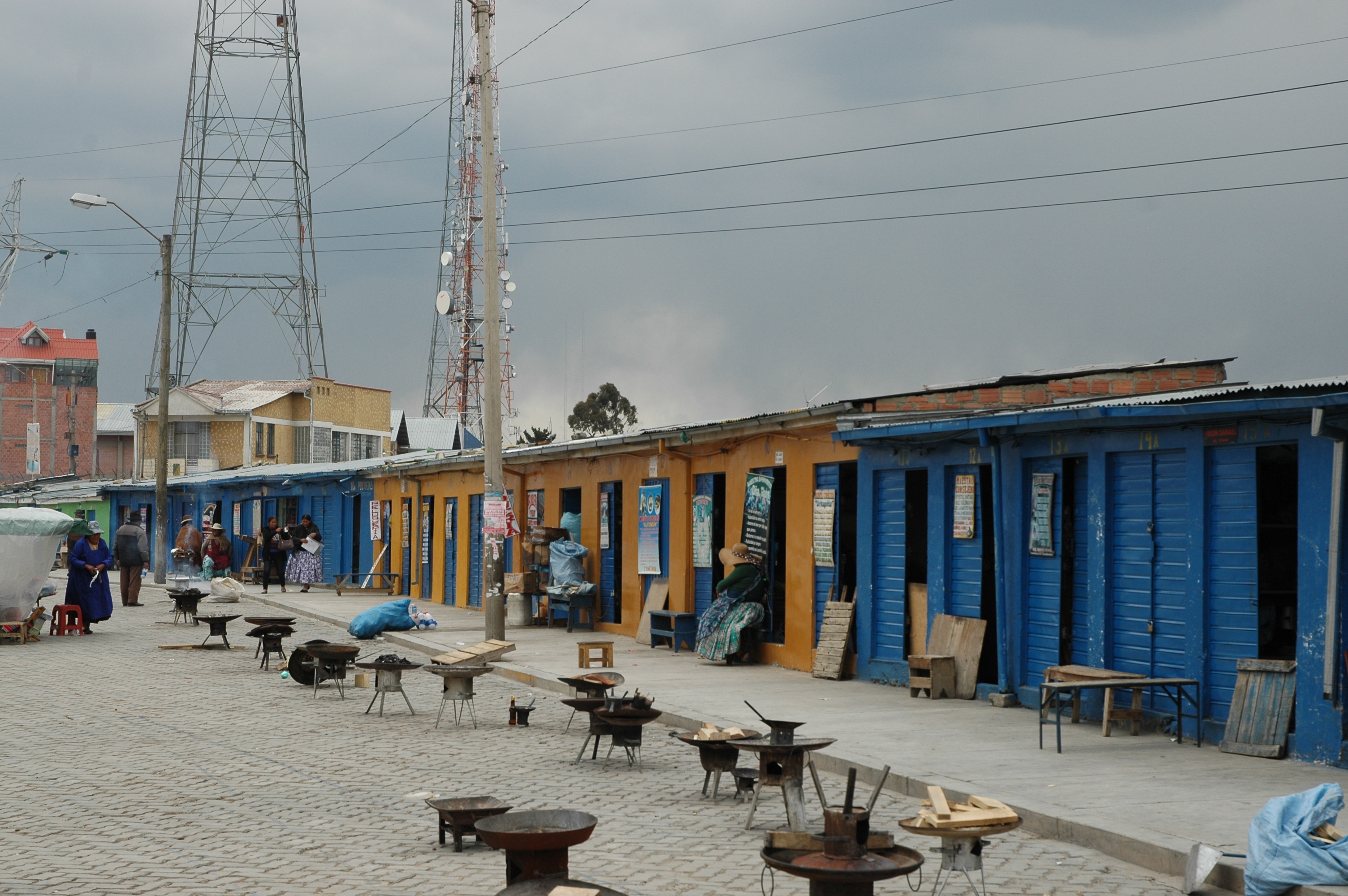 By now we were truly exhausted and Helen was becoming increasingly unwell. Thankfully the cable car ride awaited us next. The largest urban cable car system in the world it was designed and built by an Austrian firm to encourage locals to leave their cars at home and take to the sky instead. It’s a wonderful piece of engineering but despite being cheap to use many locals still take their cars instead.

This high up, the air is clear and as we swooped across the city like a condor  we started to enjoy La Paz in a way we hadn’t thought possible. The sprawling mass of buildings was still there but now they looked nicer, more welcoming, less industrial. La Paz was starting to grow on us. 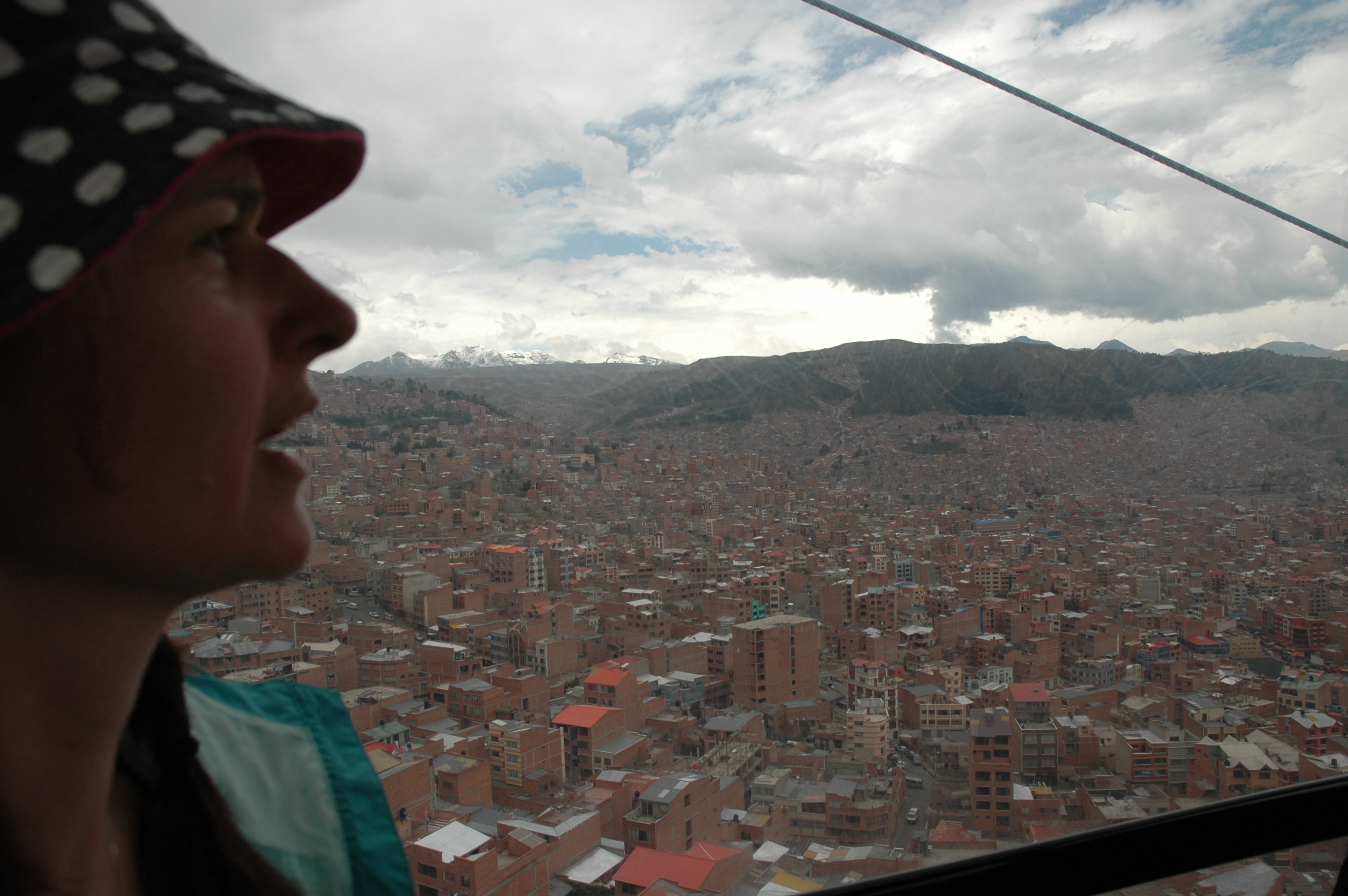 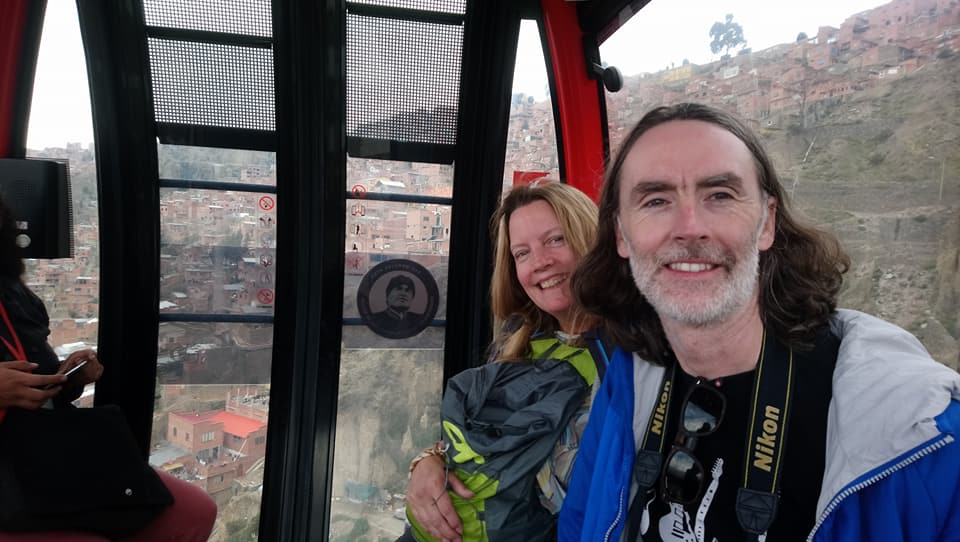 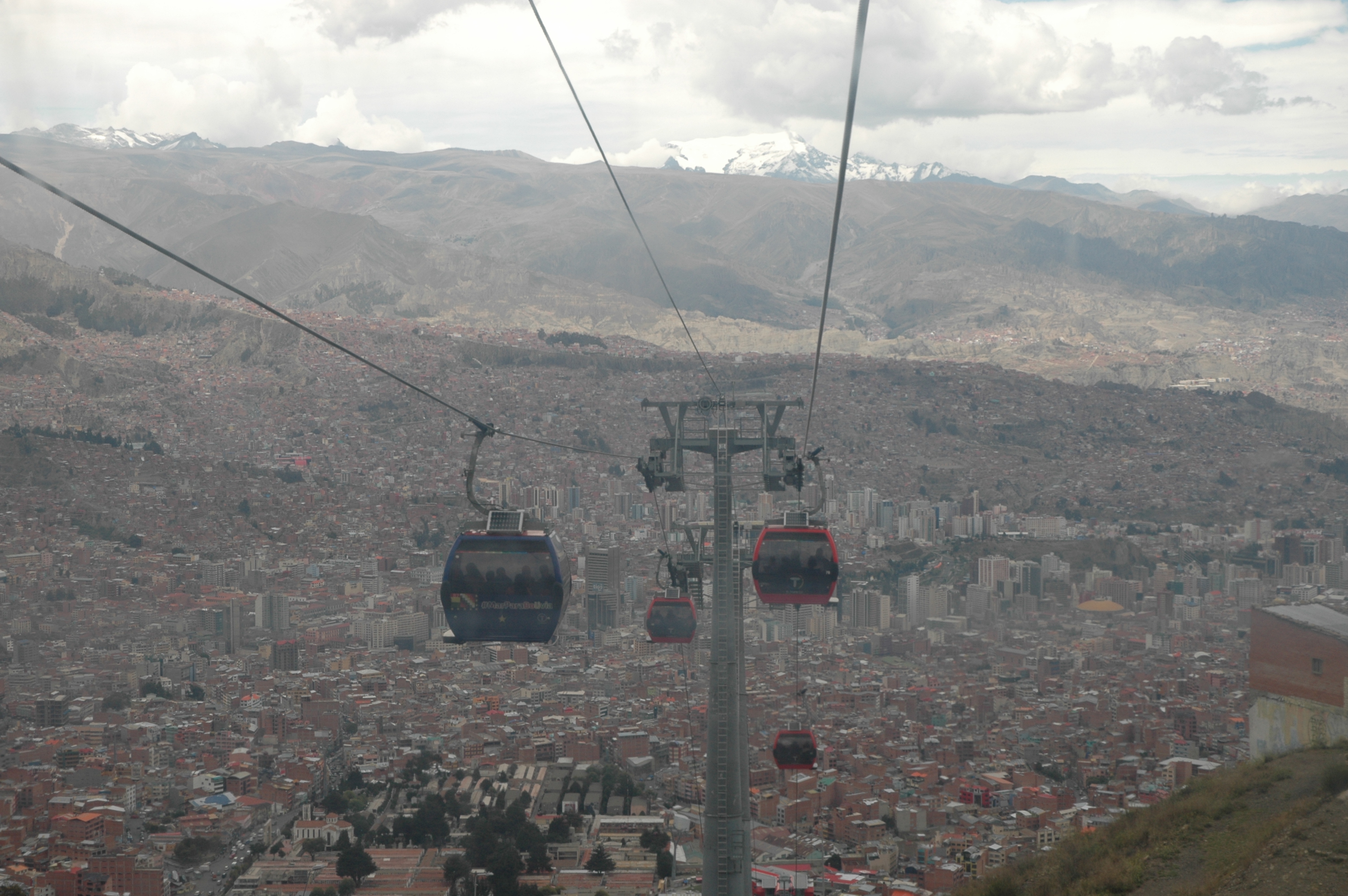