The city tour of La Paz had been fascinating and tomorrow more excitement awaited us at Tiwanaku. However, this evening we were looking forward to catching up with a friend of a friend who spends his time between Bolivia and England.  Danny had suggested we meet him in a wine bar called Hallwrights.

Danny lives in the uber cool and trendy quarter of the city. Wine bars, smart restaurants, cobbled side streets and more importantly clearer air aplenty. It all seemed a far cry from what we’d seen earlier that day. The wine was delicious and the restaurant Danny took us to was terrific. This was definitely a side to La Paz we could get used to. 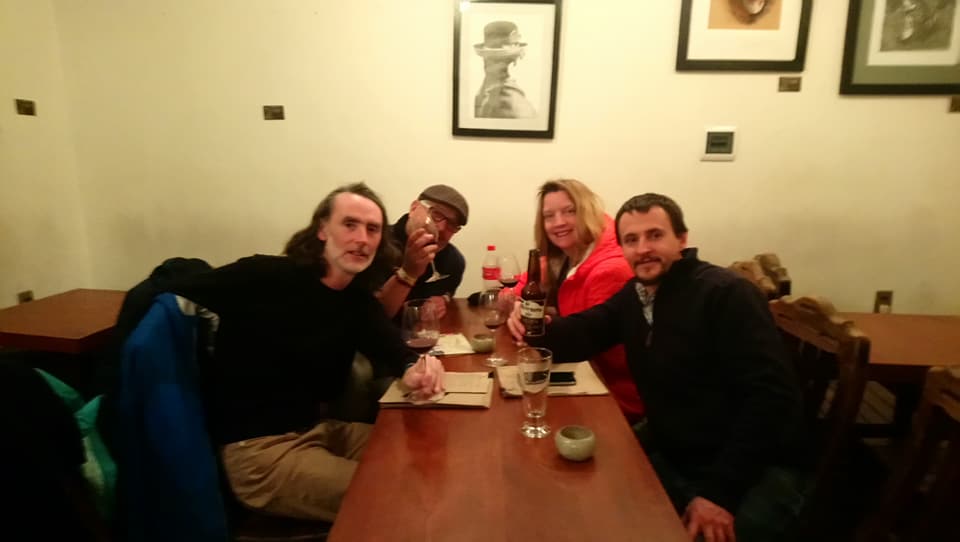 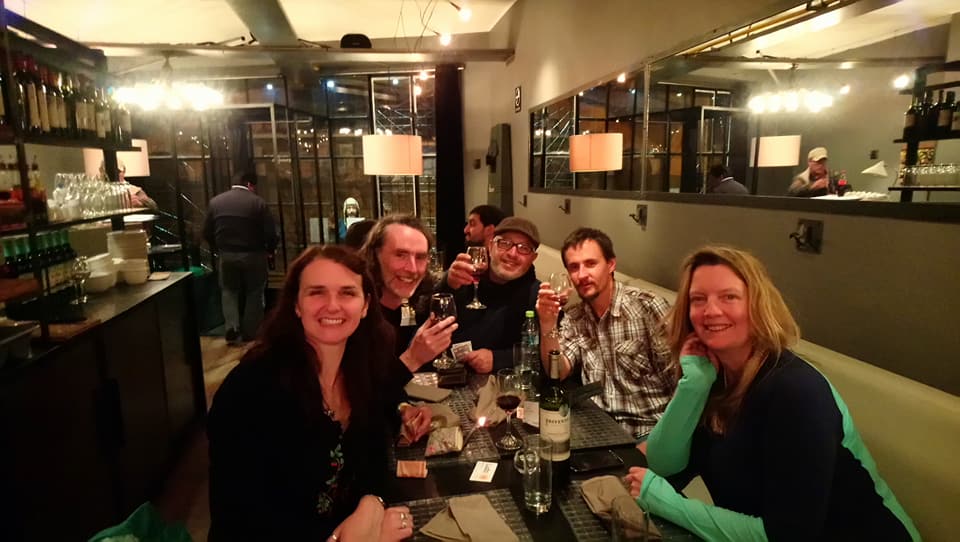 The following day dawned and our trip to the ancient city of Tiwanaku awaited us. A two hour journey (an hour of which was just getting out of the city) from La Paz, Tiwanaku is a place with many legends. Mention it to people and the first thing they often say is ‘aliens’. Was it constructed by aliens? Did aliens visit it? Were the people kidnapped by them? Our guide was going to fill us in.

In the museum we learnt that Tiwanaku was a pre-Inca civilisation and the people who lived here had quite different ways of life. To determine one class from another they elongated their ears and stuck pieces of bone through their lips. Today we have designer labels so I guess humans haven’t changed so very much. Another tradition which has changed included deforming their heads by tying pieces of wood either side of their skulls pretty much from birth. This caused their heads to elongate. The skulls on show at the museum do look very different to human skulls as we know them. Is this where our image of alien skulls has come from? 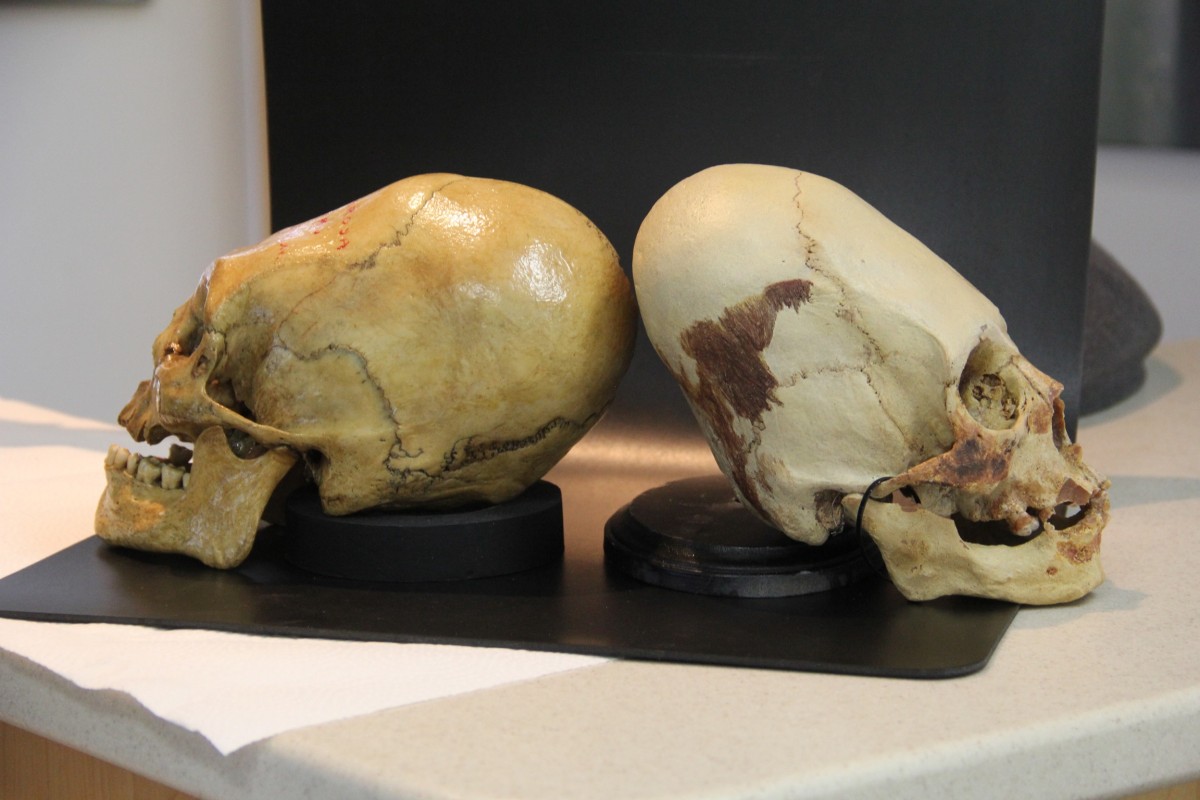 Unfortunately, this deformation caused intense pressure,  headaches and pain. The only way to relieve this was by drilling into the actual skull. Hallucinogeninc plants were used to numb the pain (or in fact make the patient so out of it, they didn’t care or notice what happened to them). It was also these hallucinogenics that were used to prepare the chosen victim for ritual sacrifice. I suppose the only comfort is they might not have felt too much.

Having climbed up a short path which left us inevitably out of breath we got our first glimpse of the site. The first thing that strikes you when you look down on the site is the amount of stones. They are quite incredible and all the original standing stones have been found and erected. They form a sort of retaining wall around the edge of what would  have been a main plaza. Like the Inca site of Machu Picchu numbers are important and every flight of stairs contained seven steps. In some places there are solitary statues with ornate carvings which indicate who they are a representation of. Like the Incas, the society seems to have been relatively equal as there were statues of both men and women. 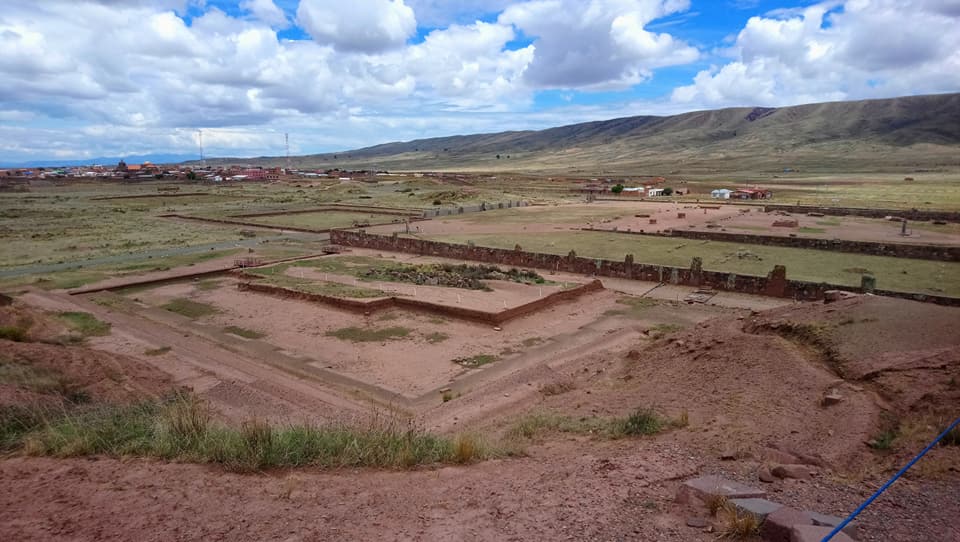 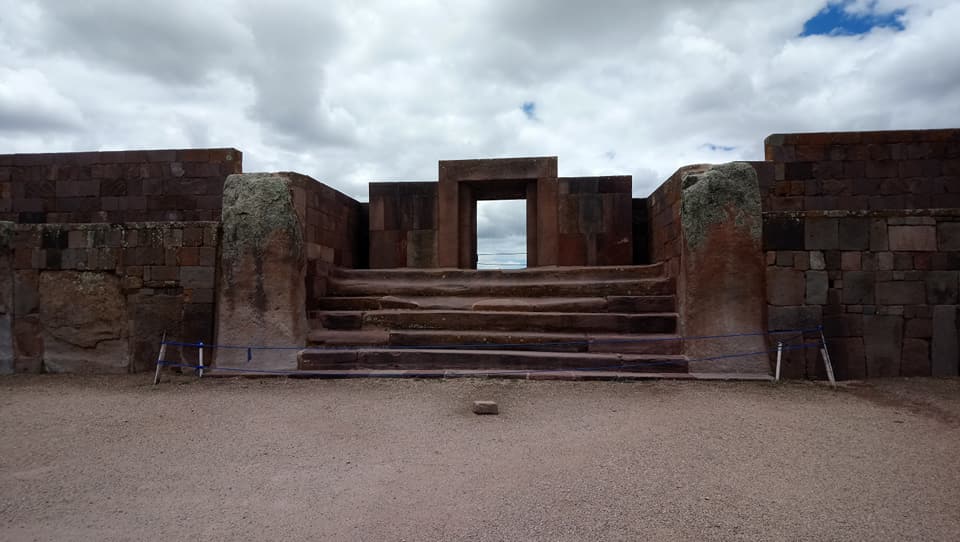 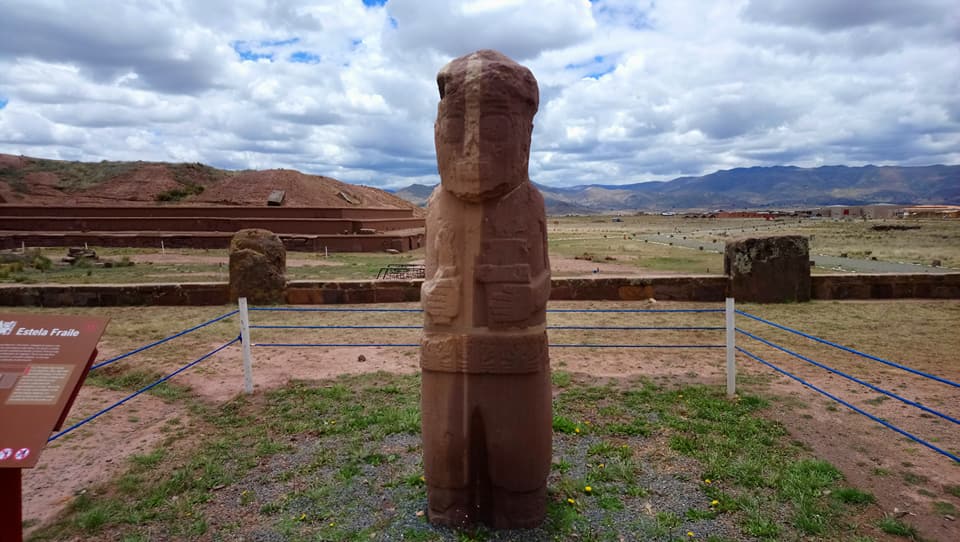 The Sun Gate was also re-discovered and although it looks as if it has stood in its current position for centuries there is much speculation about the placement of it and where it may have actually been originally. 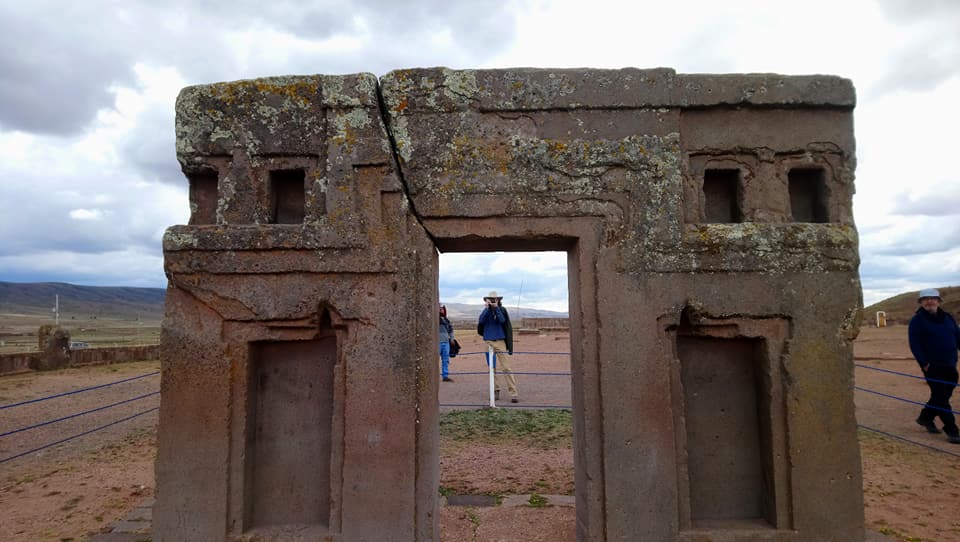 In one of the sunken temples which would have originally been partly filled with water featuring a raised platform for statues in the middle was a sort of sun monolith. A sun dial if you like, used to cast shadows on the wall depending on the time/season. All around the walls of this sunken temple were representations of human faces. Including the famous one that looks  like the archetypal alien head. We didn’t get a definitive answer from our guide about the ‘alien’ question. I guess it’s up to us to decide but the whole place was fascinating. Even more exciting, there are plans for this summer (2018) which will include further excavation. So far, they believe they have only uncovered a tiny percentage of what is actually to be seen. 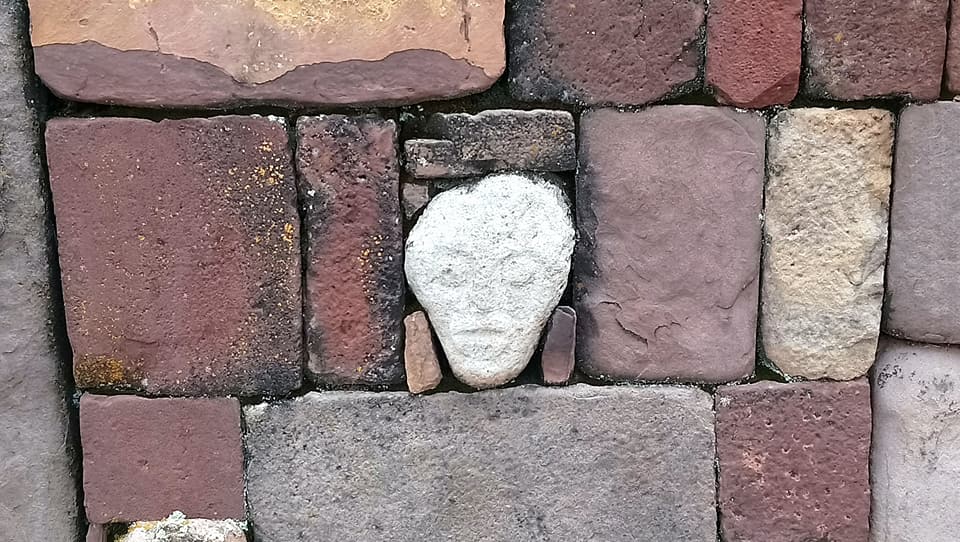 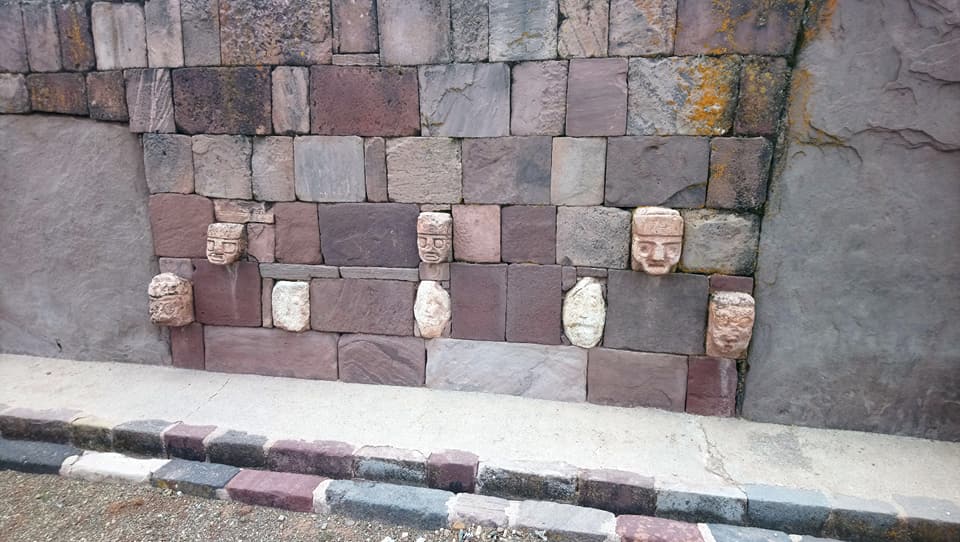 As for the end of this ancient civilisation? Evidence seems to suggest that the people destroyed the city themselves before leaving. The lake which would have provided food and water was gradually getting further away which may have prompted them to move. For once the Spanish Conquest can’t be blamed. Although, they did decide to use many of the stones to make the cathedral in the local church. A fine mix of beliefs under one roof – something that we should aim for these days too but without the human sacrifice!

For more information about Jude, her storytelling or her books please visit website