After the glory of Machu Picchu we had a bit of a chilled out day. As the town Aguas Calientes is named after hot springs in the river we decided to spend a bit of time enjoying them.

The weather is so changeable in the Andes and by the time we’d crossed a bridge the sun was out and scorching. Total contrast to this time yesterday when the cloud was like fog.

The Hot Springs were no doubt rustic and natural at one time but now there is a purpose built complex comprising four tiled pools of varying temperatures, changing facilities and a rather mystical bar with lots of Inka art. Although the water looks undeniably murky it felt good to sink back and relax. And what a view to accompany it. 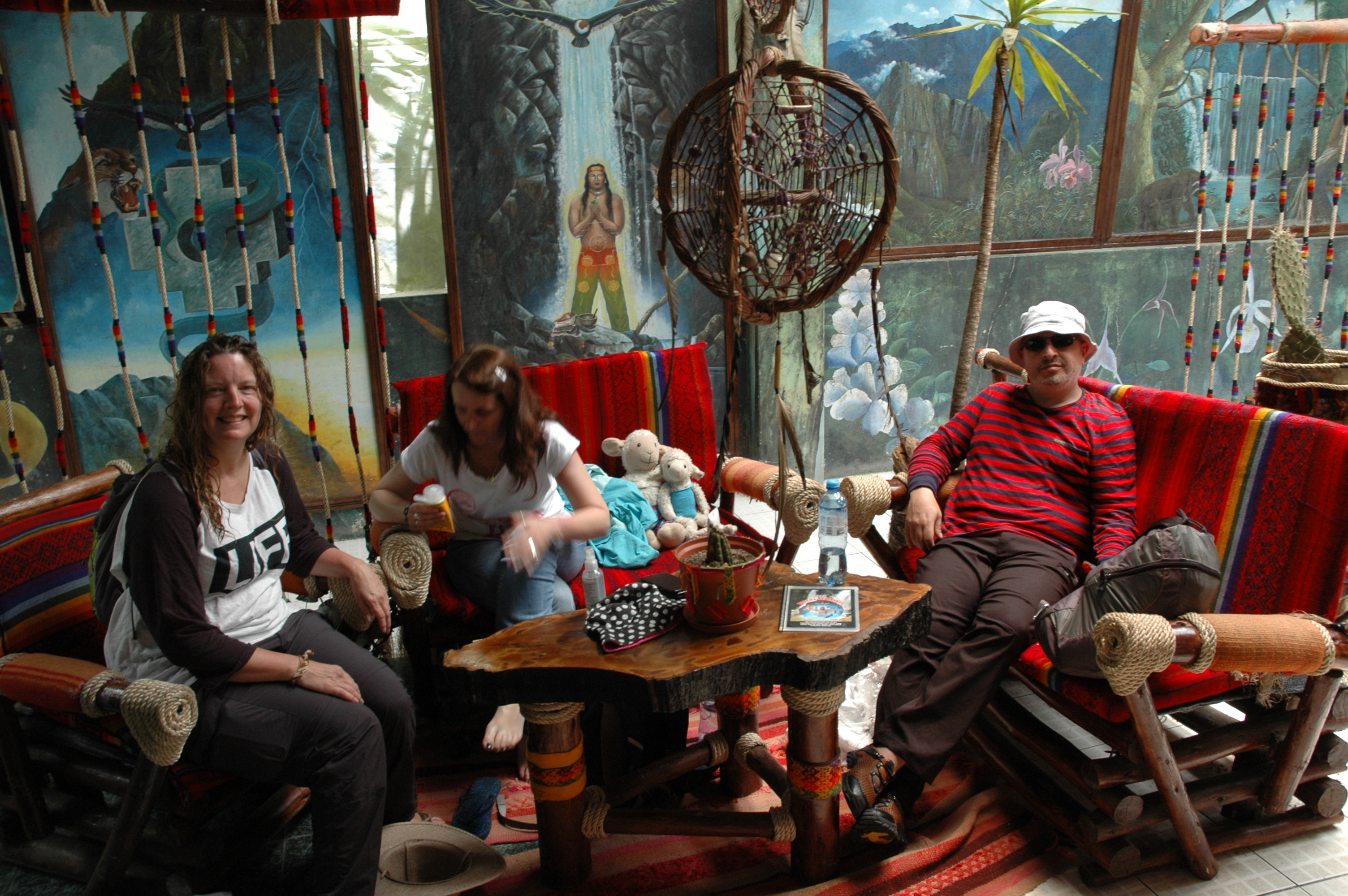 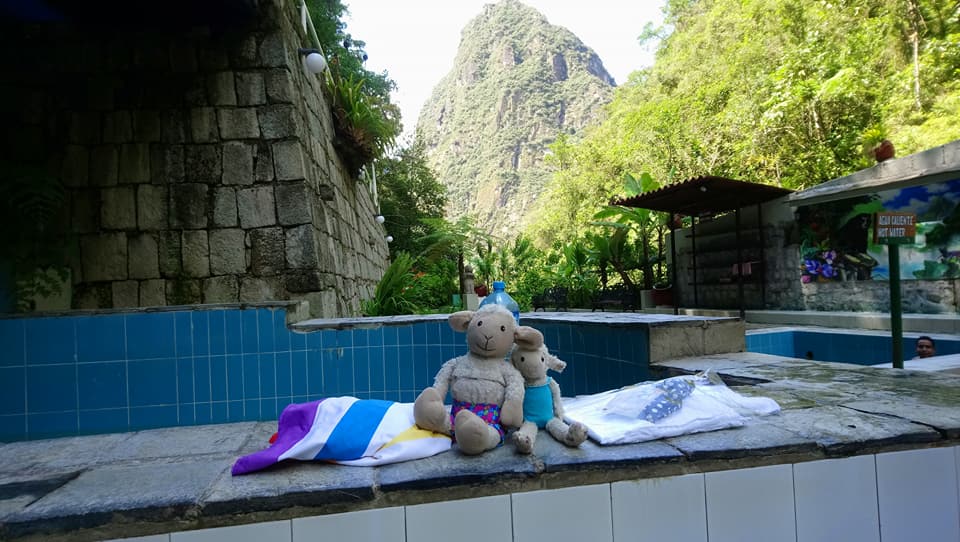 Having become suitably prune like we chilled in the bar for a bit before returning to the hotel to pack. Before we knew it we were back at the train station for our return journey. This is much quicker than the one coming so I would recommend that if you go to Machu Picchu go in from Ollantaytambo as you’ll get the journey in slow but glorious technicolour.

The minibus journey back to Cusco was er fun! Helen and I were in the front next to the driver whereas poor Dom and Kass were right at the back with a group of rather stinky, sweaty twenty somethings who had just completed the Inka Trail.  “We’re so sorry for you sharing the bus with us…we stink!” was their opening line. They weren’t wrong.

Yet again, we were treated to the Peruvian driving and once again it was terrifying. I will never get used to overtaking up hill on a blind bend without even changing up a gear. The manoeuvre seemed to go on forever with the bend getting ever closer. It was like watching a scary movie, you can’t bear to watch but you just have to see! With relief we climbed out and settled back in at Millhouse Hostel.

No time for chilling here though as we were up early the next morning to catch a coach to Puno. The trip would take all day and we’d cross the Altiplano. The Altiplano spans the widest part of Peru and is the most extensive area of high plateau on Earth outside Tibet. Our guide for the day was Alfredo. Inevitably the introductory talk explained the rules for the toilet facilities. “Only pee pee, no poo poo!” Yeah I think we’ve got that one sussed now.

I’m not going to lie, the thought of being on a coach all day for hour upon hour had not really thrilled me. Armed with my travel bands to ward off sickness I was preparing myself for the worst. However,  the day was broken up into various stops at various points of interest. Plus, much of the journey was flat and straight as the road cut a path across the plateau. Before the vast expanse though we had our first couple of stops.

The first of these was the unbelievably ornate church of St Peter and St Paul at Andahuaylillou. Although not long into the journey, this little village seems a million miles away from the hustle and bustle of Cusco. The church is possibly the most ornate I’ve ever seen. Gold dripped from every surface, altar decoration and wall hanging. Not really my thing – way too much bling! But certainly very striking. Yet again the Conquistadors had moved in and imposed their beliefs. Well tried to. According to Alfredo, when the Spanish arrived they gave Bibles to the Inka who promptly used them as pillows! The beautiful frieze work around the church also depicts how much of the Inka way of life was incorporated into the new religion. Today although 80% of Peru’s population claim to be Catholic, in reality only less than 20% are practising. We weren’t allowed to take photographs inside the church but the contrast to the modest exterior was quite something. 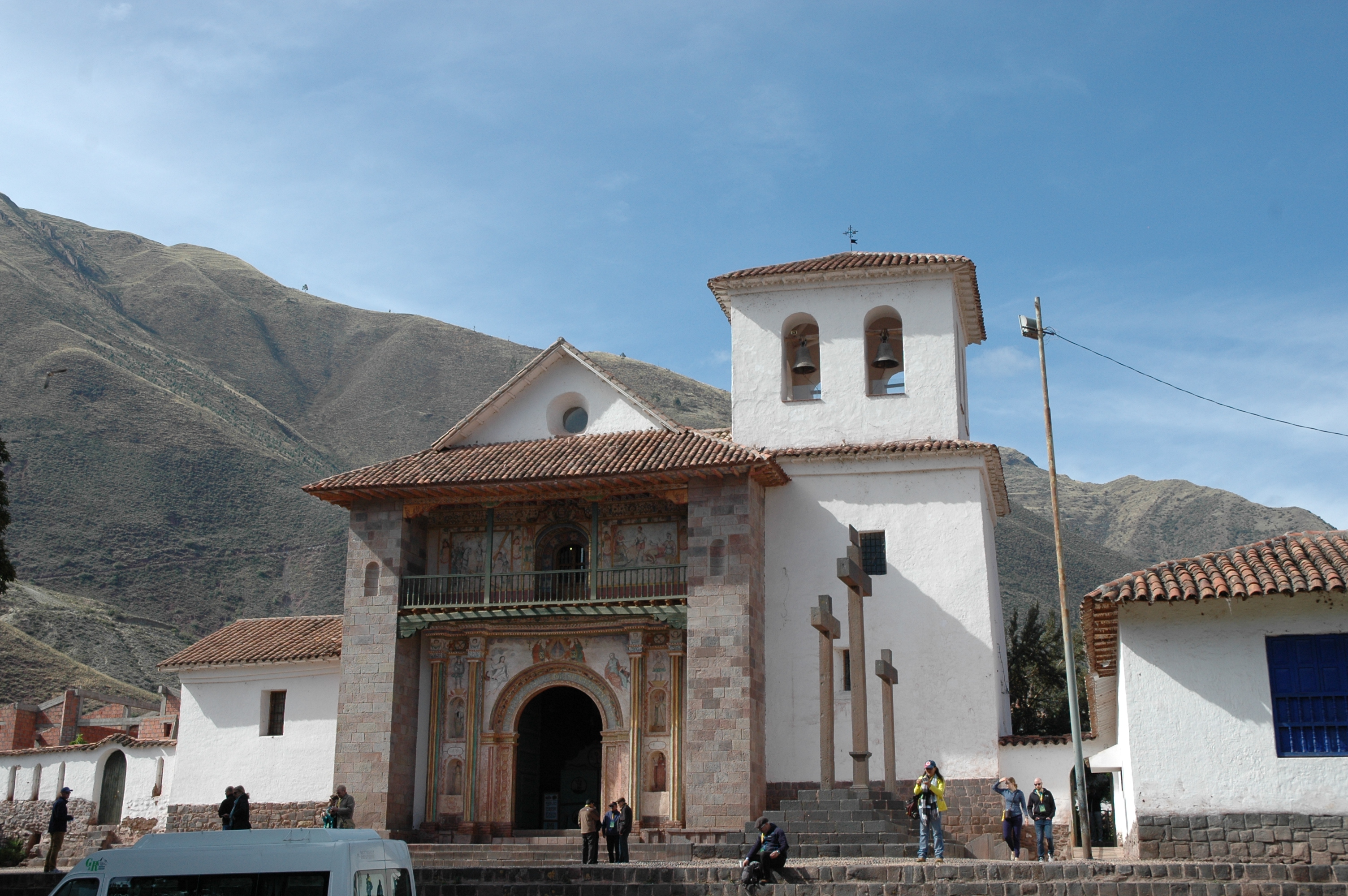 From here, we visited Raqui (pronounced Ratch-she) another historic Inka site which was built to honour Viracocha (the great creator deity).  This is a tiny village now but back then more than 100,000 people lived there. These numbers swelled dramatically when visiting royalty, pilgrims and travellers passed through. The young, beautiful and, of course, chaste royal ladies were housed in absolute splendour here. However, don’t get too excited as they were housed in splendour before being used for sacrificial purposes.  The ritual sacrifice may only have been practice for the last few decades of the empire but that’s a few decades too many for me. 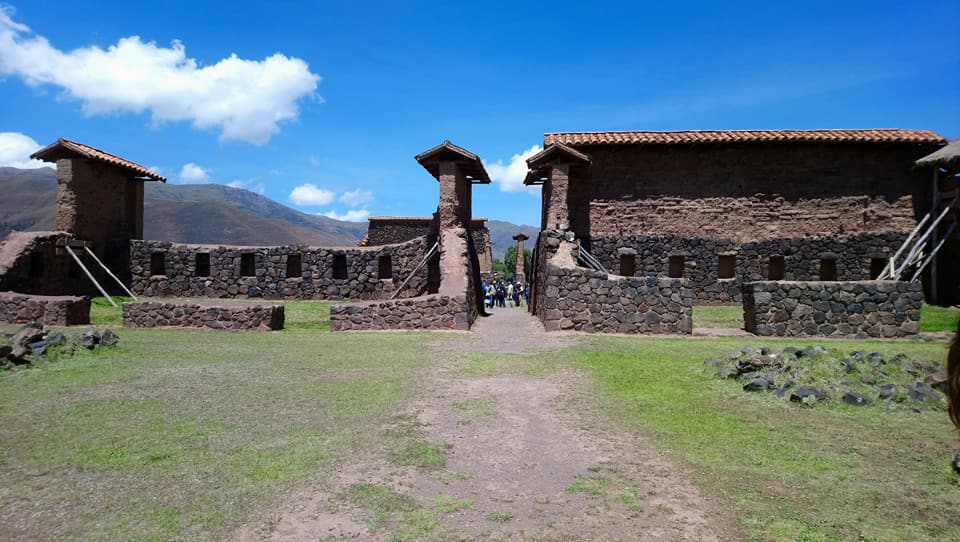 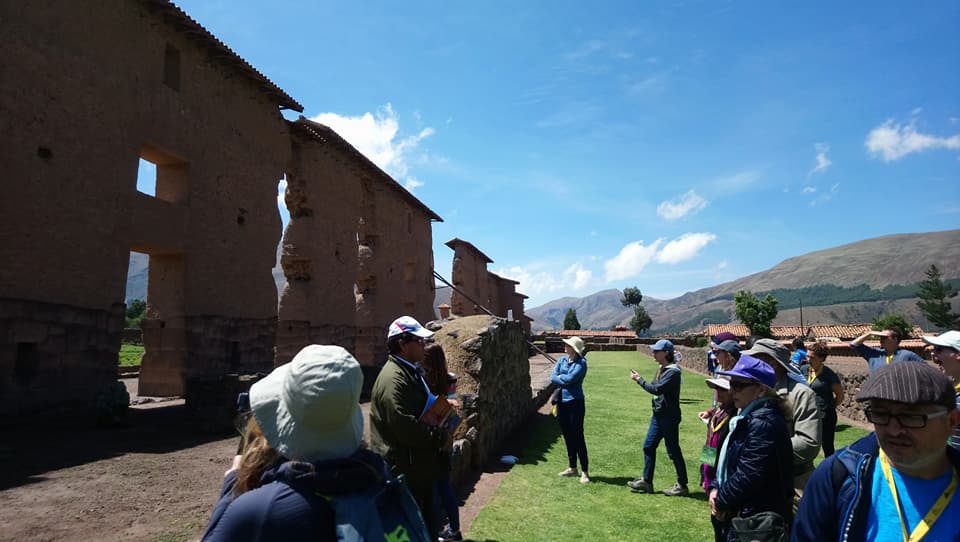 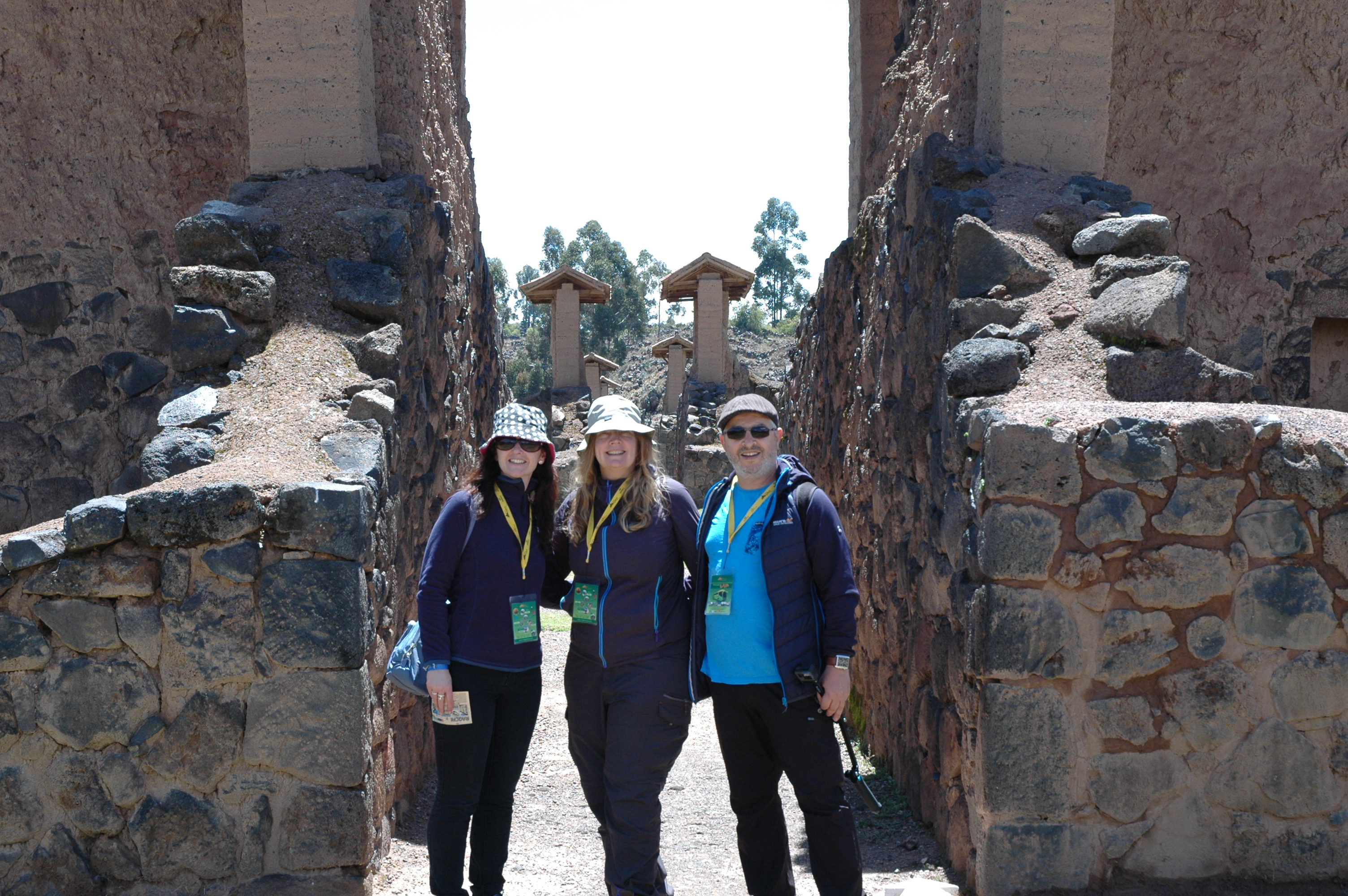 And how do you follow a talk about human sacrifice? With lunch of course! This was really tasty and we sat in the shade enjoying the view of the dam. Very peaceful well apart from yet another band playing panpipes. It’s always The Sound of Silence….oh the irony! 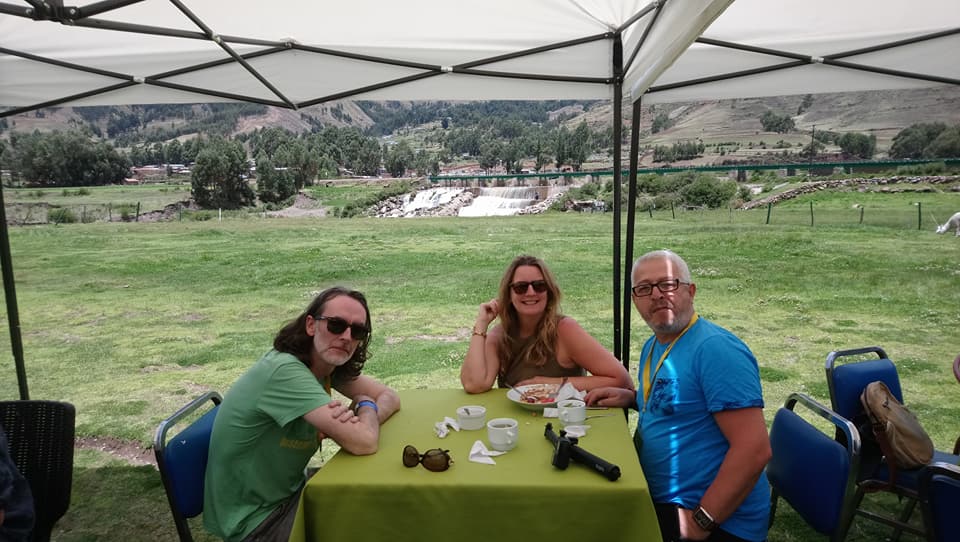 From here it was onwards and literally upwards to the highest point on the Altiplano between Cusco and Puno. On the way we passed flamingos, alpaca and llama aplenty. It’s a vast landscape. Snow capped mountains, desert like terrain, rivers in varying  states of flow all compete for attention. We stopped briefly at the highest point. At over 4,200 metres above sea level the air was definitely having a hard time finding its way into the lungs. We all felt a bit swoopy so following a quick photo shoot we were off. 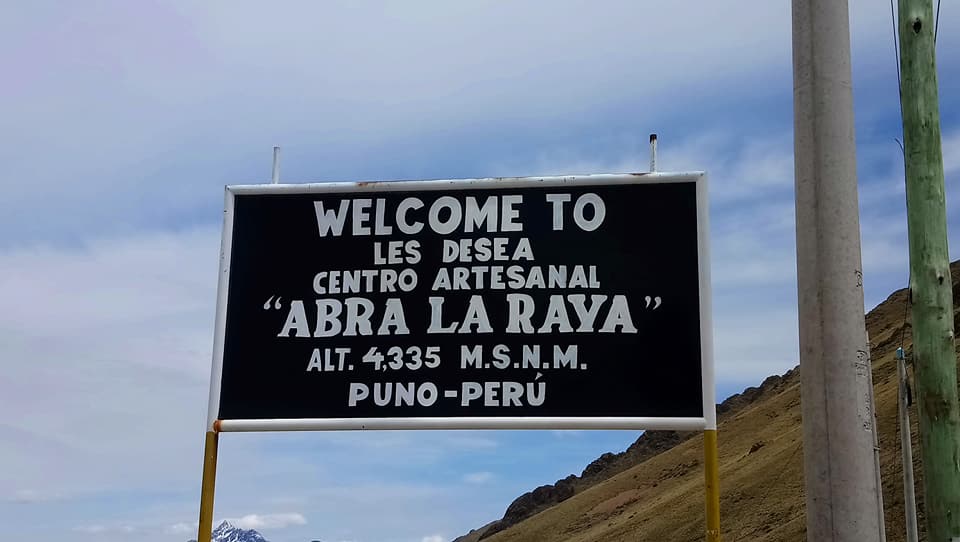 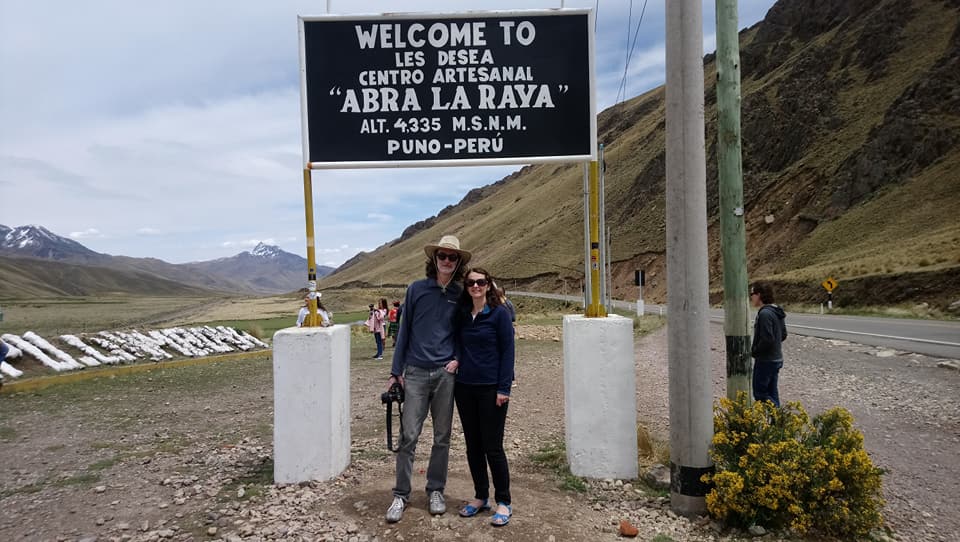 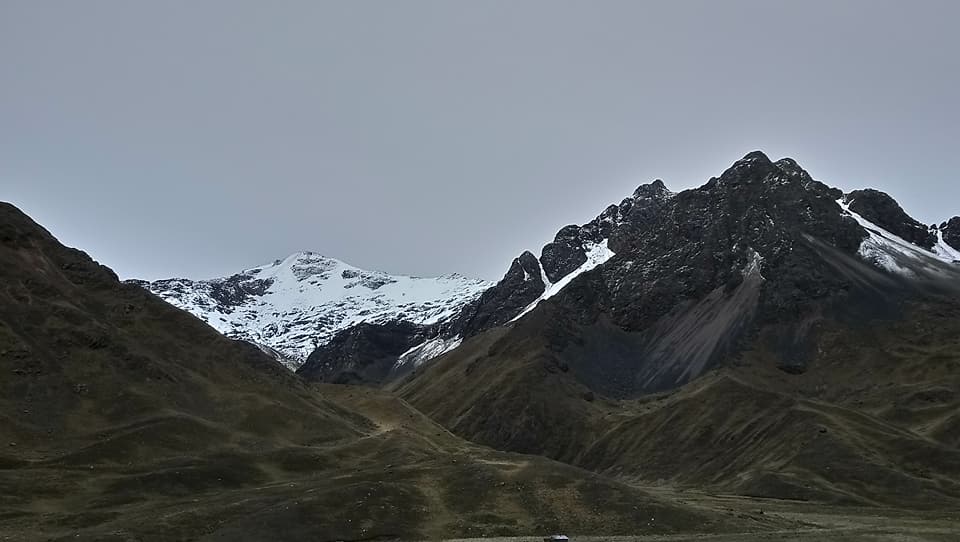 Back on board, we set off for our final visiting spot. I’m not going to lie, coach fatigue was setting in. I could barely muster the enthusiasm to get off the bus. The town looked as if it definitely needed an injection of visitors but unfortunately for them we were at the wrong end of our journey.

The rest of the journey to Puno contained more vast landscape and more llama and alpaca. And then we found ourselves on the outskirts of Juliaca a large and rather unlovely industrial town. Such a contrast to the villages we’d been to earlier in the day. With relief we passed on through and eventually the shores of Lake Titicaca (I’m spelling it the Peruvian way) came into sight. Tomorrow, we’d be out on the lake itself and I couldn’t wait! 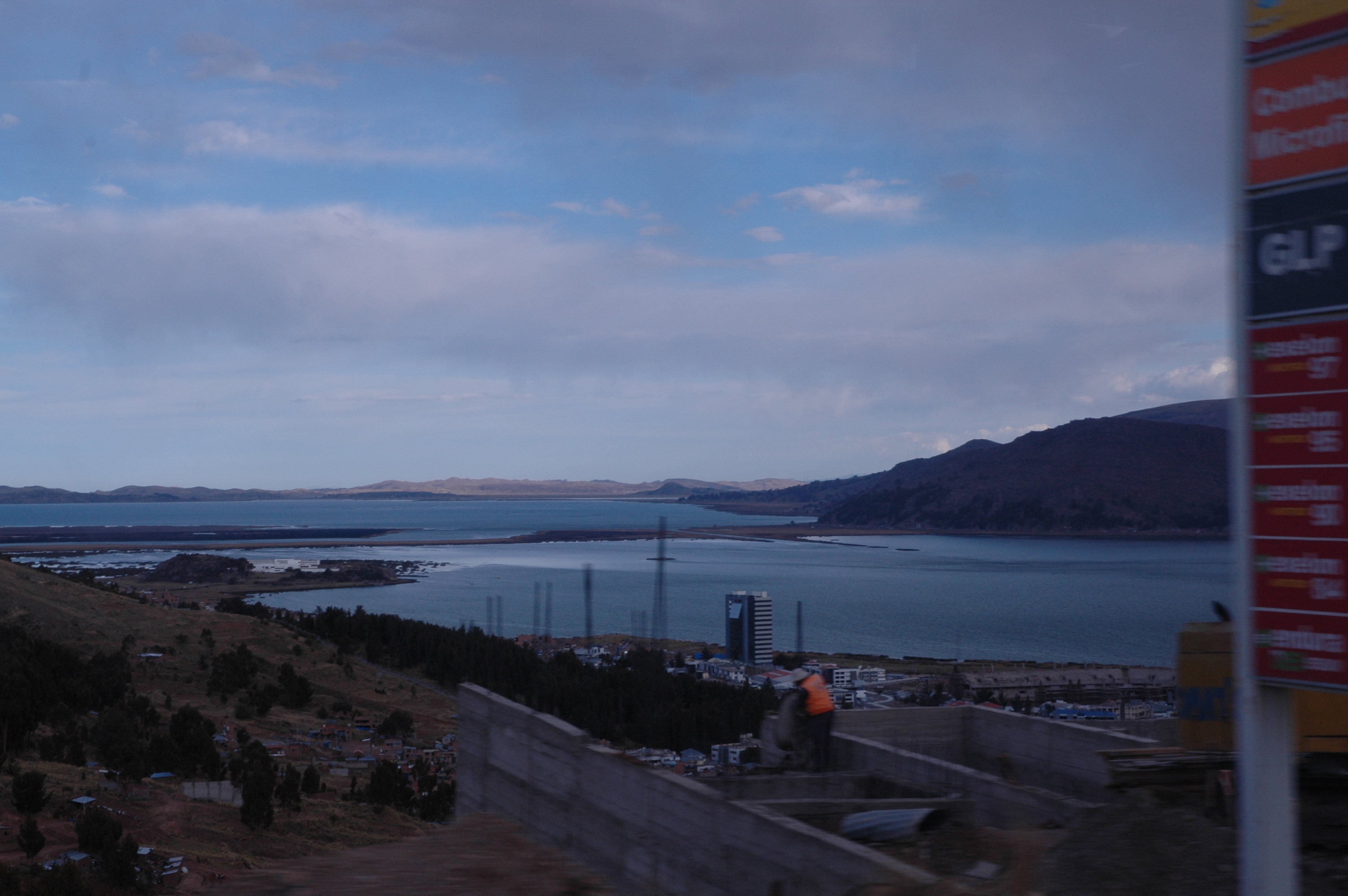