Our overnight stop in Lake Titicaca town of Puno was enlivened by the most torrential rain I’ve seen in a long time. Dom and I donned our waterproofs and set off bravely through the streets which looked more like rivers! We really hoped Pachamama would hear our plea for better weather tomorrow. And it would appear she did. The next day dawned clear and sunny and we were met by Javier, our guide for the next day or so. Lake Titicaca awaited us and we were all looking forward to time spent on the highest lake in the world.
Setting off from the harbour we travelled through shallow waters for about forty minutes to the floating islands of Uros. Until 1985 this community had lived on house boats which they simply moved around the lake at will. This ability to move around freely meant they were largely safe from the Spanish Conquistadors. So what made them turn to island life? Modern life itself. Many of the Uros have jobs on the mainland and they found it far easier to make a more permanent base for themselves near the shores of Puno. 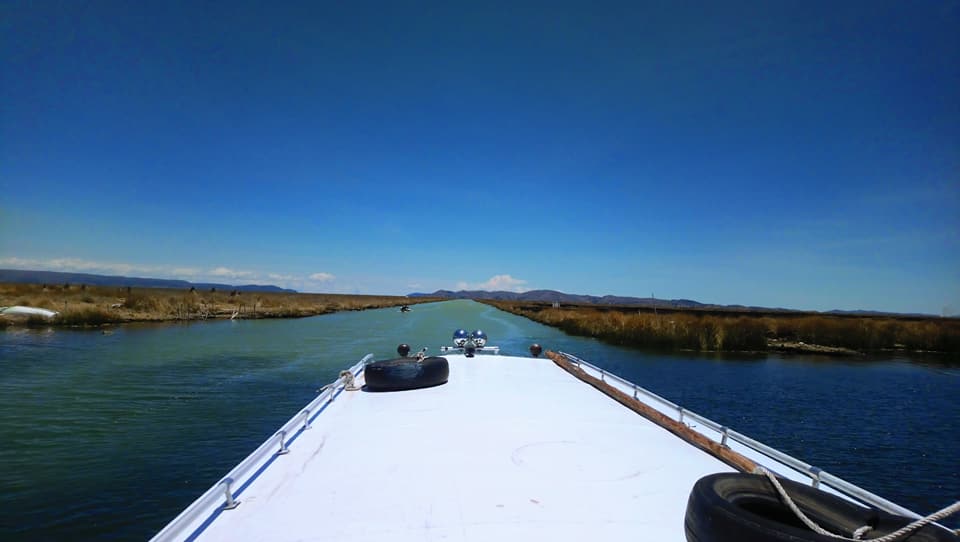 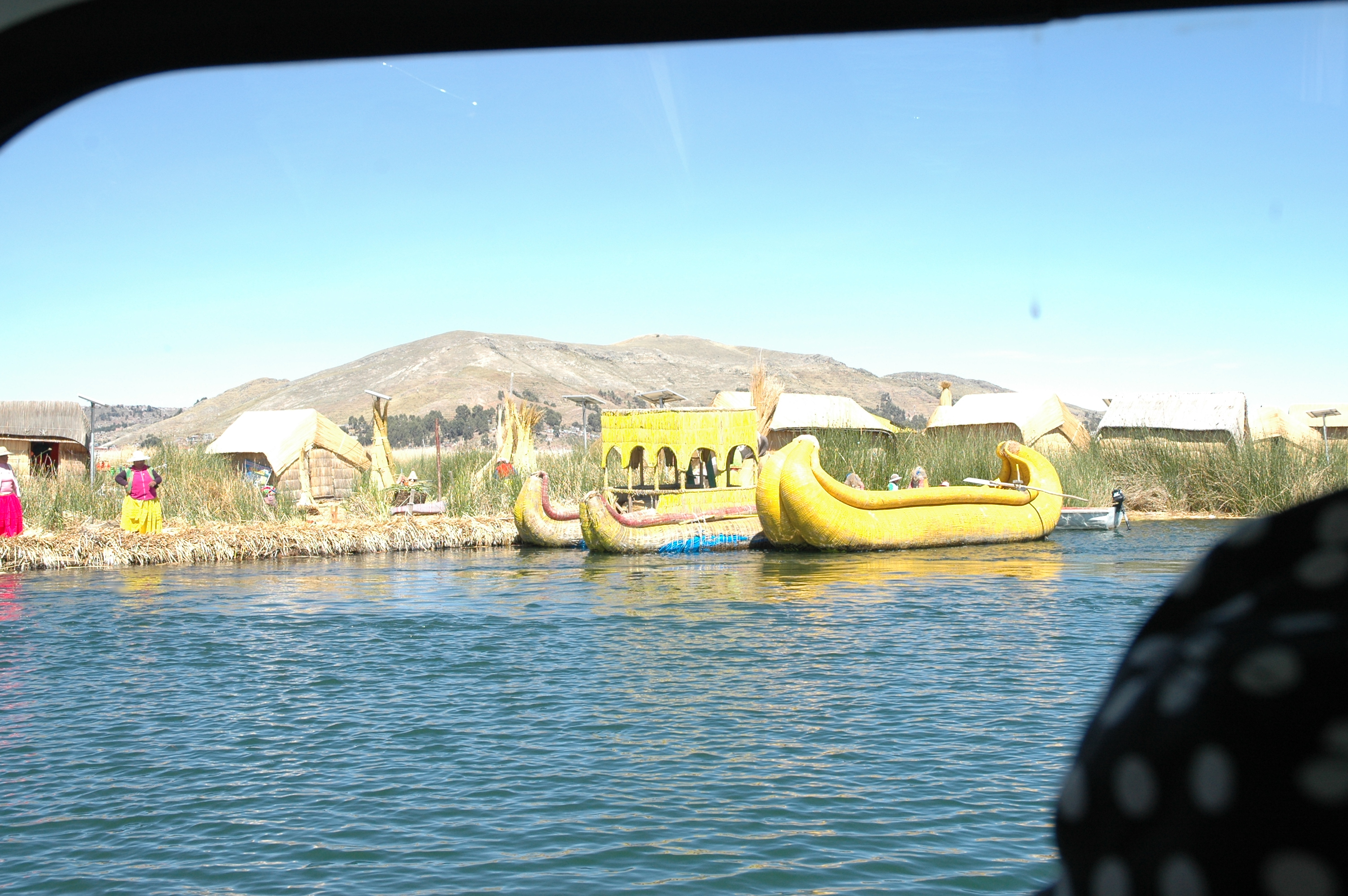 The islands have a president who is elected yearly. The families across the islands choose who the president will be and selection is on a rota. The leader this year is a lady called Marie Luise who was dressed in a gloriously coloured traditional outfit. She welcomed us warmly (via our guide Javier who also translated from her indigenous language of Aymara) and told us how the islands were actually made. Using the tortora reeds which grow abundantly near the shores of the lake, these are clamped together in blocks which when strung together and anchored down, form the stable and fully floating bases for the 42 islands in the community. 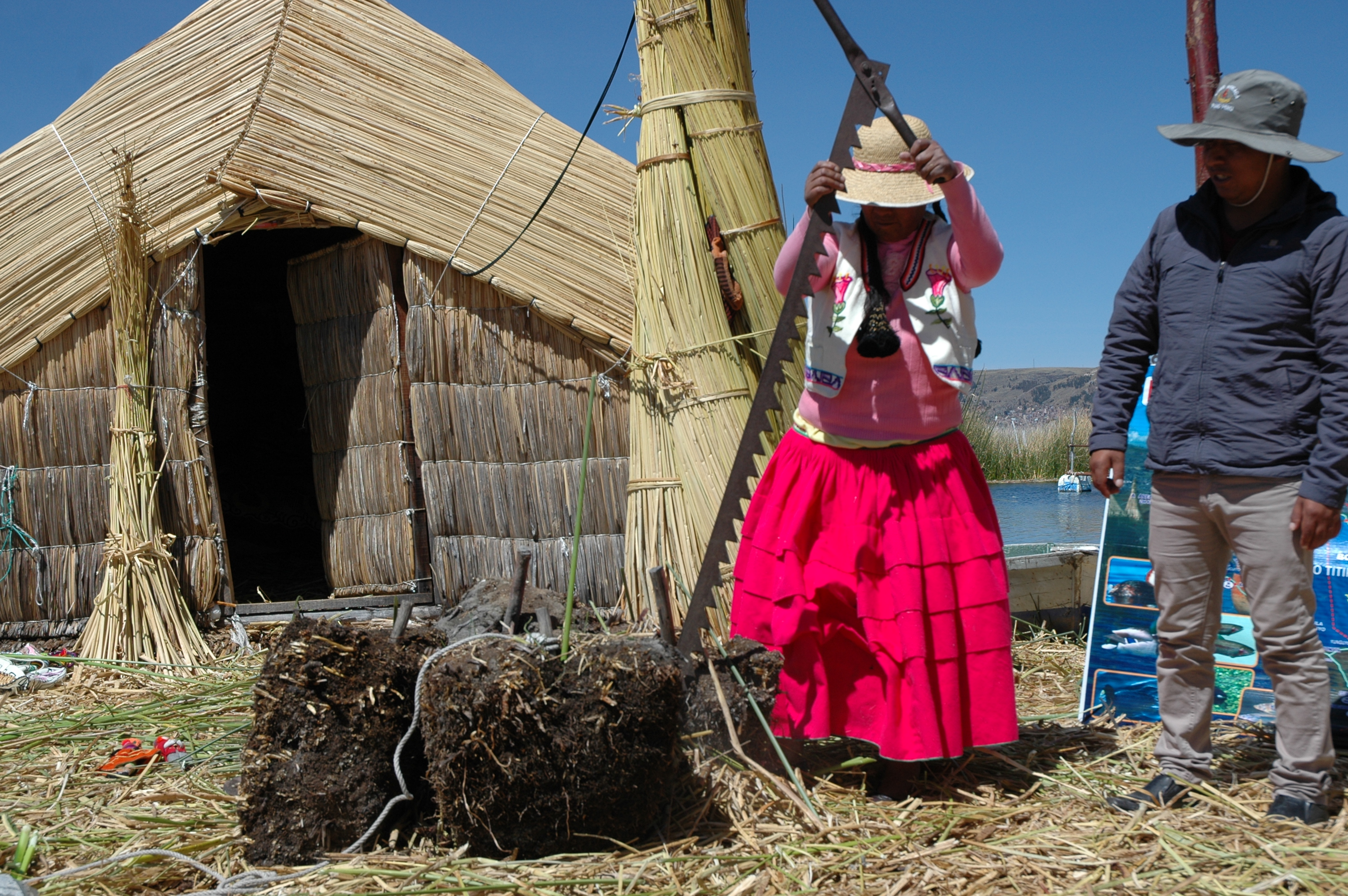 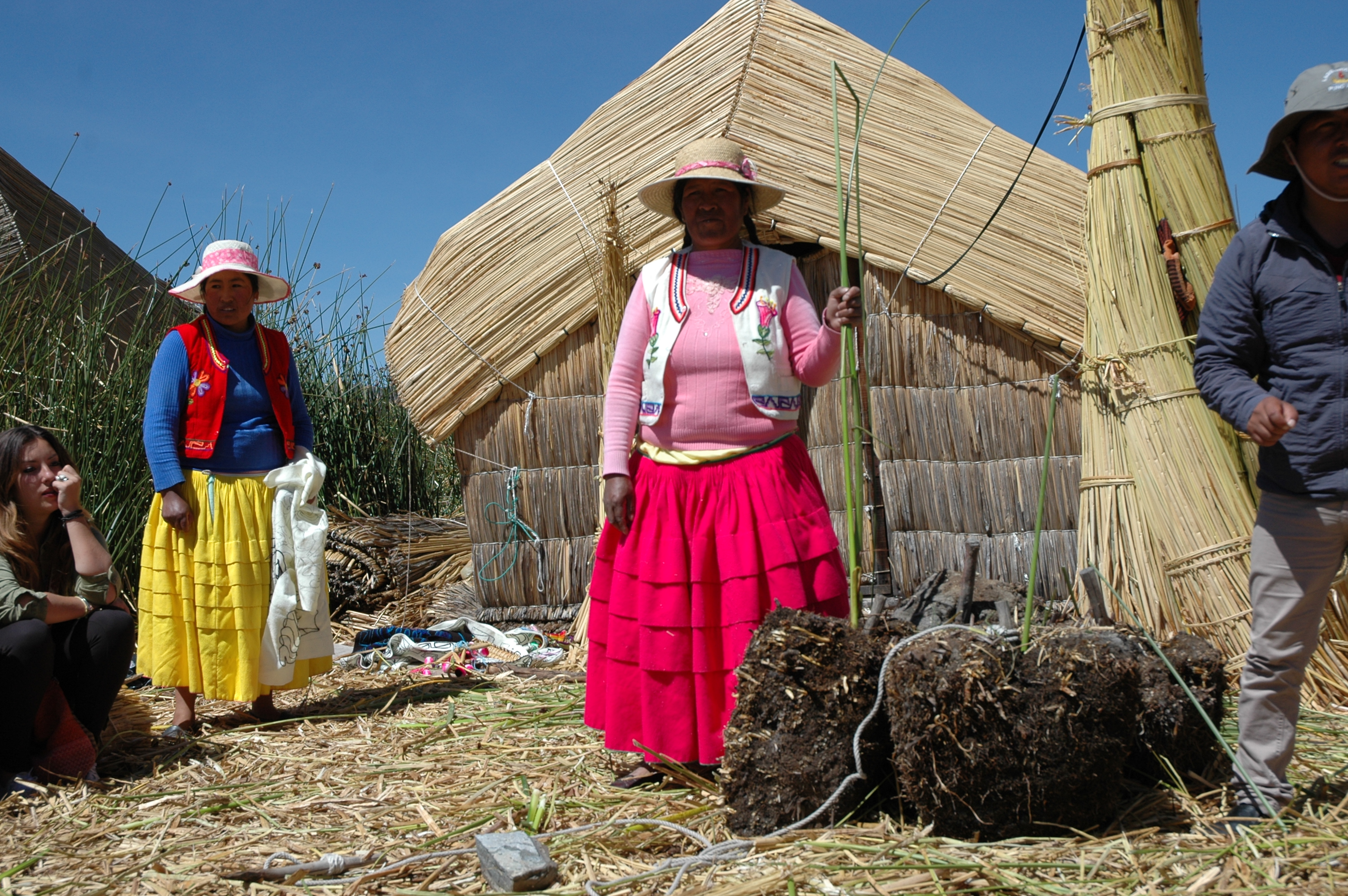 The ladies of the islands welcomed us into their homes which are beautifully made and all unique. Most families have at least 2 or 3 children and adults living in a house slightly smaller than an average garage. Cooking is done outside (a hazardous occupation on a flammable island!) and the houses are generally used for shelter and sleeping purposes only.

Getting an insight into their lives was really fascinating. It was a great experience but the only thing to spoil it was the big sell we were then treated to. By now we were wise to the ‘Genuine Alpaca’ selling points and the fact that most of the ‘handmade’ goods are actually imported from China. Personally I’d rather the tour companies charged tourists more and gave the extra to the families for showing us around rather than dealing with the selling techniques. And we weren’t the only tourists for feel this way. 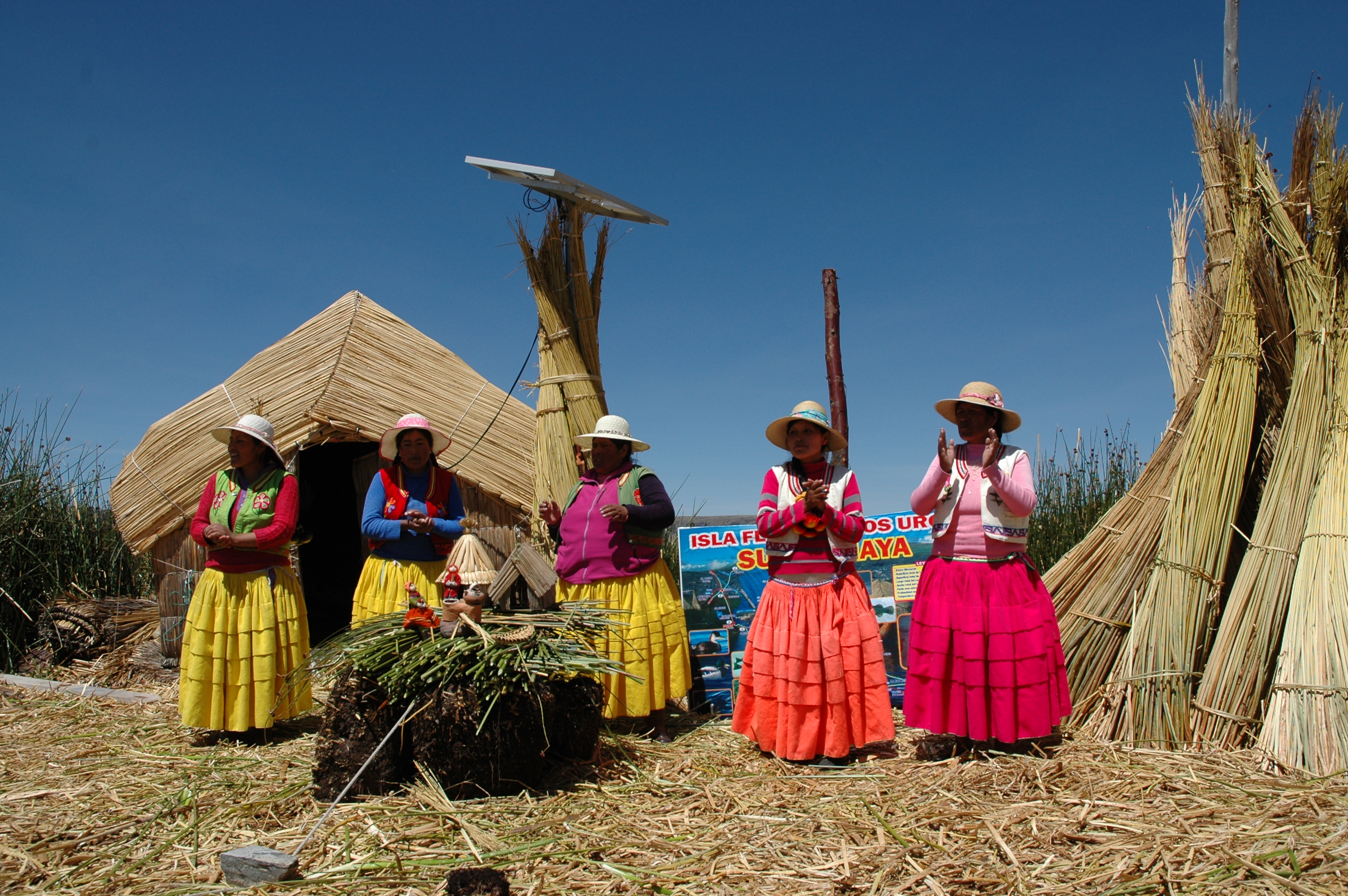 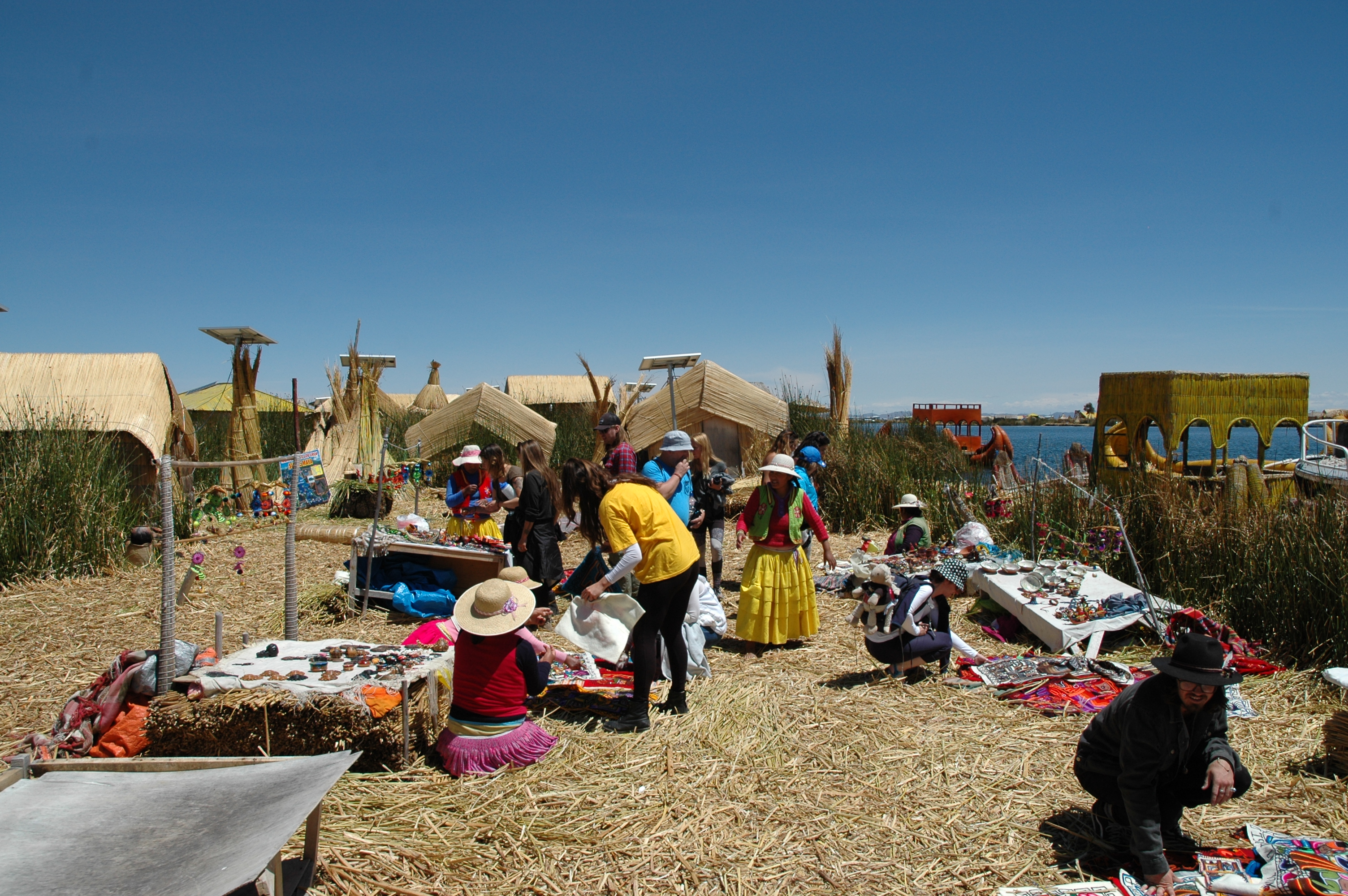 Leaving the floating islands behind we continued out on the lake. It is huge! An enormous expanse of water that changes colour depending on the depth of the lake, it really is hard to remember it is a lake and not an ocean. 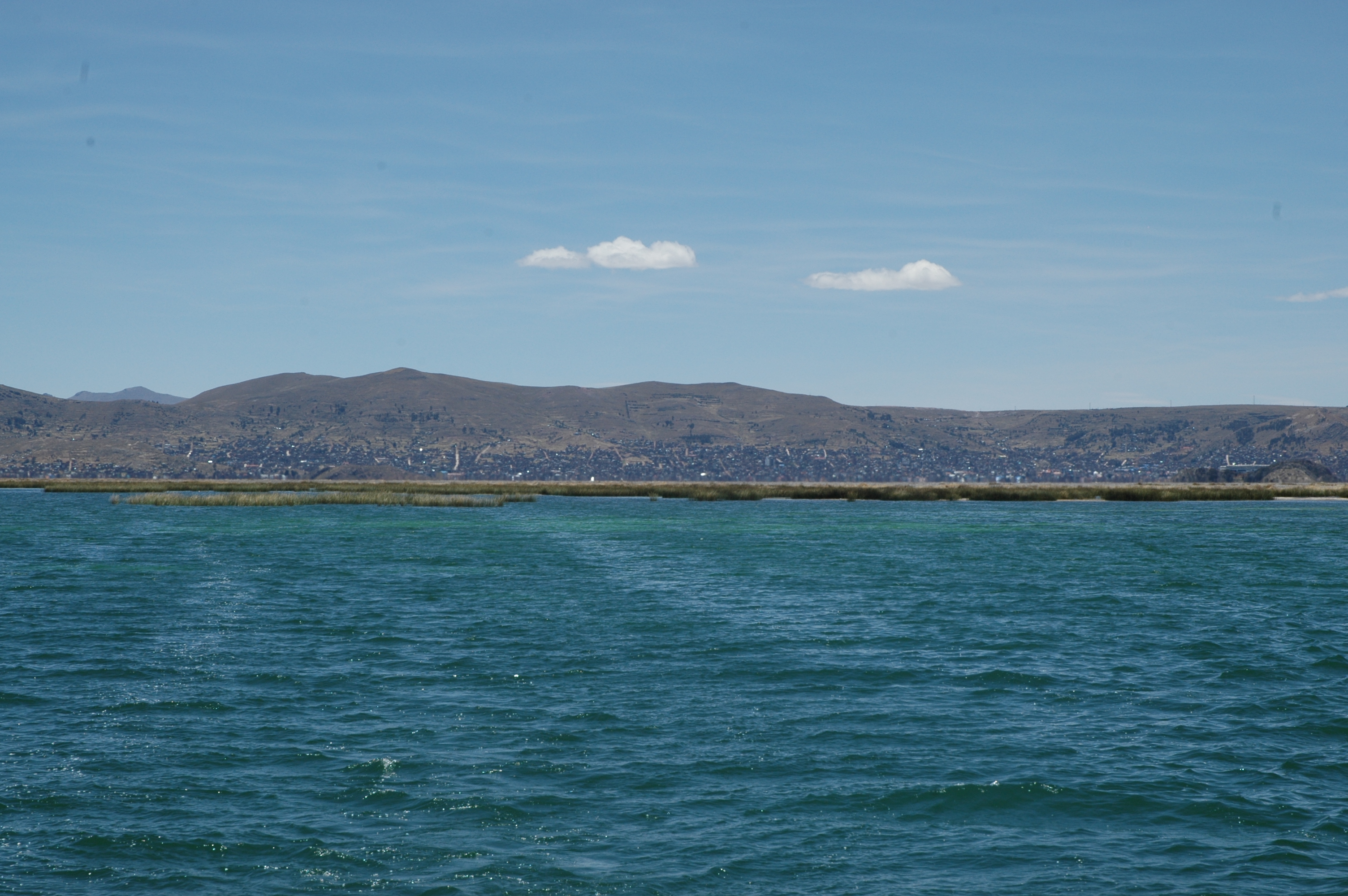 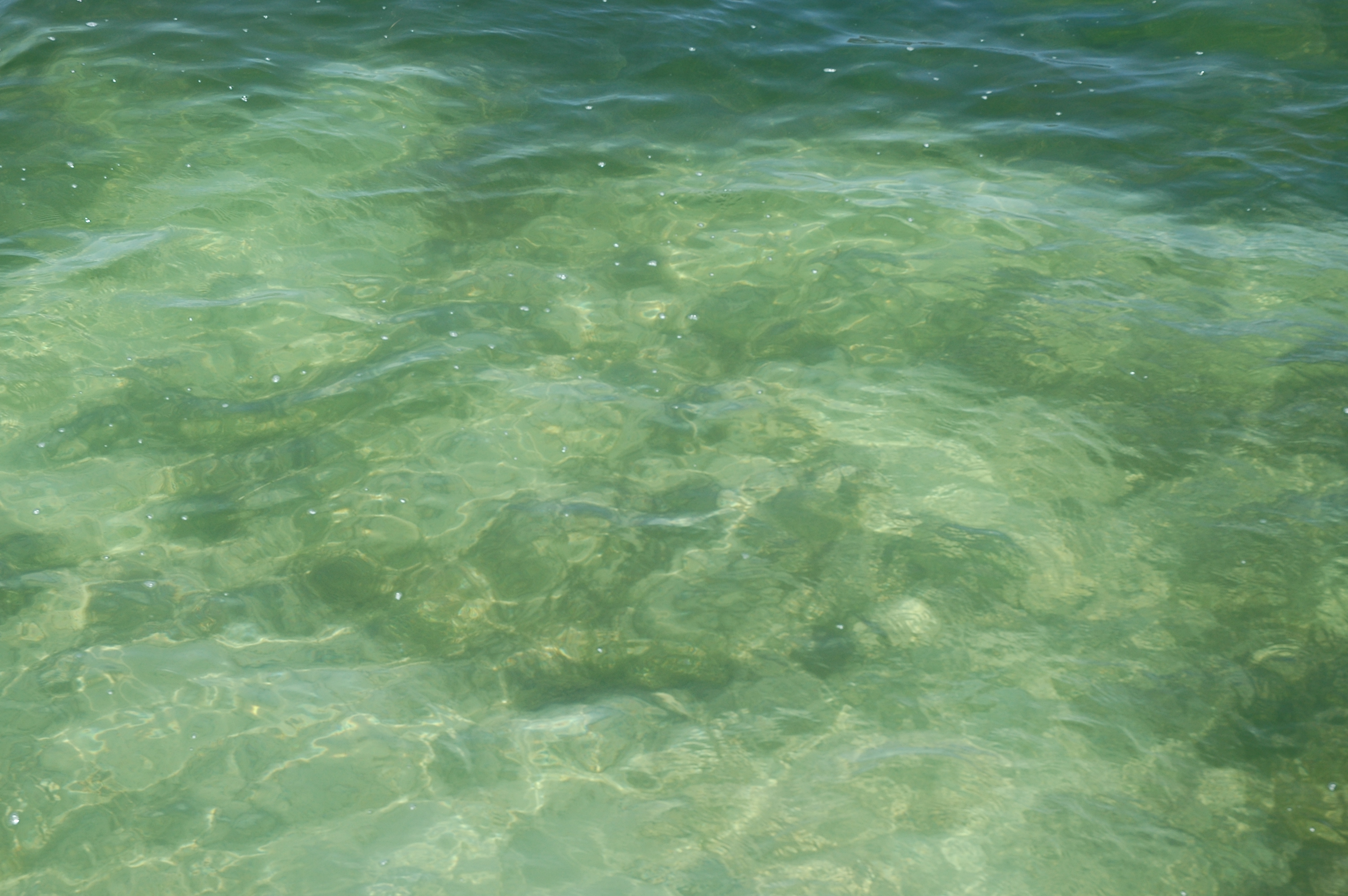 Two hours later, we arrived at another island (none floating) for our overnight homestay with the Amantani people. We were welcomed warmly by the ladies of the island who were also dressed in their traditional costumes. I couldn’t help but contrast the lives of the women here to my own life. They work hard! They are up at the crack of dawn and although they all have mobile phones and perfect signal there are few other mod cons. They dig the ground, grow the crops, tend to the animals, get the shopping, clean the house. There are no washing machines, hot water is a rarity and showers although fitted don’t appear to work. So far we have seen very few of the men. A lot of them work away on the far side of the island or work on the mainland itself and return at the weekends.
Our host Rosalia and her little girl Daisy took us up a path that was once more rendered Everest like by the altitude. Their house was beautiful. The rooms are basic but clean and bright. And the view…well that speaks for itself. We joined Rosalia and Daisy for lunch in their kitchen. The whole island is vegetarian and the main staple is quinoa (our old friend) and root vegetables such as carrots and a wide variety of potatoes. It was certainly hearty which was just what we needed. 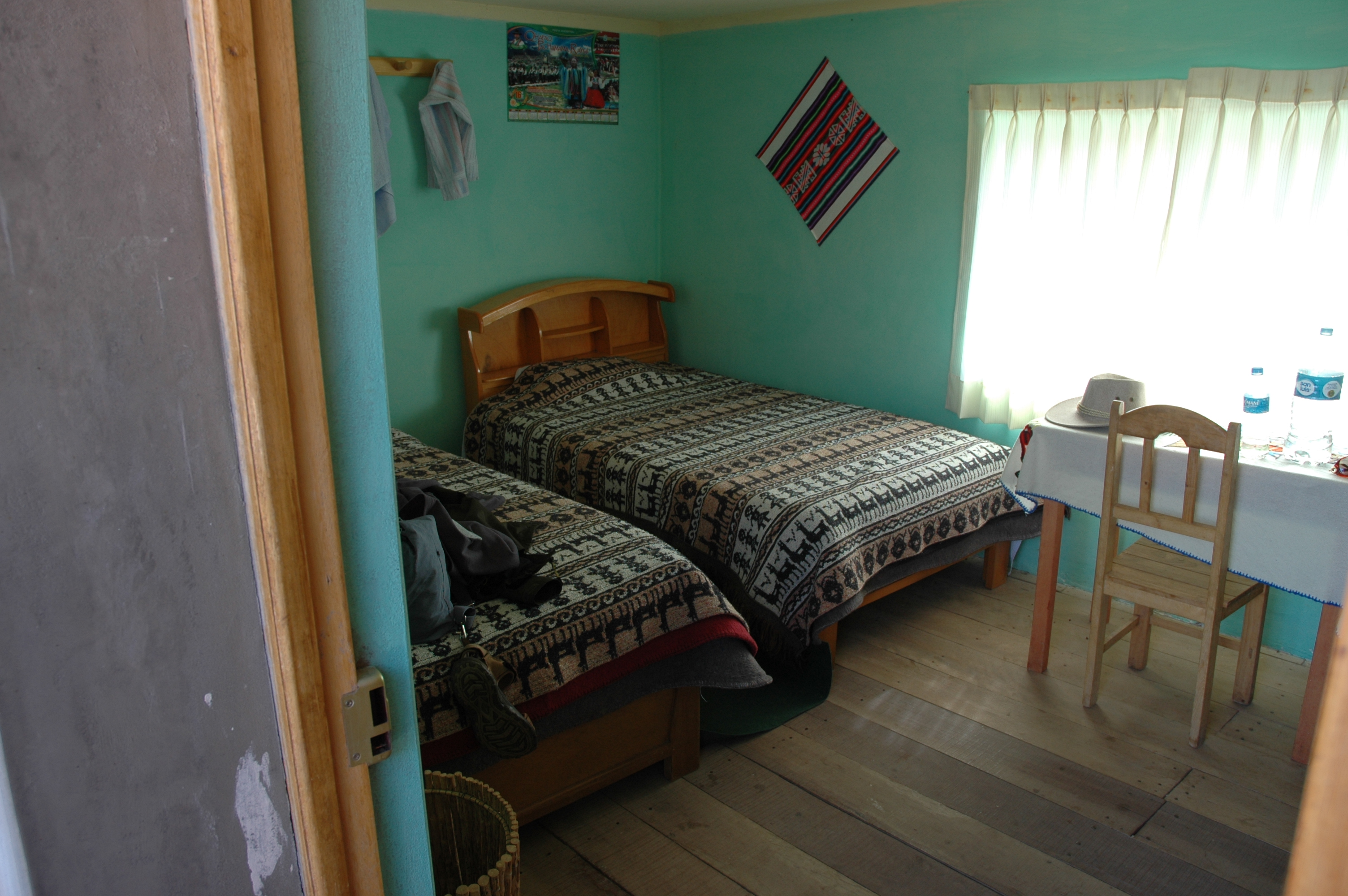 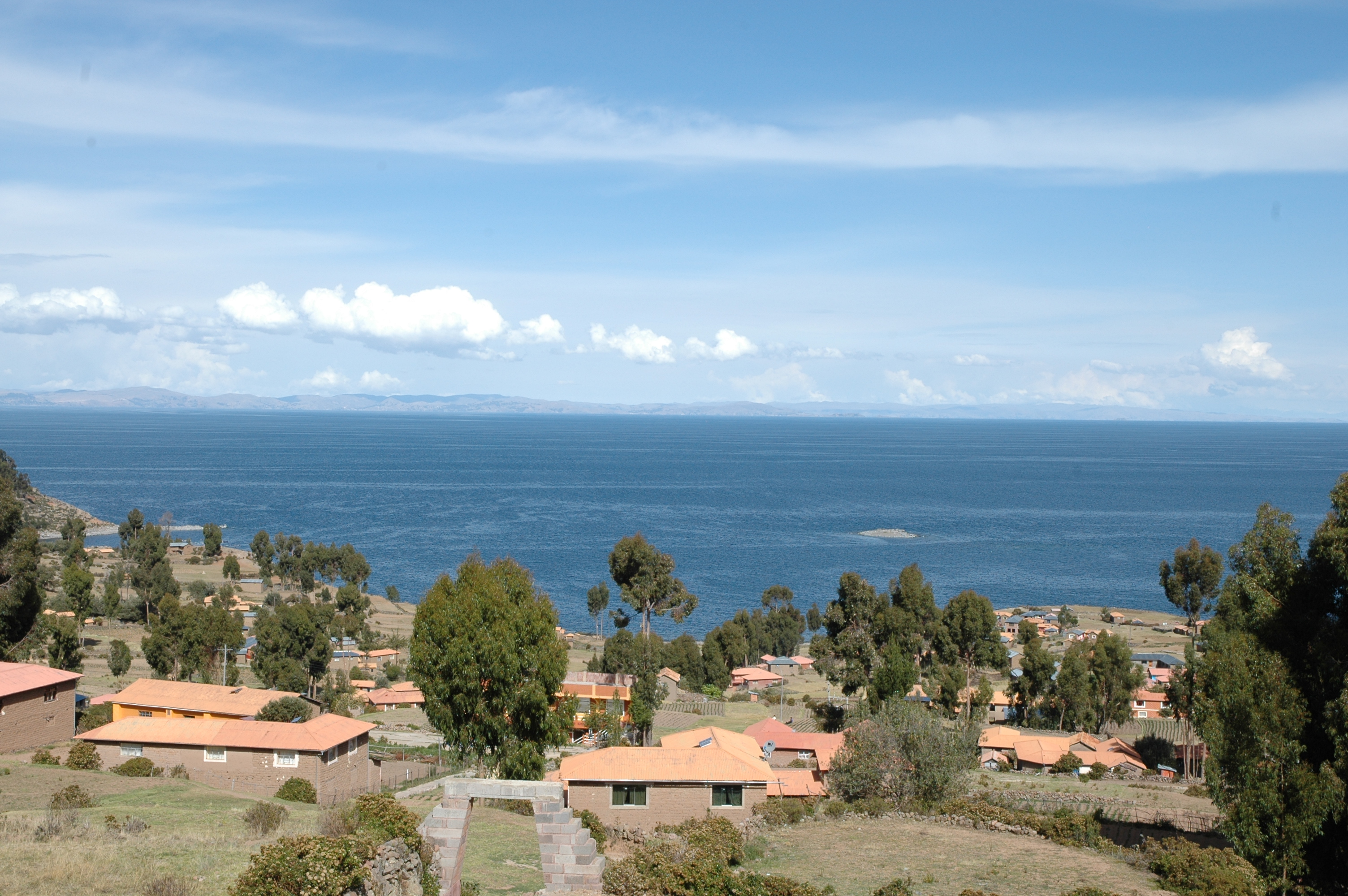 Although our Aymara was none existent, our Spanish very very limited, and Rosalia’s English limited we managed to communicate quite well. I sat with Daisy and encouraged her to write and draw in my book. I did this last time I went travelling too. I think children’s drawings are truly beautiful and they cross the boundaries of any language. 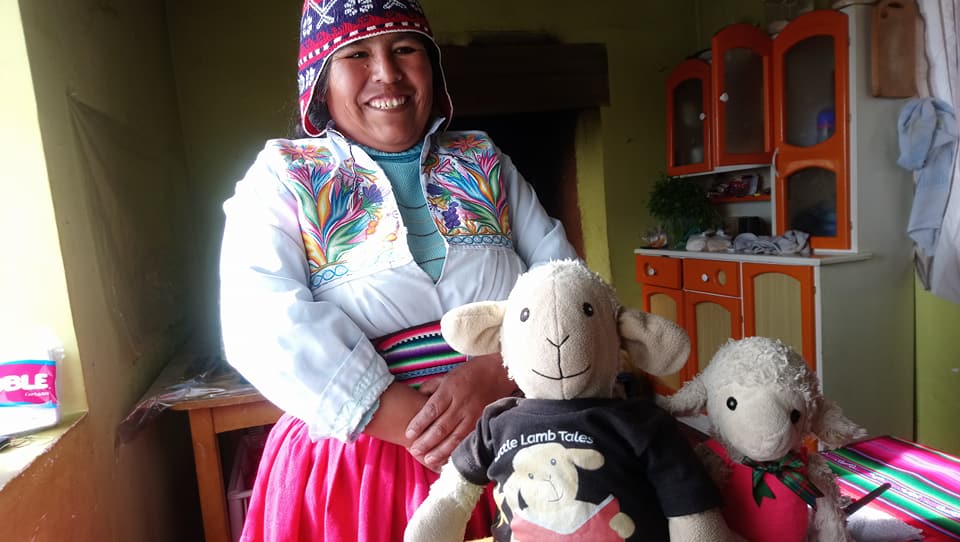 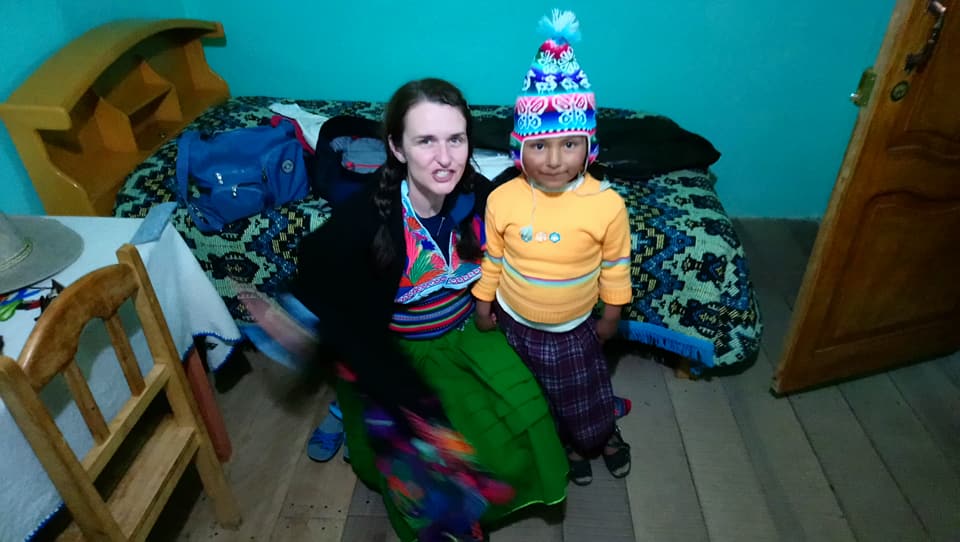 No rest for us now though, Javier rounded us all up and we found out more about the Aymara people and Amantani island. He also gave out sprigs of a plant that is crushed in your fingers then inhaled to give you an oxygen boost. It certainly seemed to work.
As a group we were given the option of climbing to Pachamama’s temple for the sunset or another one. Most of the group opted for Pachamama and Javier told us to collect a small stone to take with us. Upon arriving at the temple we must walk around it three times anti-clockwise asking for what we would like for the coming year. On the third circuit, the stone we had collected was to be left as an offering somewhere on the temple wall.
At the top of the temple, we duly walked around and left our offerings before watching the sunset over the lake and islands. It was pretty chilly and the wind was gusty in places but the view itself was beautiful. All around there were couples, groups or solo travellers just sitting in quiet contemplation of the surroundings. This is what we forget to allow time for in day to day life…to just be in the moment. 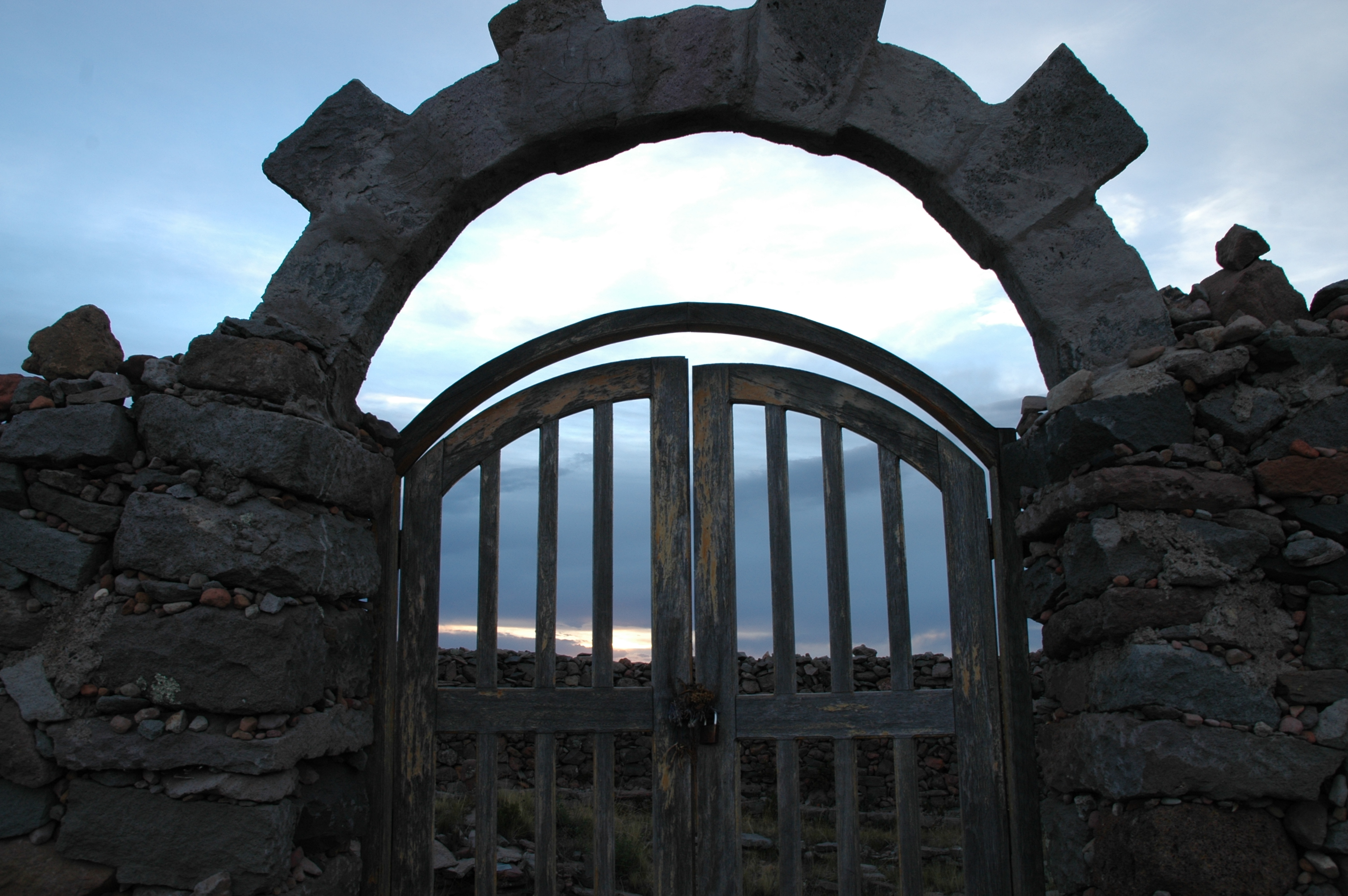 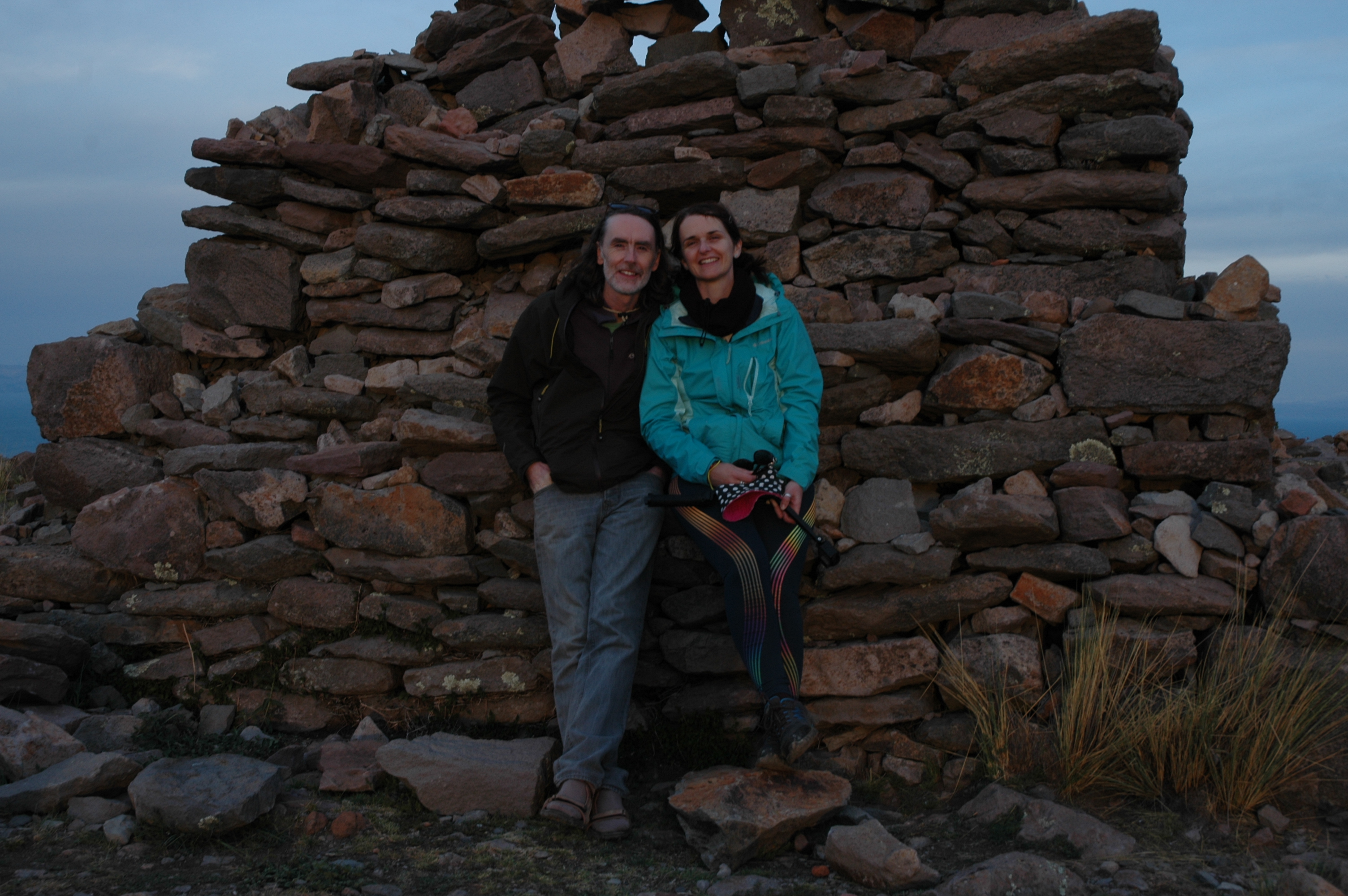 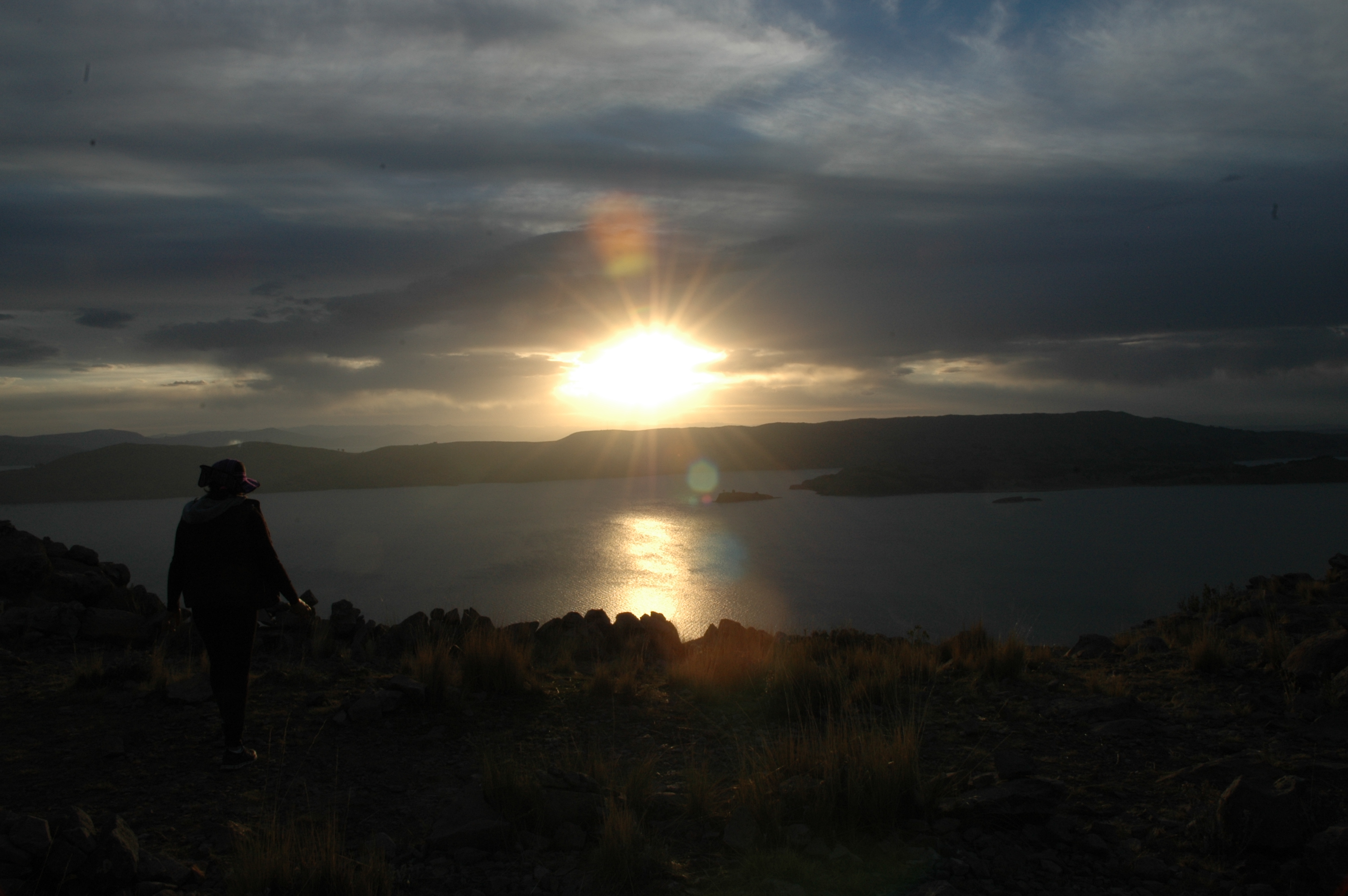 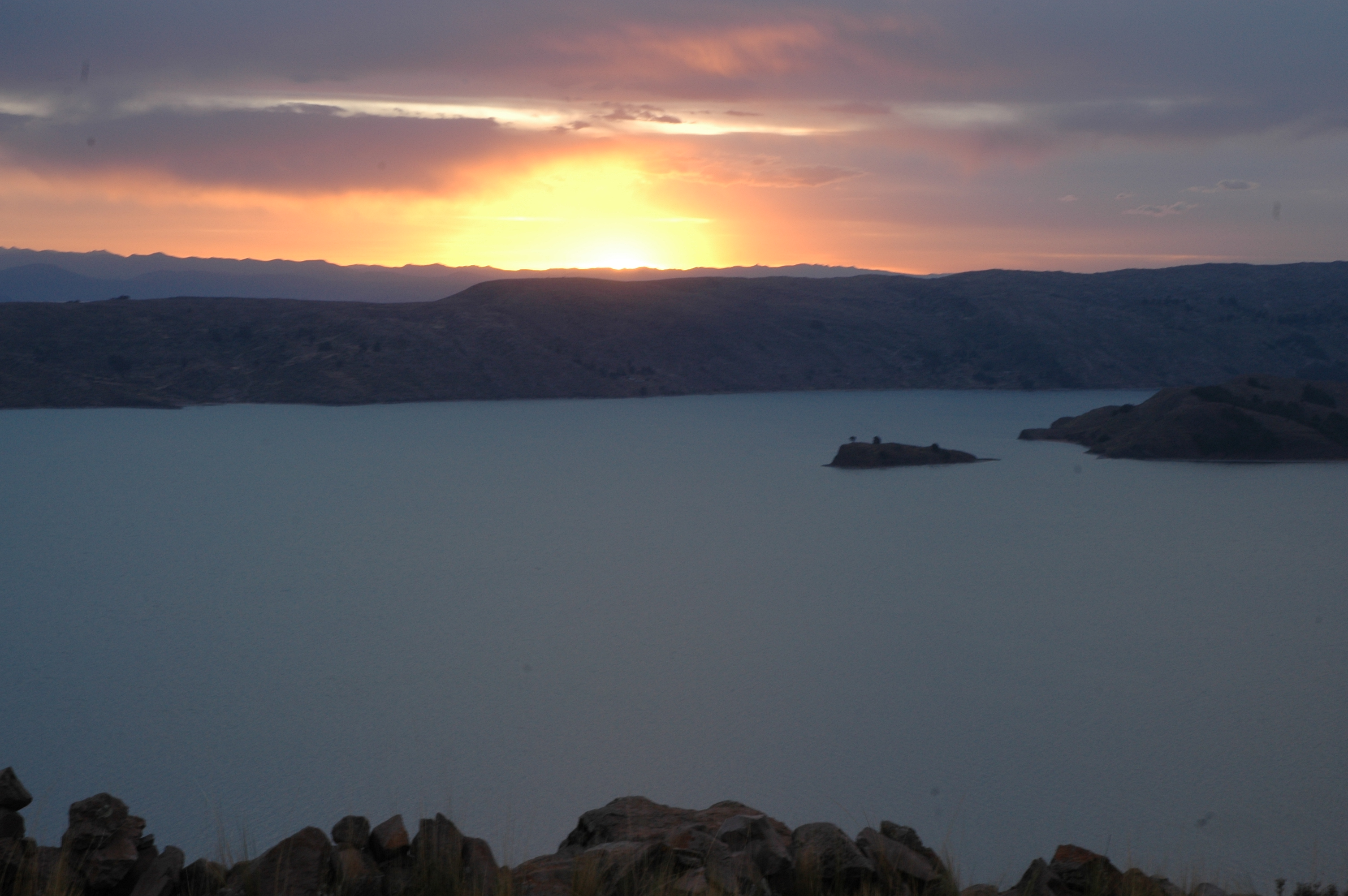 Another meal with Rosalia and Daisy and then we were dressed up in the traditional costumes for the evening dance. There are a lot of layers in the ladies clothes – at least three skirts of varying colours, a long white shirt which is tucked in and then a broad band to tie it all in – tightly! It was like a corset and I am amazed that these ladies can hike over mountains, dig for potatoes and even just sit down with the restrictive feeling around their waist. Colourful – yes, comfortable – no!
And so to the end of our first day on Lake Titikaka. A wonderful experience and one I would definitely recommend to others. 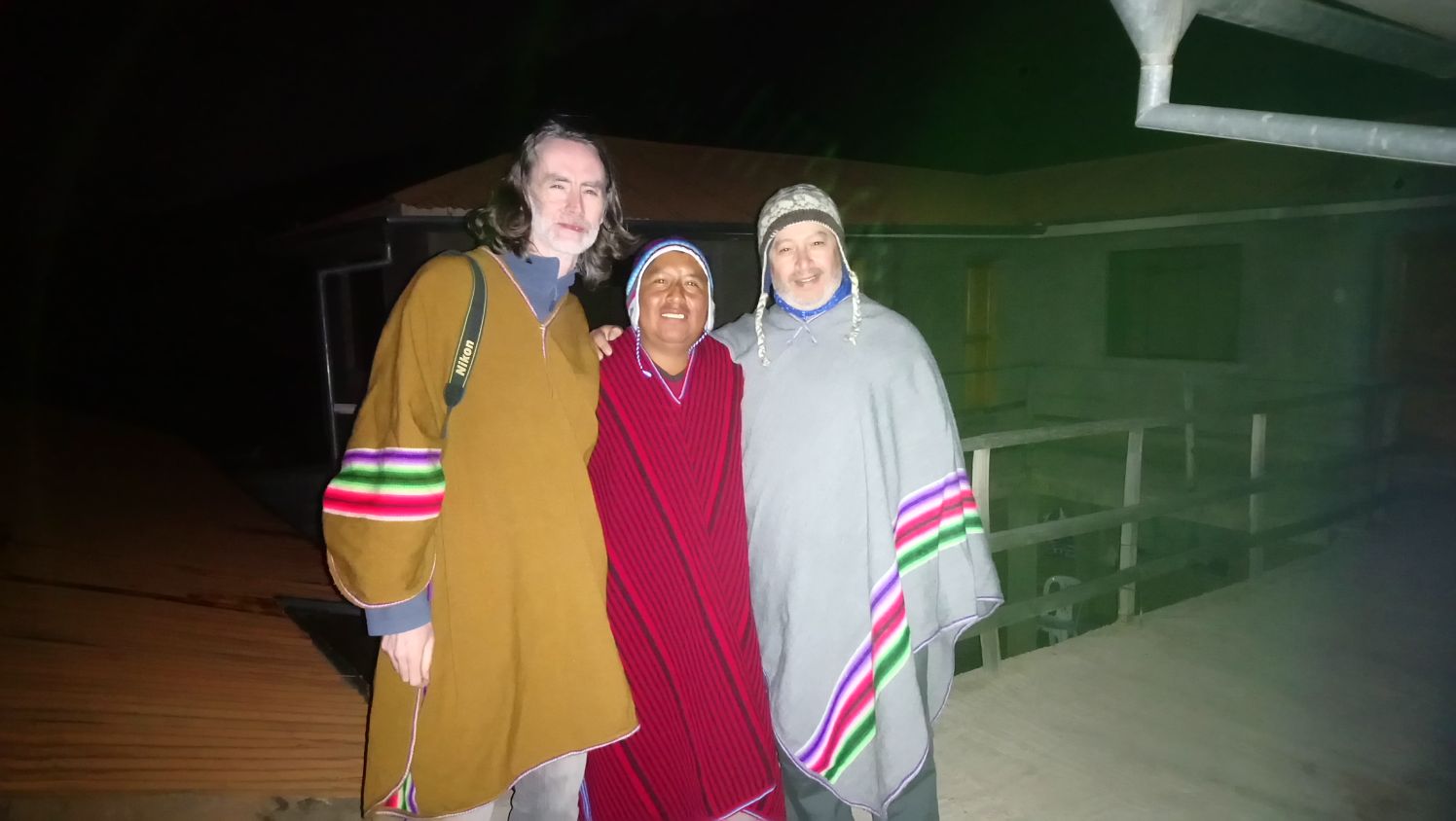 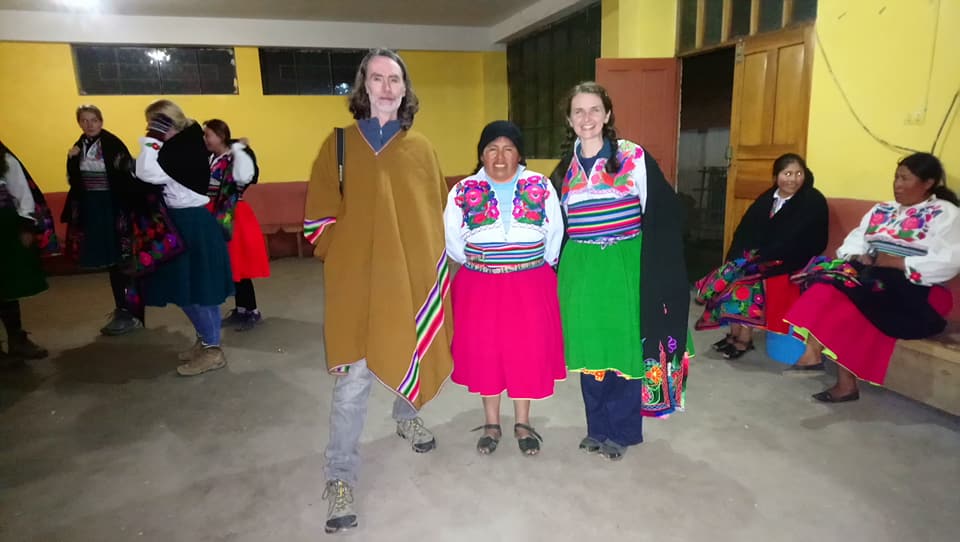