After a delayed flight, we finally flew over the snow capped Andes to Cusco the ancient capital of the Inkas at silly o’clock on 27th November. We were tired, bleary eyed and very aware that we were now at altitude.

For those of you not in the know, allow me to explain a few of the symptoms of altitude sickness. They include – breathlessness, fatigue, dizziness, severe headaches, nausea, sickness and diarrhoea.

Before we left Britain I would have put money on me being the one to suffer with it. I get headaches in the UK, I’ve suffered with Labyrinthitis (acute dizziness) and I can get travel sick in a rocking chair. Sign me up now I thought. Surprisingly and  much to my relief, I was the one who suffered the least. I had a bit of breathlessness and was a bit tired. The other three however, had a good crack at most of the above in some form or another. Coca tea (made from Coca leaves which the locals chew religiously) and altitude tablets were the order of the day

I’d love to tell you a bit more about Cusco but due to our delay we had very little time there before we were off on Day one of our 17 day packed itinerary that would stretch from Peru to Chile.

Our first destination The Sacred Valley and Ollantaytambo. We’d organised this tour before we left the UK with the long  suffering Jennifer from STA. We used a company called Bamba Experience who are based in Mexico and organise tours across Central and South America. Not everything went smoothly but I tell you this, their guides are absolutely fantastic.

Allow me to introduce you to Marco our first guide who took us through the Sacred Valley. Marco was a character, his English and sense of humour both excellent. Before asking us anything, he would start the sentence with the phrase “Question….” and this became one of our catchphrases for the entire trip. The first question he asked was as follows “Question, can you do caca in the coach toilet? No no no – only for pee pee. No caca!”. This would be repeated on every vehicle we travelled on apart from planes for the foreseeable future. 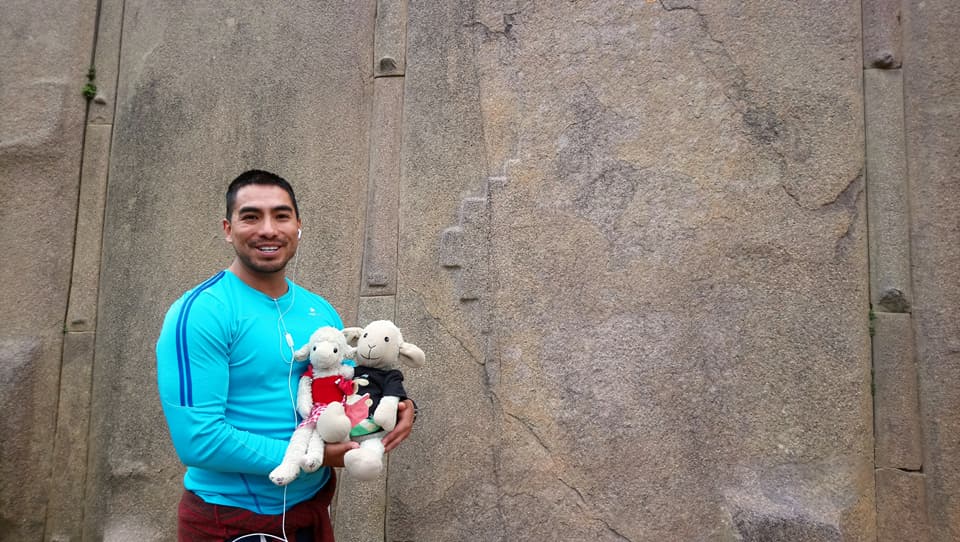 Passionate about the history of the Inka people and their legacy Marco really brought it to life for us. Although sensitive about checking whether there were Spanish tourists in our group, he didn’t hold back from the reality of the Conquistadors (and Catholic church) and how they devastated the Inka culture, religion and way of life.

Our first stop off was at a place called Pisac. Here we saw firsthand the famous Inka terraces that have been here since the 15th Century. An ingenious way of making mountain terrain useable for growing  crops and vegetables, many of the terraces near here are still used today.  And over on the  hillside overlooking  the terraces lots of holes in the mountainside. But, as Marco explained these were no ordinary holes, they were in fact tombs. It was here that the nobility of Pisac would have been buried. Unfortunately the invading Conquistadors raided them and stripped them bare. 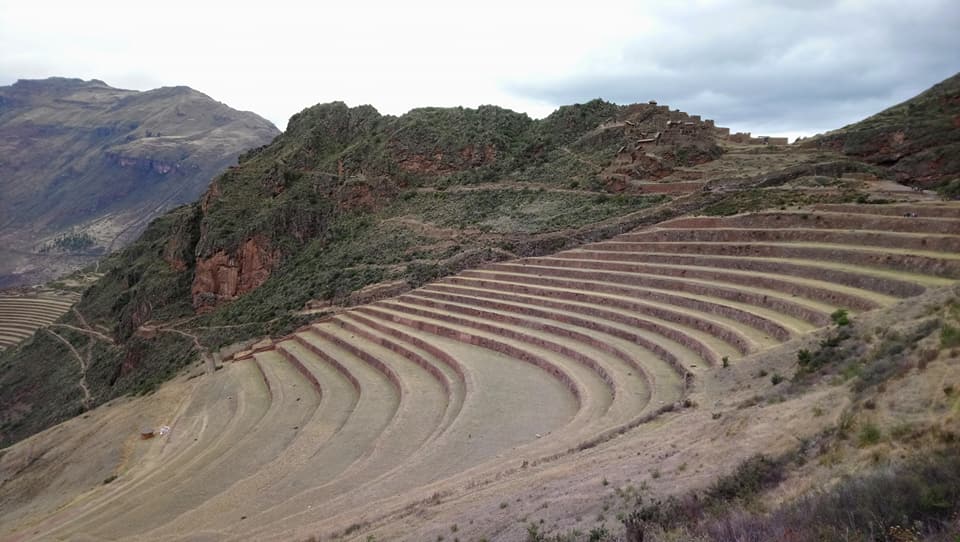 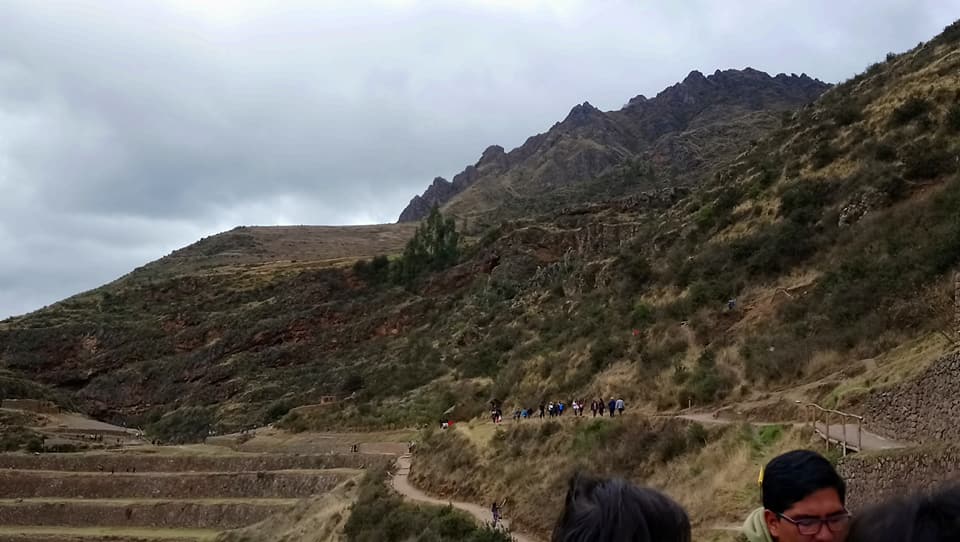 Looking at this with 21st Century eyes it is so saddening to think that as a race, humans haven’t really progressed all that far. There are still wars going on around the world where one way of life tries to force their way of life on others. There is still fighting over land, goods and resources. I wonder if we’ll ever learn.

From here we headed to Ollantaytambo. This was exactly as I imagined an Inka town to look. Cute cobbled streets, a little square, quaint yellow and peachy coloured houses, terracotta coloured roofs and the ancient Inka Stairway to the ruins. The town itself (many of the buildings date from the  time of the Inkas) sits in a valley between the ruins and a craggy mountain with face like images. One of these faces is alleged to be that of Ollantay, a soldier, whose final resting place was here and who gives his name to the town. 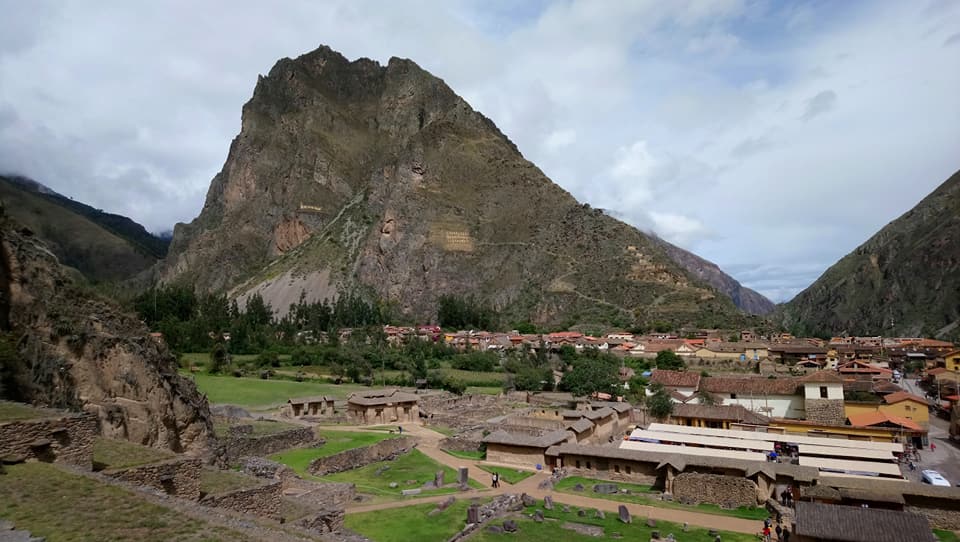 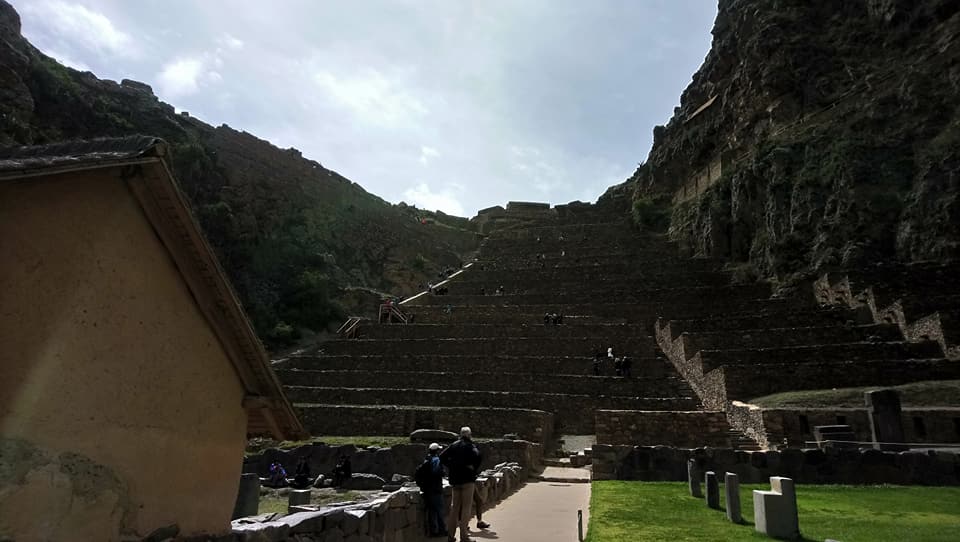 The ruins themselves are pretty spectacular. The sun temple at the top of 200 steps (the altitude really adds to the workout) is made of precisely carved stones. They fit together as if they have been precision cut with machines yet the tools then would have been chisels and rocks. And how on earth did the stones get up there? Surely it would have been easier to leave them below? Speculation has been rife for years – is it down to aliens? Has technology existed in previous times? Was it magic? Whatever you believe, you can’t see the temple and not feel yourself in the presence of something special.

A couple of years ago, Marco himself was involved in a project which tried to recreate how the stones would have been brought from the original quarry over the valley to Ollantaytambo. As the population of the town wasn’t great enough (and wouldn’t have been at the time either) volunteers from surrounding places had to be drafted in. Working every day for hours at a time, the stone did move but it took them a whopping three months.  For ONE stone. Speculation will no doubt continue for years to come.

Marco also made another interesting point. In his opinion, the temple wasn’t finished. As the Conquistadors got closer and eventually invaded the decision was made to simply abandon it.

It’s nice to think that once again, this sacred place is revered. And not just by the Peruvians. On the day we were there, there were visitors from England, Spain, Germany, Argentina, Australia, France, Japan and beyond. The Inkas may have left no written language behind but they left some pretty spectacular monuments.

It was here we left Marco as he and the rest of the coach carried on. We were bound for the railway station to catch a train for Aguas Caliantes or Hot Waters as it’s known in translation. Our trek to Machu Picchu was a step closer.