I’m going to struggle to capture the sheer brilliance of this day in a blog. Visiting the ancient city of Machu Picchu had been on my wish list for years. And it was everything I expected and hoped for plus more.

We got up early (really early) to be greeted by clouds hugging the mountains. This did not look promising. However when we met Jair in the foyer he assured us, with confidence, that it would clear by mid morning.

Crossing the nearest bridge we climbed aboard one of the many coaches and set off up the steep, zig-zag road to the entry. It was pretty hairy as we were swung around hairpin bends and waited with baited breath to see if we would be catapulted into the way of an oncoming vehicle. After a good fifteen minute’s journey we arrived, showed our tickets and we were in.

The cloud cover was much thicker here than down in the town. In fact it looked more like fog with no visibility beyond about fifteen foot. Despite this, Jair continued to reassure us that it would clear. 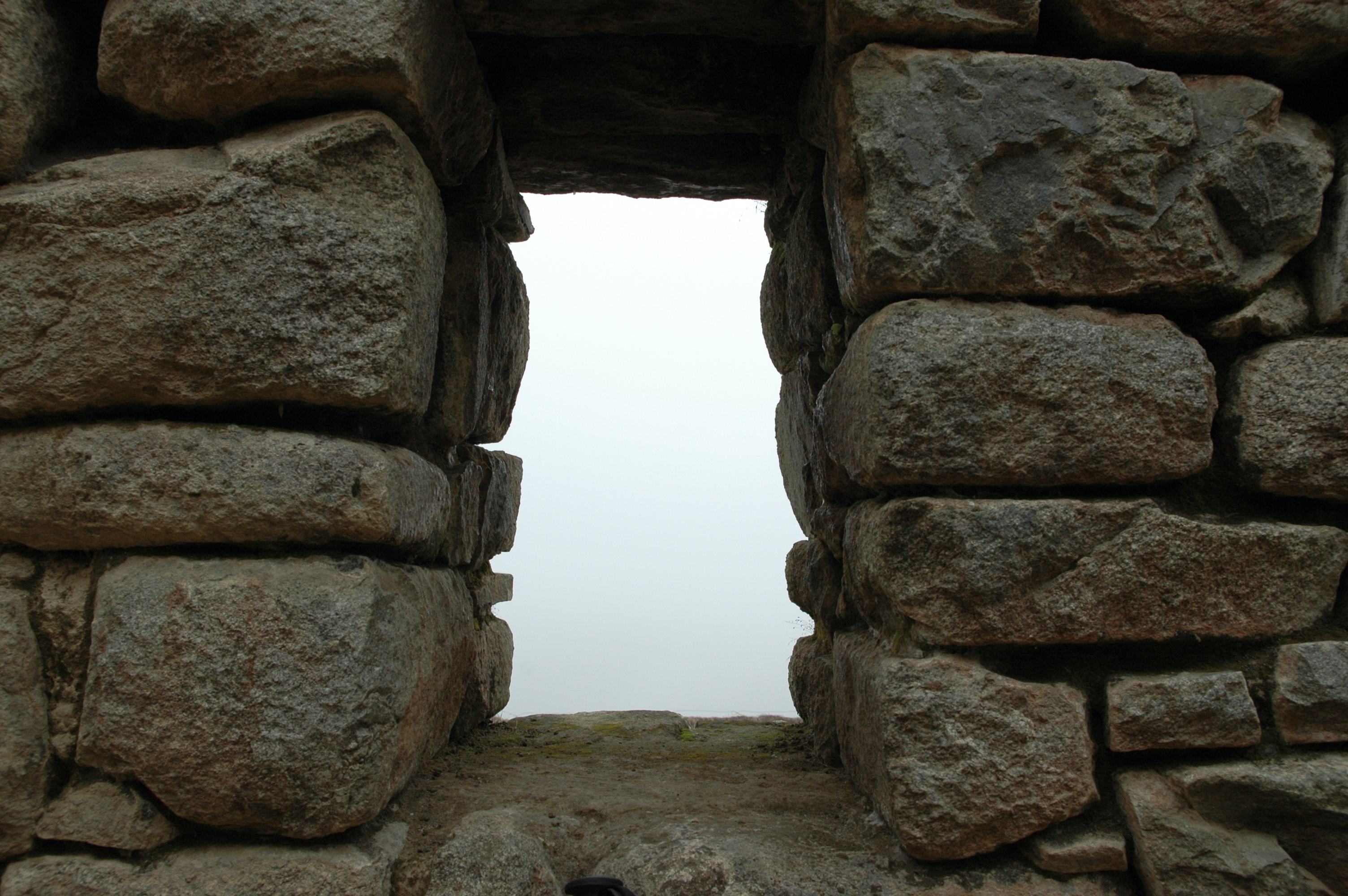 Jair gathered us around and began to tell us about Machu Picchu or Old Wise Mountain as it means in translation. There are three levels of belief in Inka tradition, the underworld or Ukhu Pacha, the reality/middle world or Kay Pacha  and the cosmos or Hanan Pacha. Ukhu pacha) was ruled by Supay and Hanan Pacha by the Sun God Inti and his sister the Moon Goddess Mama Quilla. But the most important of all the deities – Pachamama. Also known as Mother Earth or Mother Nature the Inka believed she was in charge of earth, sun, moon and water. Responsible for fertility, crops and the harvest she was the most revered of all the gods and goddesses and still is today.

As he told us about Pachamama and how people still leave offerings for her and ask for her guidance I felt really moved. The very mountain we stood on felt full of energy and a truly spiritual place. And then, as if Pachamama had heard our worries about the cloud, they slowly started to creep back up the mountains. Almost as if Mother Earth was pulling them back as we would curtains. Where there had been a soup like cloud there was now a frankly show stopping view. The Inka mountains were smiling down on us. 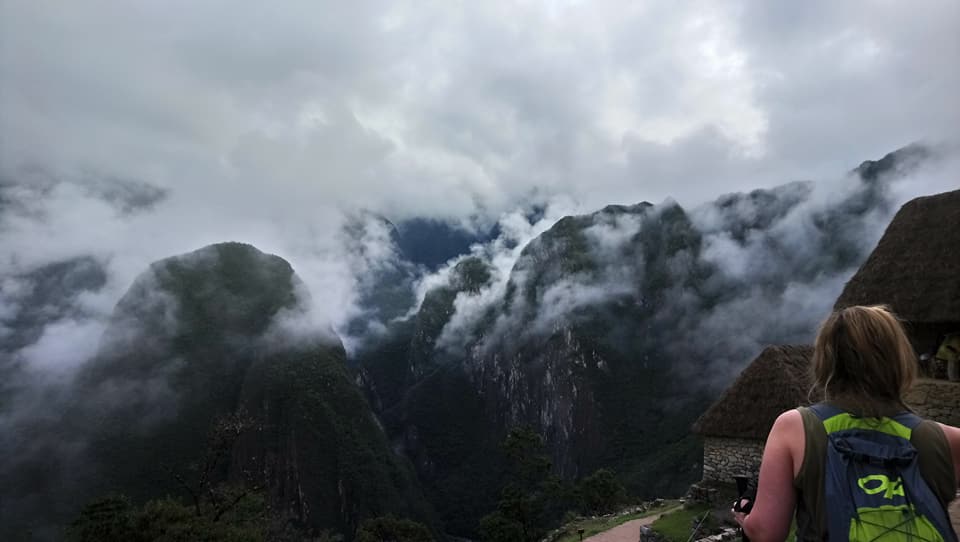 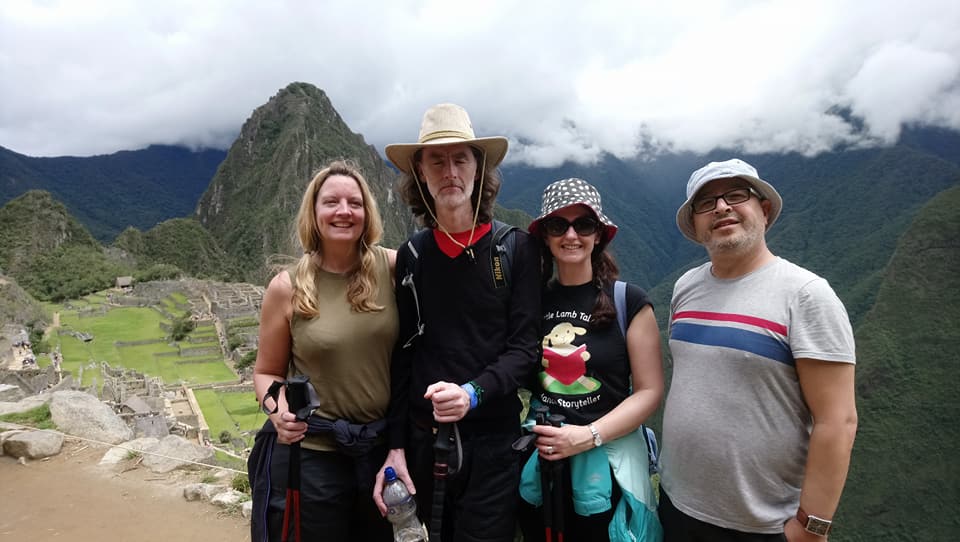 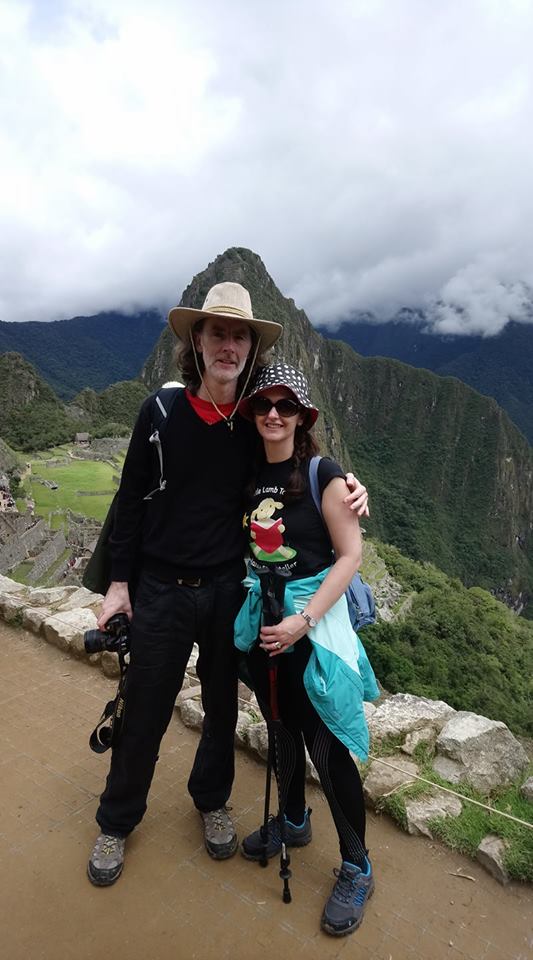 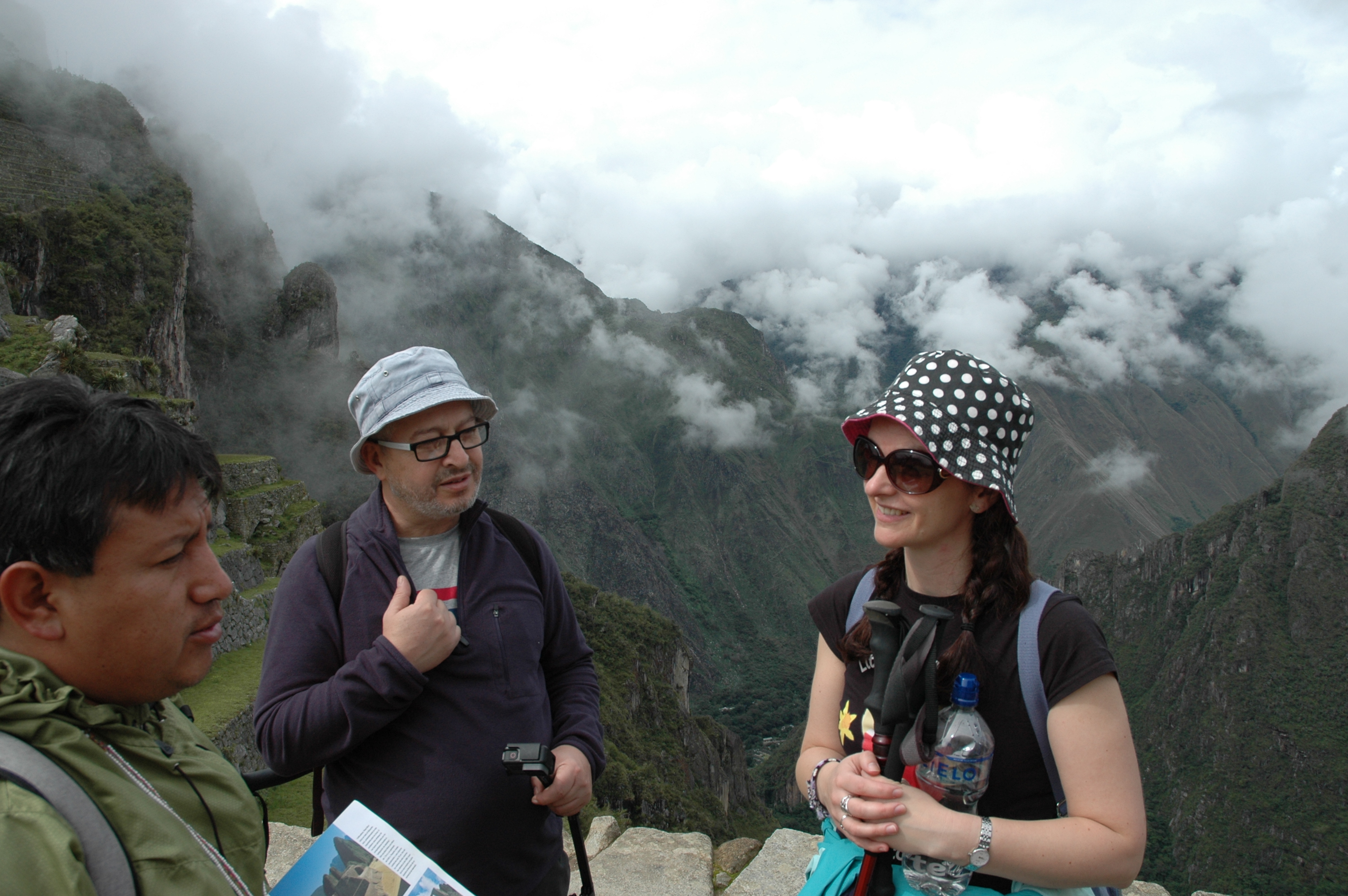 As we continued around the site, Jair explained more about the traditional culture and beliefs. It was an equal society with gods and goddesses given equal importance. There were both priests and priestesses, kings and queens, teachers of both sexes. One of the key beliefs was that knowledge was wealth.  The  more you knew, the richer you were. And to share that knowledge with others was to be richer still. A society that revered teachers and learning…I think there are some lessons we need to be reminded of today! 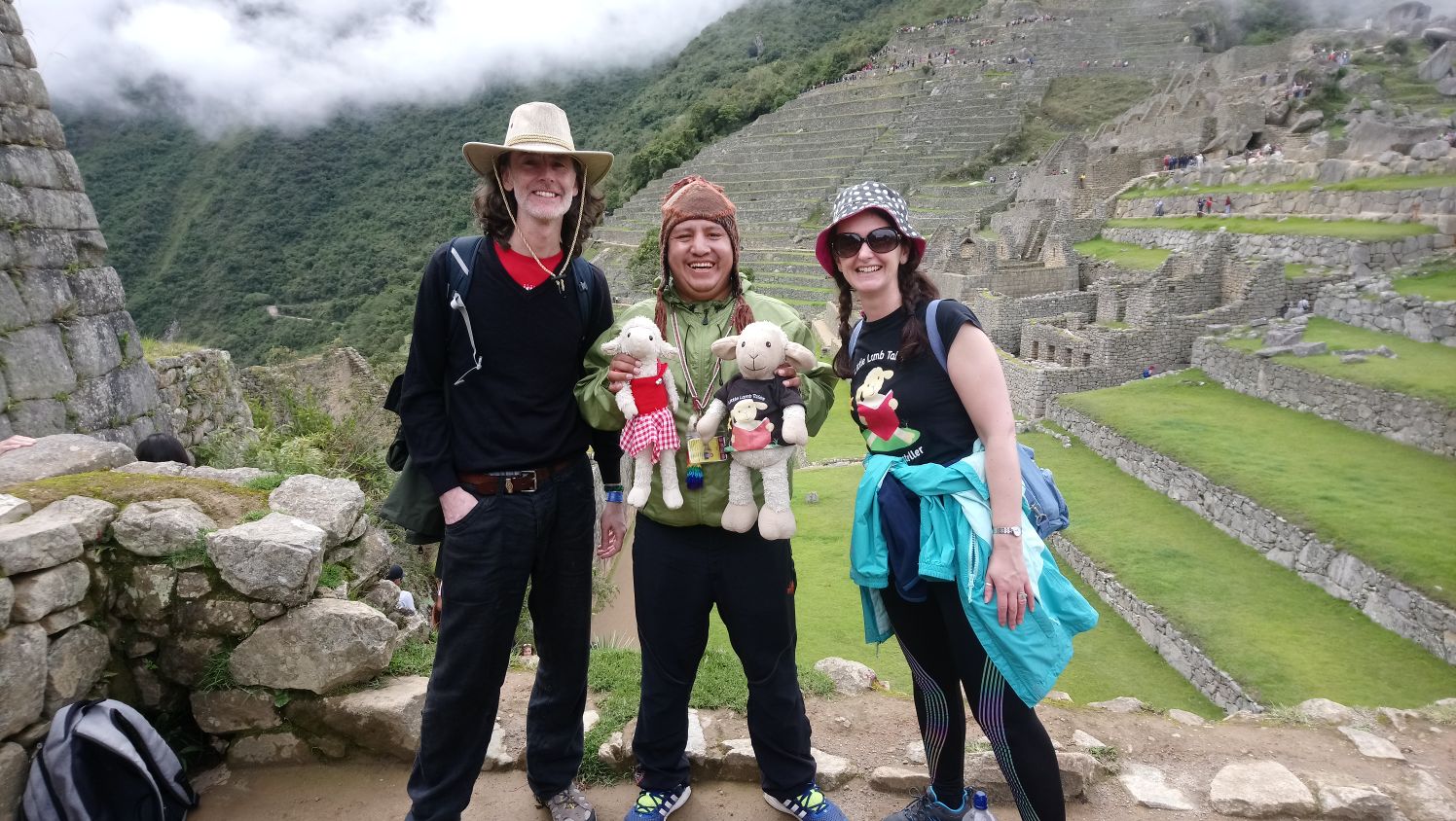 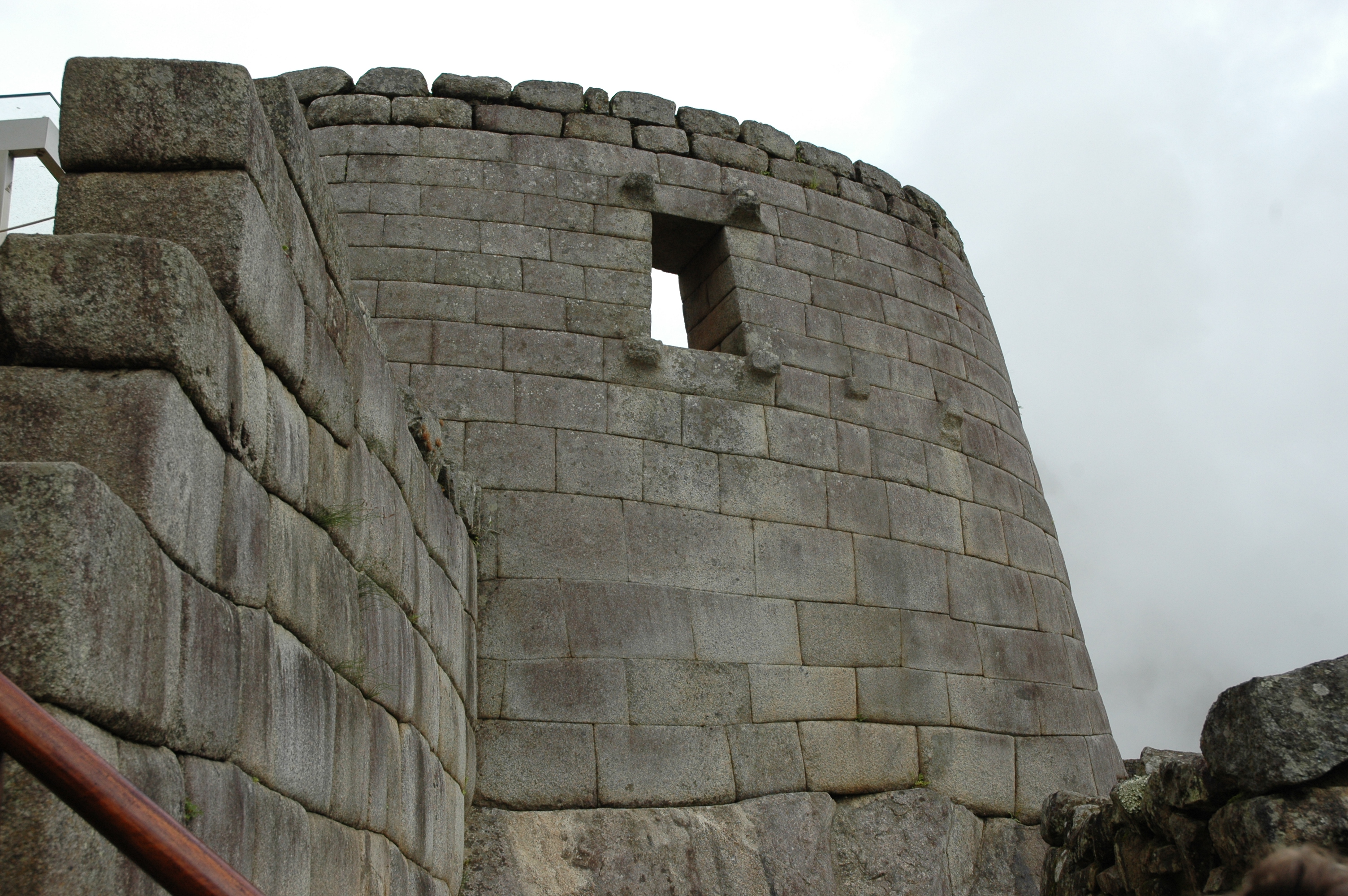 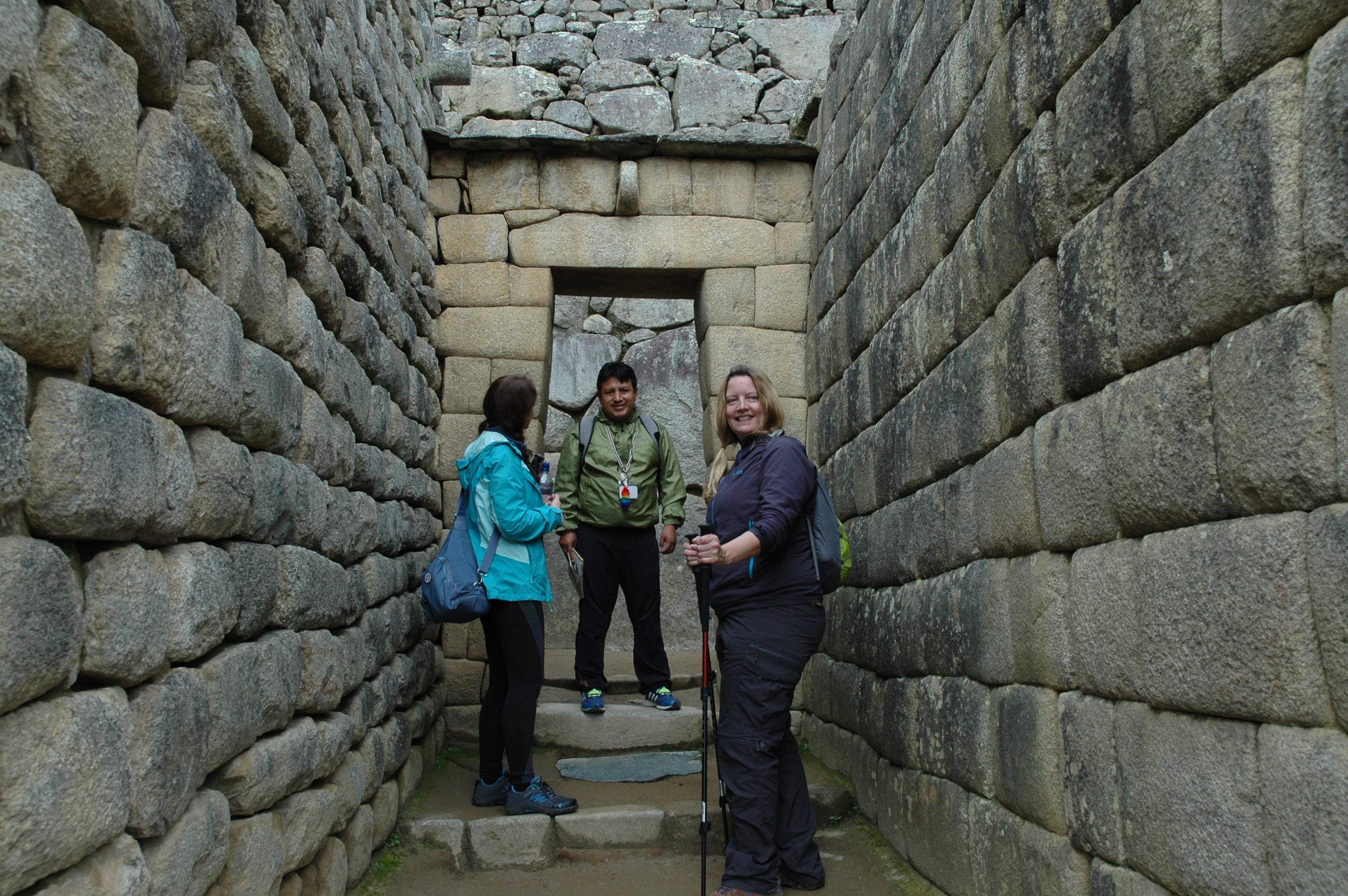 Despite the Spanish Conquest and with Catholicism on the decline, many aspects of the inka traditions and beliefs remain including

Love and respect yourself

Love and respect others

Look after your health

Jair also pointed out (as had Marco in Ollantaytambo) that the myth that the Inka’s took part in human sacrifice has been greatly exaggerated. This practice was not as wide spread as originally thought and was only really prevalent for the last thirty years of the empire. Sign me up to the Inka beliefs without the sacrifice please.

Jair left us mid morning (and as he’d promised the weather had indeed cleared) so we made our way up to the Sun Gate. This is positioned on part of the Inka Trail and would have been used by pilgrims arriving at Machu Picchu. Although not a hard climb, at altitude it seemed so. With frequent stops on the kind of hill that Dom and I would normally take in our stride we made our way to the ancient gate. On one of these rest spots I happened  to look up and there above us was a perfect circular rainbow. I’d never seen one before and the first thing that struck me was all the wishes held inside it. I already felt as if one of my life time wishes had come true so anything else would be a bonus. 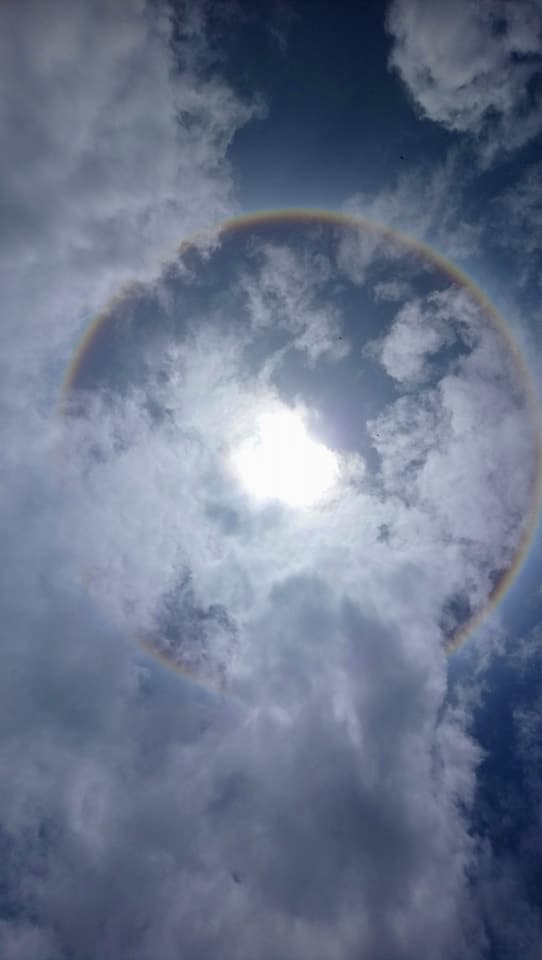 As we reached the Sun Gate we turned and there it was – the view that’s always used to portray Machu Picchu to the world.  it was every bit as wonderful as I hoped. I can only imagine the feelings and thoughts of the ancient people who had toiled and trekked for days, weeks or months to get here. They must have felt it was all worth it. I know we certainly did. 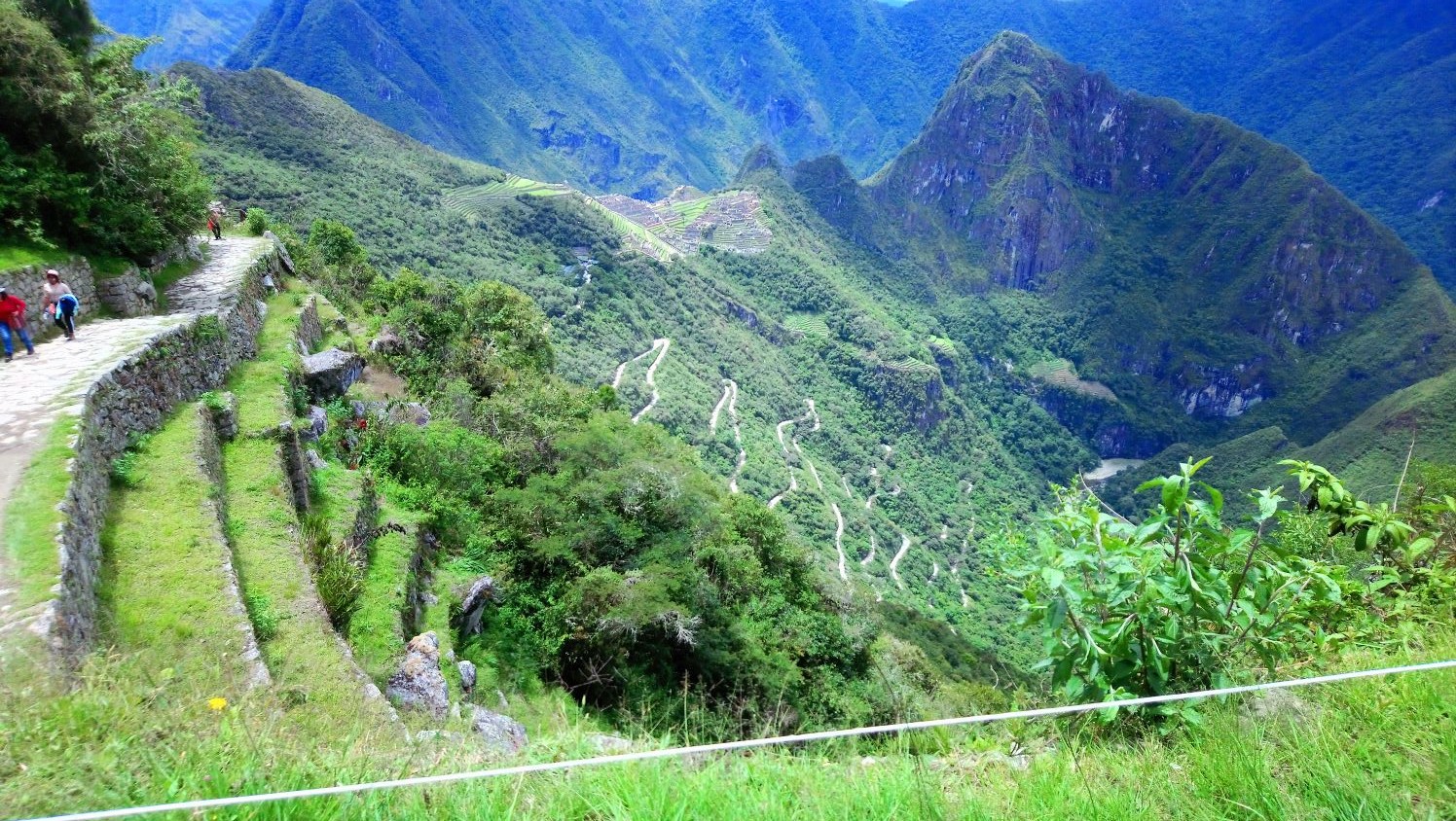 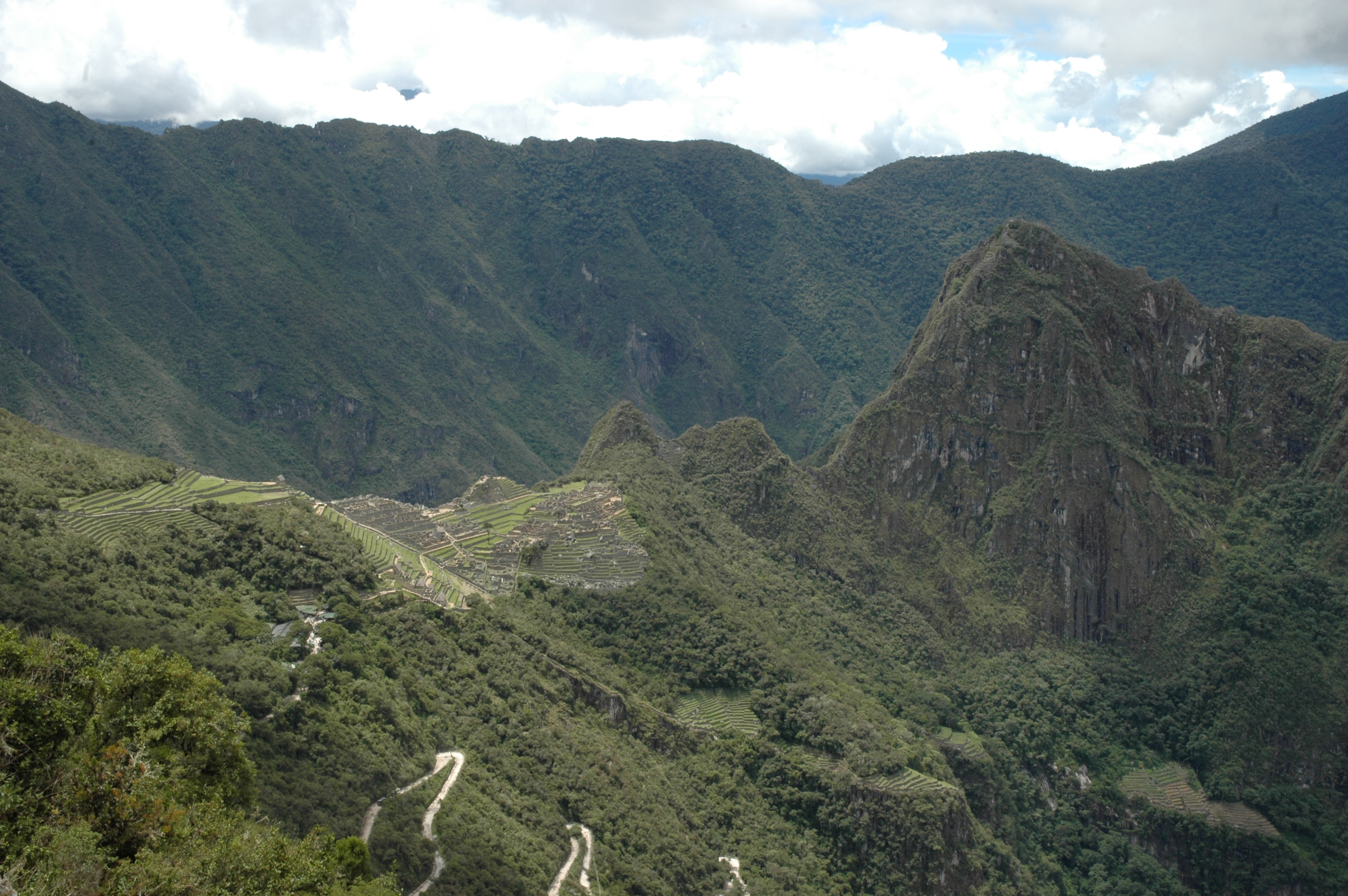 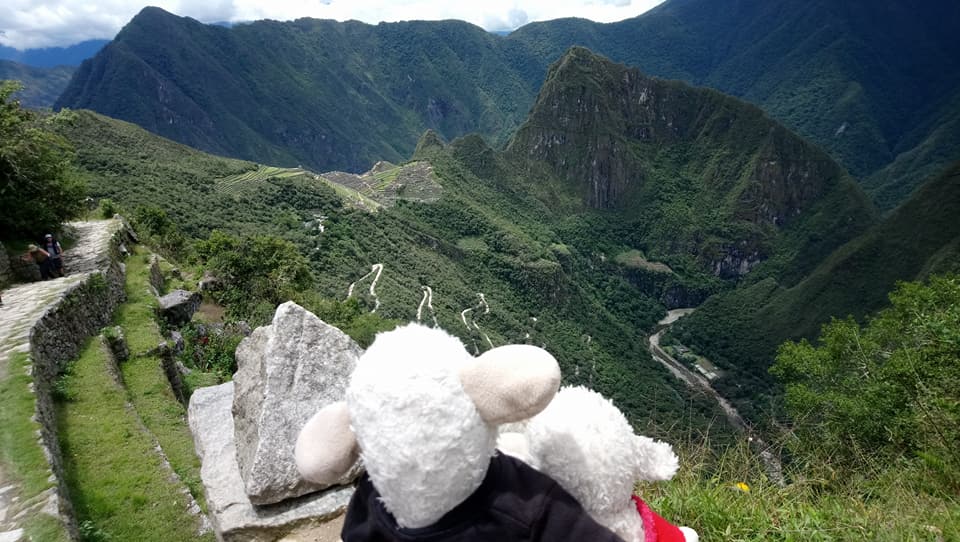 Stopping off to say a quick hello to the llama and alpaca who roam the mountainside supremely unbothered by the tourists, cameras or selfie sticks (one of them simply turned his back on us and did a big wee and poo to show how little regard he had for us) we made our way back down to the entrance and the coach stop. 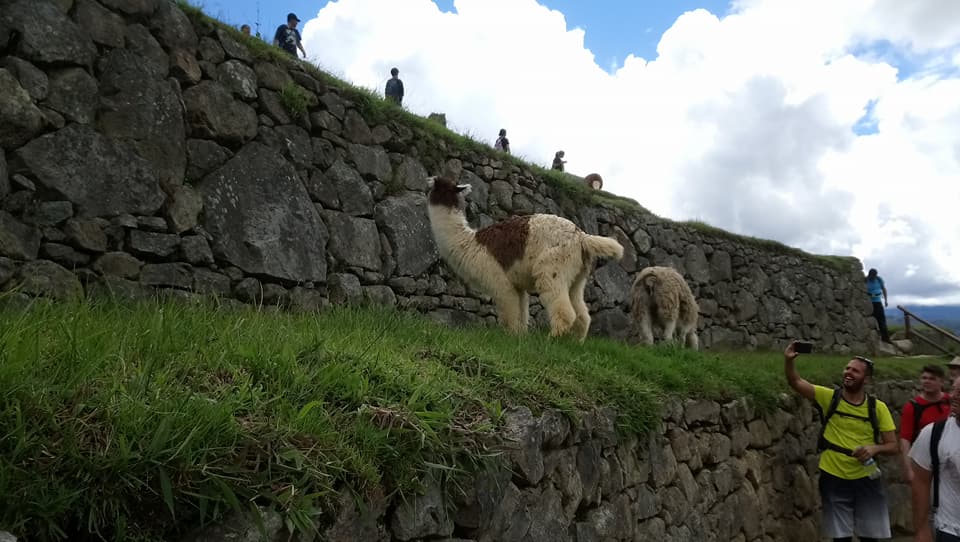 And it was only once we were there we realised something was amiss. Where there had been five or six buses all waiting to take tourists back down at regular intervals, now there were none. It transpired the coach firm were on strike. This left us no alternative but to walk all the way back down to Aguas Calientas.  We had two choices the zig-zag road or steep steps cut into the side of the mountain. Mmmm talk about Hobson’s Choice!

Helen had been suffering with her hips and managed to blag her way onto a lift down. Myself, Dom and Kass took to the road. We’d made the decision to hire trekking poles for Machu Picchu and let me tell you those trekking poles came in very handy indeed. Using a mixture of steps and road, we finally made it back to the bottom. And when Helen told us of being bundled into the back of a truck with no way of seeing out, the break neck speed journey, screaming passengers and being flung around the corners I was mighty glad we’d had to walk.

What a truly exhilarating, wonderful, special and remarkable day. And how did we celebrate this wondrous time? Glass of bubbly? Glass of red? No we were so tired it was dinner and bed…by 8.00pm. Pachamama had certainly taken it out of us!