It’s been a busy month for Lamby and the rest of the team. Earlier in the month we launched the latest Lamby book….Pirate Lamby and His  Woolly Crew. This  story features all of the team with Flossie, Alfie, Lily and Cordero all being very proud of their starring roles, especially as it whizzed up the Amazon charts to be number 2 in its category. 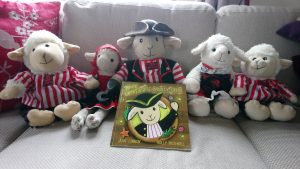 People often ask where I get the ideas for my stories and the idea for this one came long ago when  I was still teaching in London.  I was due to be filmed for Roehampton University and the video would be used to train student teachers. Like most teachers, when I heard the word film, I went into that state commonly known as panic!

As we were learning about the Seaside I decided to write a poem for the lesson that would be filmed. The poem became a short rhyming story called Pirate Jack. Following the filming, the camera man came over to me and said “You should try to get that published, it was brilliant!” I thanked him and put the story to one side only to return to it about 8 years later. By then Pirate Jack was calling out to be replaced and the obvious choice for the main character was Lamby aka Pirate Lamby. A role he fills with great panache!

Pirate Lamby and His Woolly Crew  have been busy with personal appearances all  month. Our official launch took place at the wonderful independent bookshop Write Blend. Wearing a Pirate outfit that was  nearly as fabulous as the Woolly Crew I brandished my sword and swaggered in to talk to the audience some of whom were also resplendent in Pirate Costumes. It was a lovely event and we were delighted to have the chance to use Little Vintage Photography who came along and took some wonderful souvenir Polaroid pictures for children to stick into the copies of their books. A great time was had by all. Fast forward a week and The Woolly Crew found  themselves across the Mersey at the newly opened Concept Corner to deliver another book reading. The  young audience here joined in with great enthusiasm (as did the adults).

But audiences don’t have to have huge numbers…sometimes an audience of two is just as good. 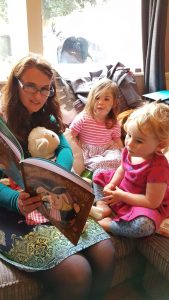