An Ivory Tower with Wheels!

As well as reading, I am also a prolific writer.  Before you start looking for my name on Britain’s Most Published list I have to stop you.  Although my dream would be to have some of my picture storybooks for children published the harsh literary world has so far remained unconquered!

I started writing a long time ago. Like many teenagers, I kept a diary full of angst ridden tales of woe that normally included moans about spots and boys. I did this religiously every day for about 5 years.  Thankfully, I had the presence of mind to destroy said diaries when I was having a big clear out before heading to Uni.  Some people will be horrified that I threw away these little pieces of history.  Believe me, they really weren’t anything to be proud of and I am more than happy that my younger self showed a surprising clarity of thought when deciding to bin them!

Despite this early (and if I’m totally honest) disastrous attempt at writing anything of real merit I wasn’t put off.  However, throughout teacher training and then during my career my writing was always done for one audience only…the children.  I wrote countless Christmas plays, school assembly stories, poems and songs for the children in my care.  And sometimes, I was asked to write things for other classes too.  If you needed a poem about Outer Mongolian Tribal dances, I was the go to poet in the staff room! The question I was often asked was – “where do you get your ideas?”

Where Do You Get Your Ideas?

Mmmmm that’s a tough one to answer. Honestly, I don’t really know.  Apart from a brief time during my GCSE and A Level English Literature courses I have never undertaken any studying specifically for Creative Writing. Similarly, I’ve never joined any writing groups, mainly because trying to find one that is specific to children’s picture books appears to be mostly impossible. I’m sure there are people out there who would champion the merits of both of these training and support mechanisms and if you find a something that works for you – fantastic!
I have to say that most of my ideas just appear in my head and generally speaking through one of the following ways.

I have suffered with insomnia in the past and because of this have a collection of reading and writing materials on my bed side table. This is lucky as the majority of the Christmas plays I’ve written have come to me in the middle of the night (almost like Angel Gabriel if you’re going to be topic specific!)  I can’t explain it any clearer than that but one minute I will be deeply asleep, the next I am awake and groping for the light switch in one hand and my pen and pad in the other. What makes this even more strange is the timing.  Rehearsals for Christmas plays can start any time from mid-November onwards in a Primary School.  This is a time of chaos. A maelstrom of angel wings, lost shepherds outfits, Baby Jesus going missing and children who get attacked by nerves and forget how to sing. There is no time to think about anything other than the play and yet, without fail, it is during this busy and stress inducing time that the idea for NEXT YEAR’s play would decide to invade my brain. This happened virtually every year and taught me one thing: if the ideas arrive you just have to embrace them!

In Times of Stress/Anxiety

I’m sure I’m not the only writer who will tell you that mood can greatly affect writing and inspiration.  Like most human beings I have been through times of great happiness and times of great sadness.  These extremes of emotion definitely influence my writing.  I can honestly say that after my mum’s death from breast cancer, writing definitely helped me to vocalise how I was feeling. I wrote a lot of poetry full of anger, pain, sorrow, grief and a feeling of how unfair it all was.  These poems are on my shelf and not for general view.  In fact a bare three or four of them have been witnessed by anyone.  Having an audience for your writing is a personal thing.  Some pieces you long for the world to see, enjoy and celebrate. Others are a closely guarded secret that are part of a healing process. My poetry from that time was most definitely part of my healing process, allowing me to scream and shout in my own way that wouldn’t disturb anyone else.
The writing I undertook during my recent illness which prompted me to leave teaching was a piece that I did long for the world to see.  A writing competition announced by Jamie Theakston fired my imagination. The remit was simple: write a story about Winnie the Pooh visiting a local landmark. Without really knowing how, the words jumped out of my pen and before I knew it I had been short listed and then crowned the Disney Winnie the Pooh Laureate for the North West! You can read my winning story here… https://apps.facebook.com/laureate-of-the-year 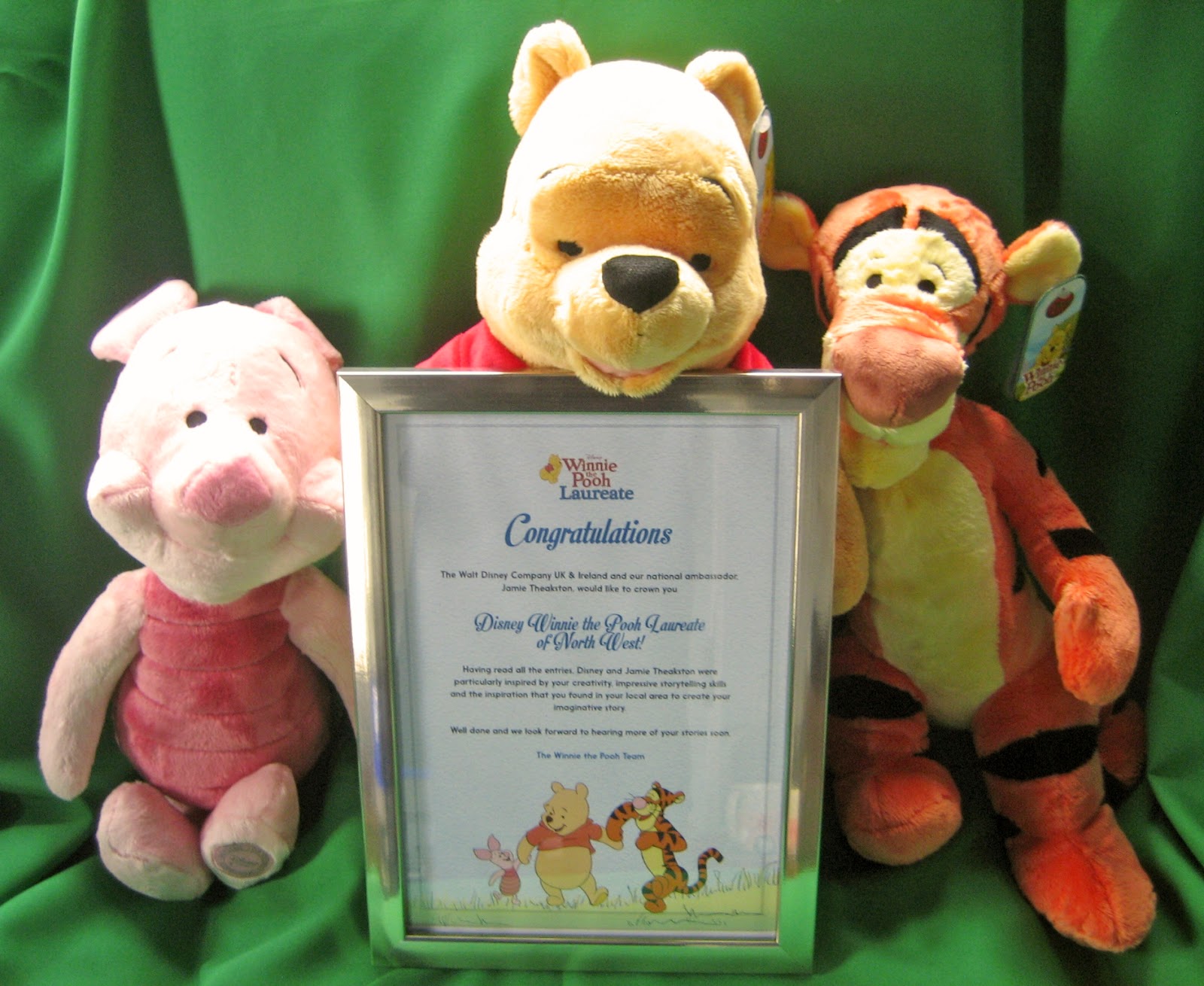 I often feel inspired to write when I am out enjoying nature.  Having grown up on the North West Coast with the smell of the Irish sea in my nostrils I am very conscious of the influence the sea has upon me.
No trip to the beach is complete without my notebook and pen.  I don’t always write on the beach but the odds are generally stacked that way.  And it really doesn’t matter what sort of beach; pebbles, cliff topped, miles of golden sand, in sun, rain, heavy wind, it’s all inspiring.  Sometimes it’s almost as if the wind, the sand and the waves are having a conversation with me.  Other times, it’s the other people on the beach who provide the dialogue, setting and characters.
Sometimes it is a throw away comment about the surroundings that prompts me. My current story is about penguins living under a pier purely because my boyfriend said he was sure Southport Zoo used to be under the pier and he thought he’d seen the penguins there.  Just for the record, the penguins have never lived under the pier at Southport (sinking sand aside, it doesn’t strike me as the perfect pad) but they live there now in my imagination and the story is starting to take shape.
But it’s not just the sea that brings my pen to life. The mountains, woods, rivers, weather have all had their say in my writing over the years.  Being out and about is VERY important to my writing.

I think it’s easier to write if you  have  a set character to write for or about. Lamby is my mascot for both Little Lamb Phonics and Little Lamb Tales and he has inspired poems and stories alike.  He has his own personality and character traits.  I know how he will react in certain situations.  I know how he likes to spend his days and who his friends are.  These are all important if you are going to write with any feeling about your character.  You have to know everything about them even if that information doesn’t get shared with anyone else. The little details are what help to shape the ideas, stories, plot and more importantly they are what make the character real!
And now Lamby is embarking on a new, exciting part of his life that I am hoping will be the inspiration for many more stories that I can share with children.  Next week, Lamby will be joining us for our first trip in our newly re-furbished VW Camper Van.  We can’t wait and although we are bound to forget various things for our first trip away the one thing that will be most definitely packed is my notebook and pen! 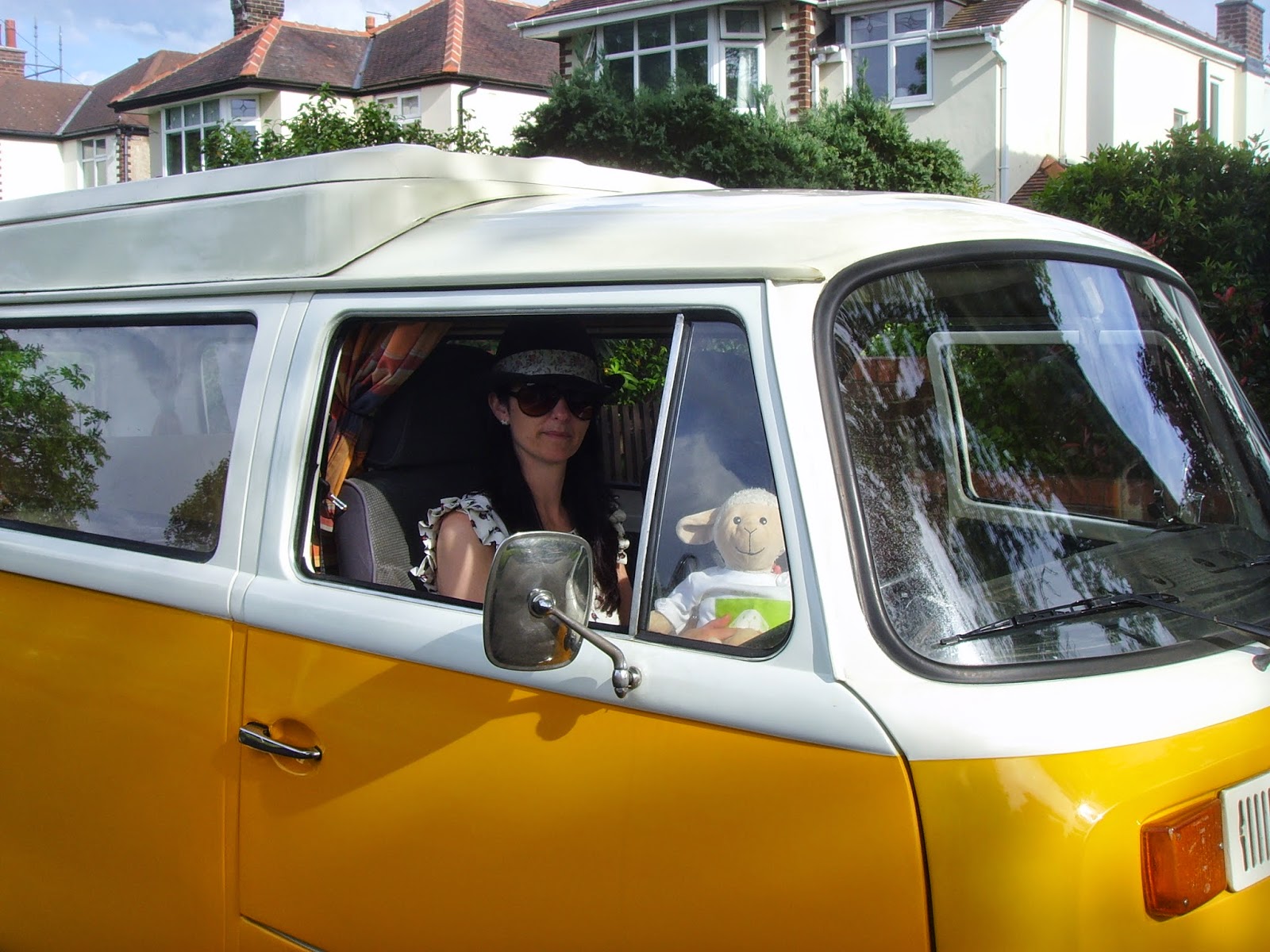